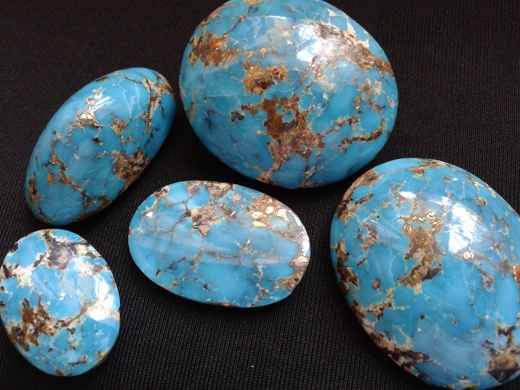 Turquoise is an opaque, blue-to-green mineral of Iranian origin, but it is sold in world markets as a Turkish product.

Turquoise is a bright blue to blue-green mineral that has been used worldwide to produce gemstones and small sculptures for over 6,000 years. Turquoise, which is rare and valuable in finer grades and has been prized as a gem and ornamental stone owing to its unique hue, was first discovered by Iran and Egypt.

Khabaronline on January 26 ran a report on Iran’s turquoise. The following is a partial translation of the report:

A turquoise mine in Neyshabur – in Khorasan Razavi Province – is the world’s largest, but the shining stones extracted from the mine are traded around the world as if they come from Turkey.

The use of traditional extraction methods – explosives – which cause irreparable damage to the mine and reduce the real value of the gemstone is one reason why the Iranian gem has been unable to live up to its name on global markets.

This comes as countries such as India and the US, whose mines are not on a par with Iran’s, use scientific extraction methods, something which has pushed up the added value in extracted products.

After India and Brazil, Iran is the third producer of decorative stones, but Iran’s Firoza [the Persian name of the gem] is known around the world as turquoise [derived from an Old French word for “Turkish”] only because it is traded in Turkey.

Iran is sitting pretty when it comes to decorative and exterior façade stones; it has about four billion tons of decorative stones with an annual production of over 13.5 million tons.

Decorative stones are found in many Iranian provinces, among them East and West Azerbaijan, Isfahan, Khorasan, Fars, Central, Hamadan, Sistan and Baluchestan, and Zanjan.

Behrooz Borna, an official with Iran’s Geological Survey Organization, says that Iran has six stocks of precious and semi-precious stones, but it has yet to make it to the world ranking.