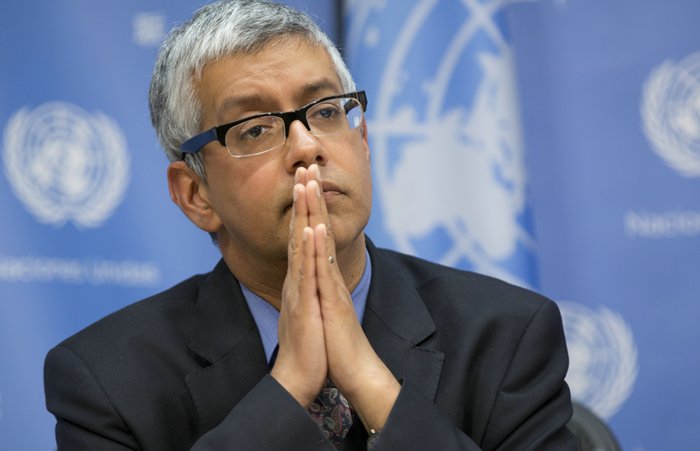 Farhan Haq, the Deputy Spokesman for the UN Secretary-General, says the US President Trump won’t be able to meet the expectations of American society unless he changes his positions.

“American political apparatus and people won’t tolerate Trump and his unpredictable, hostile policies towards the domestic and foreign issues,” said Farhan Haq, the Deputy Spokesman for the UN Secretary-General, in an exclusive interview with IRNA.

“During his first 10 days of presidency, Trump has shown his unreliable face to the people of the United States and the rest of the world.”

“American people, whether they have voted for Trump or not, expect their president to adopt coherent approaches toward problems,” he added.

However, he added, instead of encouraging the American society, Trump’s approaches make the majority of them worry about the future.

“Facing the challenge of domestic and international expectations, Trump will have to change his position; he would add to this anxiety otherwise, making the entire political apparatus, the Republican party included, confront him.”

The interviewer then referred to Trump not caring about domestic protests and strongly insisting on his positions, as well as his decision to change the US Homeland Security formation and appoint Steve Bannon, a racist politician, as a regular member of the decision-making committee, and asked Haq, “Don’t you consider such moves to be heavily damaging to the world before being confronted by the American political system?”

“I think this negligence won’t last long,” he answered. “The wave of domestic and international protests formed in Trump’s first hours of entrance to the White House will grow and urge him to revise his positions.”

He went on to say that as Trump has pointed to the improvement of the US economy and the consolidation of domestic security as his main objectives, he should inevitably keep his allies and satisfy them to be able to meet his commitments through ongoing economic exchanges and association with them.

Haq then commented that by abandoning the Trans-Pacific Partnership, Trump tightened the circle of the US trade in the world.

Trump’s decision [to abandon TPP] will give more room to China’s commercial manoeuvres, he added.

Trump and his advisors know that maintaining commercial relations with their allies is necessary for Washington’s competition with China, Haq noted.

“So they will have to care about their demands in other areas such as immigration.”

Asked about why António Guterres, the Secretary-General of the United Nations, didn’t show any strong response to the ban on visa for Muslims and Iranians, Haq noted, “Guterres, who previously served as the UN High Commissioner for Refugees, definitely considers it as a serious challenge.”

“His silence on this decision is due to a more in-depth analysis of the problem to strengthen his position against it.”