Ali Larijani: Iran will continue to back Iraq in anti-ISIL fight 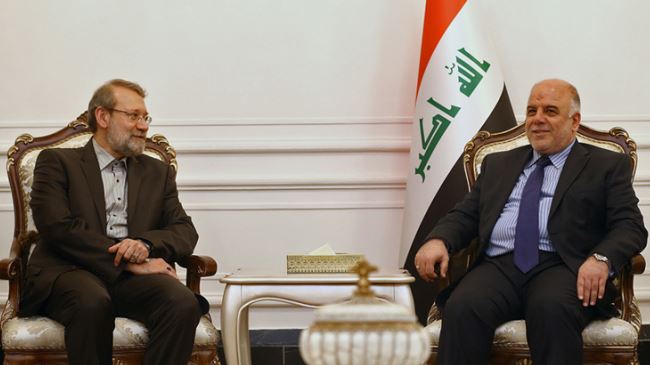 The parliament speaker says Tehran hopes those countries that have spread terrorism in the region, would change their approaches, adding Iran will continue to support Iraq in its anti-ISIL fight.

Iran’s Parliament Speaker Ali Larijani says Tehran will continue to support Iraq in its fight against the ISIL militants.

In a meeting with Iraqi Prime Minister Haider al-Abadi in Baghdad on Wednesday, Larijani expressed hope that certain countries, whose policies have spread terrorist activities in the region, would change their approaches.

The Iraqi premier, for his part, commended Iran’s full support for his country in the battle against terrorism and said Tehran has stood by the Iraqi nation in difficult times.

He added that cooperation between the Iranian and Iraqi nation would lead to a bright future for the two countries and the entire region.

The ISIL terrorists control some parts of Syria and Iraq and are engaged in crimes against humanity in the areas under their control.

Since late September, the US and its allies have been conducting airstrikes against ISIL inside Syria without any authorization from Damascus or a UN mandate.

Washington has been also carrying out similar air raids against ISIL positions in Iraq since August. However, the raids have so far failed to dislodge ISIL.