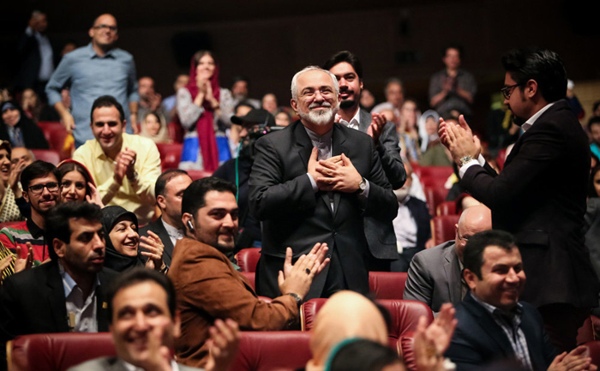 Foreign Minister Mohammad Javad Zarif attends a performance by the Alborz Symphony Orchestra to mark the anniversary of the liberation of Khorramshahr.

The Alborz Symphony Orchestra went on stage at Tehran’s Milad Tower on Saturday night to mark the anniversary of the liberation of Khorramshahr.

Foreign Minister Mohammad Javad Zarif was also invited to the concert. The audience was thrilled by his arrival while the orchestra was preparing to perform.

The audience gave Zarif a very warm welcome by chanting the slogan “Love you Zarif”.

“Where Art Thou, Divine Martyrs”, “Anfal”, “Khorramshahr Symphonic Poem” and “In Golestaneh”, all composed by Hushang Kamkar, were performed during the concert, which was part of the Iranian Composers Night program.

Before the performance, the organizers screened a video in which Hushang Kamkar explained the endeavor he undertook to compose the pieces.

He said that he had sold his wedding gifts to raise funds for recording “Where Art Thou, Divine Martyrs” in 1981.

Elaborating on “Khorramshahr Symphonic Poem”, Kamkar said that he composed the piece to praise the resistance by the people of Khorramshahr against the enemy.