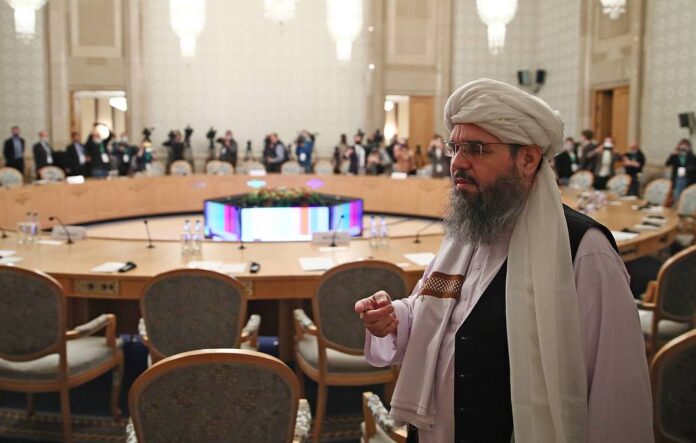 The Moscow consultations on Afghanistan has kicked off at President Hotel in the Russian capital, Moscow. Delegates will discuss the prospects of the developments related to the military and political situation in Afghanistan as well as the efforts of the international community on preventing a humanitarian crisis in the war-torn country.

The talks involve representatives of ten countries of the region, as well as a high-level delegation of the Taliban movement.

Moscow has urged the Taliban to stay committed to its pronounced pledge to refrain from using the territory of Afghanistan against third countries further on, Russian Foreign Minister Sergey Lavrov said at a Moscow format meeting on Afghanistan on Wednesday.

“We are calling upon the Taliban movement to strictly follow the policy of preventing the territory of Afghanistan from being used against the interests of any third counties, first and foremost, Afghanistan’s near neighbors — the Central Asian states. Our friends and allies. For our part we plan to use our own capabilities, including those in the United Nations, the SCO, the CSTO, and other multilateral organizations,” he added.

The Islamic State (IS) and Al-Qaeda groups seek to take advantage of instability in Afghanistan, Lavrov said.

“Numerous terror groups seek to take advantage of it [instability], first and foremost, the Islamic State and Al-Qaeda, who are once again trying to lift up their heads, carrying out bold and deadly raids in various parts of the country,” he pointed out.
According to Lavrov, the situation in Afghanistan following the establishment of a new balance of power cannot be described as stable.

“On the one hand, there is no alternative to [the new balance of power] in the foreseeable future and on the other, there is a lack of official international recognition, as well as the social, economic and financial issues and humanitarian challenges that the new Kabul authorities are facing,” the Russian top diplomat added.

Russia regrets a US delegation is absent from the Moscow format talks on Afghanistan, Lavrov said in his opening remarks.

“We regret our American counterparts do not participate this time,” he added.

Lavrov recalled that the United States dodged participation in a meeting of the enlarged troika (Russia, the United States, China and Pakistan) for a second time and voiced the hope there were no fundamental problems behind this.

“One of the possible reasons is the US special envoy for Afghanistan has been replaced,” Lavrov said, adding, “It is to be hoped that the United States remains ready to keep working on the Afghan track and the new special envoy will join the efforts, including those to be exerted following the Moscow format meeting in the context of implementing the agreements that you will achieve today, I hope”.

Russia notes the efforts of Afghanistan’s new administration to stabilize the military and political situation in the country, Lavrov said.

“We note the efforts they (the Taliban interim government) take to stabilize the military and political situation, establish the activities of the state machine,” he added.

“However, the task of achieving stable peace in Afghanistan is still relevant,” the minister noted.

“We see the formula for its successful solution mainly in the formation of a truly inclusive government, which should fully reflect the interests of all not only ethnic, but also political forces of the country,” he added.

The new balance of forces in Afghanistan “has no alternatives in the foreseeable future,” Lavrov continued, adding, “After a dramatic change of the situation it is senseless to search for those guilty of the failure to reach a tangible result in the matter of national reconciliation. I should only note that the expectations from the previous government of Afghanistan headed by former president Ashraf Ghani have not been met. Currently a new administration holds the power. This fact of life places the responsibility up on the Taliban movement.”

On August 15, Taliban fighters swept into Kabul without encountering any resistance and gained full control over the Afghan capital within a few hours. Afghanistan’s President Ashraf Ghani said he had stepped down to prevent any bloodshed and subsequently fled the country. On September 6, the Taliban declared a complete victory in Afghanistan and on September 7 formed an interim government which hasn’t yet been officially recognized by any country.

The Moscow format was created in 2017 on the basis of a six-party mechanism of consultations by special envoys from Russia, Afghanistan, India, Iran, China, and Pakistan.