AFC to Iran’s Junior Footballers: “Hold Your Heads up High”

The Asian Football Confederation (AFC) has consoled Iran’s junior football players over their early elimination from the FIFA U-20 World Cup, which is underway in South Korea, calling on them to “hold their heads up high”.

The governing body of association football in Asia and Australia (AFC) has posted a consolatory message on its Instagram page to raise Iran’s junior football players’ spirits after they were defeated by their European rival Portugal on May 27, and were forced into an early exit from the FIFA U-20 World Cup hosted by South Korea.

A dramatic 2-1 defeat to Portugal on Saturday – the last match-day of the tournament’s group stage – saw Iran finish bottom of Group C with only 3 points from their opener against Costa Rica.

Quoting a tweet by Fédération Internationale de Football Association (FIFA) about the match, AFC has told Iranians in its post: “Hold your heads up high Iran!”

FIFA’s message also reads: “Portugal came from behind to break Iran hearts and see them eliminated in a dramatic climax to Group C.” 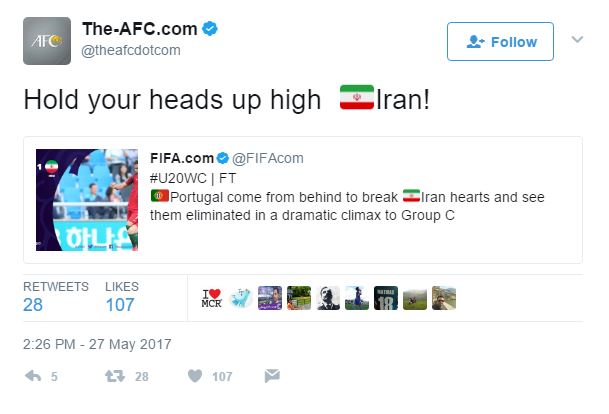 Iran opened the scoring just four minutes into the match when Reza Shekari found space at the near post to head in Ali Shojaei’s corner kick for his third of the tournament.

Portugal then were forced to take the initiative in searching for a goal while Iran sat in a compact defensive posture. That was effective until Diogo Goncalves scored a superb equaliser in the 54th minute. Portugal then created the majority of chances until in the 86th minute, they found the goal that kept their campaign alive.