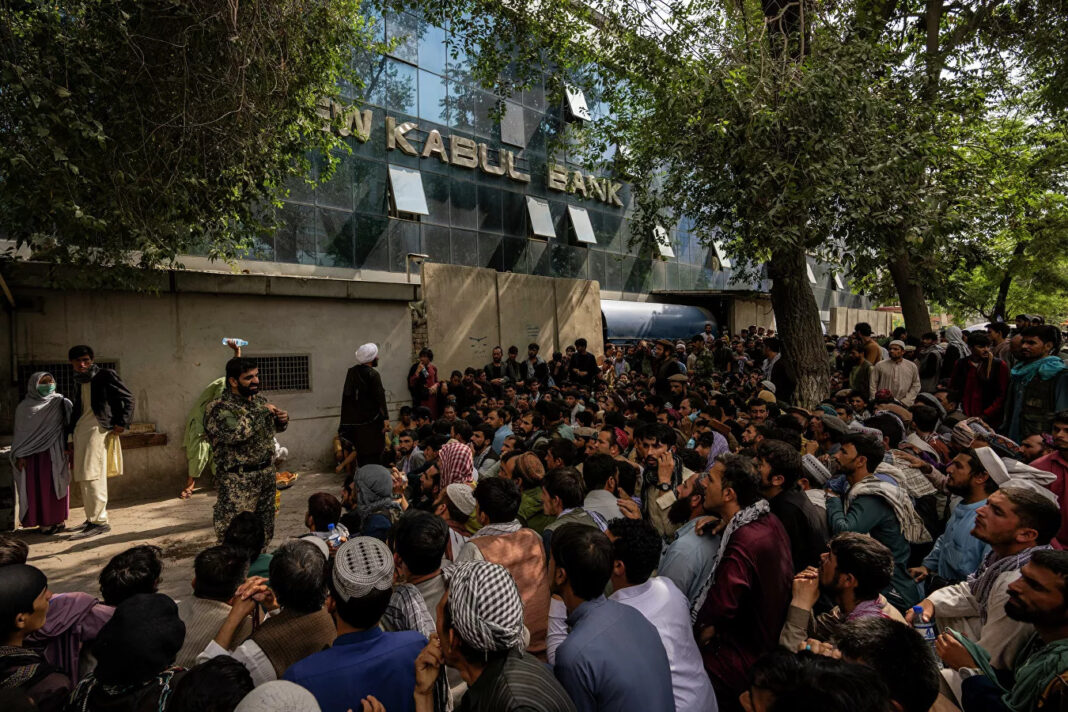 Activists describe US President Joe Biden’s decision to seize the Afghan central bank’s funds in the United States as “theft”.

Biden issued an executive order on Friday that would split $7.1bn belonging to Da Afghanistan Bank (DAB) almost evenly between humanitarian assistance to the struggling country and funds to cover judgements from lawsuits that 9/11 victims and their families had filed against the Taliban in US courts.

“The people of Afghanistan had nothing to do with 9/11; that is an undeniable fact,” Bilal Askaryar, an Afghan-American activist, told Al Jazeera.

“What Biden is proposing is not justice for 9/11 families, it is theft of public funds from an impoverished nation already on the brink of famine and starvation brought on by the United States’ disastrous withdrawal,” Askaryar added.

The US-backed Afghan government collapsed in August of last year, with the Taliban capturing Kabul amid the pullout of US troops from the country after a 20-year war.

Washington, which had negotiated its withdrawal with the Taliban, quickly moved to freeze DAB’s US-based assets. The 9/11 victims’ families then sought the money through the courts. One particular case that had obtained a default judgement against the Taliban in 2012 became central in that effort.

The plaintiffs originally sued a host of entities and individuals across the Middle East and Afghanistan – many at odds with one another and adversarial to al-Qaeda, which carried out the attacks in 2001.

Halema Wali, cofounder of Afghans for a Better Tomorrow, a US-based advocacy group, stressed that the money in the Afghan central bank belongs to the people of Afghanistan, who are experiencing a dire humanitarian crisis.

With skyrocketing inflation and the state institutions in shambles, the Afghan economy – which has depended on foreign aid – is all but falling apart. The UN World Food Programme has warned that 23 million people are facing “severe hunger” in the country.

“It’s absolutely egregious,” Wali told Al Jazeera of Biden’s move, adding, “This is equivalent to essentially saying the central bank of Afghanistan can’t function, but we’re going to set aside some money for a little bit of food for a starving population. I think overall, it’s very short-sighted.”

It remains unclear how that money would be dispensed with several lawsuits making claims to the funds. Plaintiffs may also reject Biden’s decision and seek the entire sum, and courts would have to decide on the outcome, which would be subject to appeal.

Still, the White House suggested that regardless of what happens in the courts, at least $3.5bn will be set aside for 9/11 victims’ families.

“Even if funds are transferred for the benefit of the Afghan people, more than $3.5 billion in DAB assets would remain in the United States and are subject to ongoing litigation by US victims of terrorism,” the White House said.

“Plaintiffs will have a full opportunity to have their claims heard in court,” it announced.

But for now, the final word on unfreezing the money for humanitarian aid and compensation to the 9/11 victims remains with the courts.

A senior administration official told reporters early on Friday that it will be months before the money is released for humanitarian relief in Afghanistan.

Another issue that adds to the uncertainty surrounding the fate of the funds is that Washington does not recognise the Taliban as the government of Afghanistan.

“There’s a legitimate question to be asked as to how a country’s sovereign wealth can be used to satisfy the debt of an entity that is not recognised as the sovereign government,” said John Sifton, Asia advocacy director at Human Rights Watch (HRW).

“The Biden administration’s decision creates a highly problematic precedent for a policy of essentially commandeering a country’s sovereign wealth and utilising it for things that are not what the people of Afghanistan necessarily want it to be used for,” he added.

The Afghan-American Foundation, an advocacy group, said Biden’s move will “exacerbate the suffering” of the people of Afghanistan.

“The funds at issue belong to the people of Afghanistan, not any government or entity, past or present – that is not a policy position, it is a fact,” the group announced in a statement.

The Taliban, which had been calling for unfreezing the funds, slammed the US decision on Friday.

“The theft and seizure of money held/frozen by the United States of the Afghan people represents the lowest level of human and moral decay of a country and a nation,” Taliban spokesman Mohammad Naeem said on Twitter.

Beyond the immediate value of the money, advocates have sounded the alarm about the message that Biden’s decision sends on the viability of banking in Afghanistan.

Sifton stressed during the HRW virtual event that Afghanistan needs a banking system for its economy to function and aid to flow efficiently, underscoring that Afghan banks can be monitored internationally to ensure that funds are not being siphoned off by the Taliban.

“Current restrictions on the banking system of Afghanistan are really intensifying the country’s already serious human rights crisis and they’re driving populations into famine,” he said.

Sifton added that a functioning banking system is vital for aid delivery, importing and legitimate commerce in Afghanistan.

“Most importantly for a country, which imports a very large amount of its food and essential resources, is to be able to deposit money into banks, turn it into dollars and have those dollars be able to be used to purchase things outside the country for import,” Sifton continued.

Wali, of Afghans for a Better Tomorrow, said DAB is an independent institution and that humanitarian aid cannot replace the country’s central bank.

“This is essentially like saying the Federal Reserve can no longer function, but we’re going to set up some soup kitchens, which doesn’t necessarily alleviate the issues of a central banking system not working in Afghanistan,” she noted.