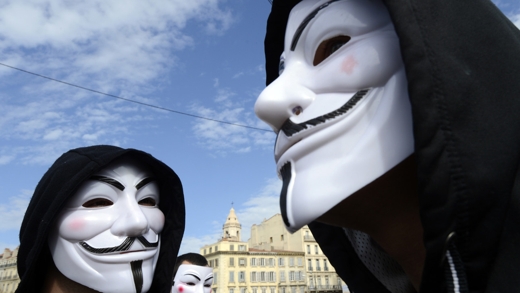 Ghost Security, a hacking group, says its mission is to eliminate the online presence of extremist groups such as ISIL, stymie their recruitment and limit their ability to organize international terrorist efforts.

We are the ghosts that you created. We continue our fight. We will not rest until we eliminate them [the terrorist groups] and their manifestations from the net. This is the main message of Ghost Security, a cyber-group which was founded after Charlie Hebdo’s offices [a French satirical weekly magazine] were attacked by fundamentalist elements and has now expanded its activities to other areas. The [hacking] group, which targets ISIL affiliated accounts, says its mission is to remove extremist groups, ISIL in particular, from cyberspace and stymie their recruitment and limit their ability to organize international terrorist efforts. 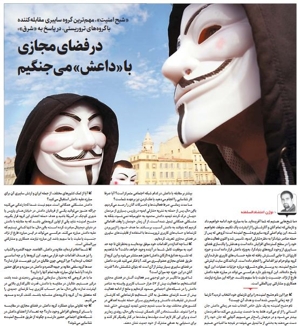 The group of hacktivists has extended its activities and taken measures against accounts of Boko Haram [an extremist group based in northeastern Nigeria] supporters. The online group has answered questions asked by Sharq daily’s Nozhan Etezad Saltaneh.

Ghost Security says everybody – regardless of their race, gender or nationality – can join the anti-terror group in its fight against ISIL, arguing that the anti-ISIL fight needs international cooperation and partnership. The following is the translation of part of the interview Sharq daily published on September 15:

Q: Does a foreign (Western or Arab) government support you? Who supports you? Where is the source of the finances your website receives?

A: Currently, no government supports our measures against ISIL. The success of our operations is credited to the financial support we get from our backers.

A: When we trace a terror plot against governments and nations, we analyze the intelligence on that plot. If it poses an imminent threat, we contact the officials of the countries which might be exposed to that threat and let them in on it. They can take necessary measures to foil the plot or capture suspected individuals or groups.

We are primarily an intelligence and cyber-attack source which monitors the activities of ISIL operatives and their relatives. We cannot foil ISIL attacks without contacting government intelligence agencies. To stop that group’s plans, we direly need to tap into the legitimate use of force which is only available to governments. We can simply intercept [their plots].

Q: Do you welcome assistance by different countries, including Iran and its Cyber Army, to take on ISIL?

A: ISIL is a global problem. Wherever you live does not matter because you can still be a victim of ISIL attacks; in a Paris street or a small town in the US, you can be targeted by members of this group.

Ghost Security is perhaps one of the first groups to embark on countering ISIL in the digital world, but we are not the only people who are fighting against ISIL. Irrespective of race, gender and nationality, everybody can join the fight [against ISIL]. This fight takes international partnership [to prove effective].

Q: You have said that in addition to ISIL, you will target Al-Qaeda, the al-Nusra Front [a militant group in Syria] and Al-Shabaab [an al-Qaeda affiliate in Somalia]. What have you based your picks on? How come a group like the Taliban is not on your list? There are hundreds of Salafi groups – in addition to al-Nusra Front and ISIL – in Syria and Iraq. Can you take on all of them?

A: We are engaged in [a fight against] any group which has been registered as a terrorist organization. Compared with ISIL, the Taliban hold little sway on the Internet. We discover and block any new website or account which belongs to ISIL or similar groups.

Q: How does the online performance of ISIL differ from that of other extremist groups? How many ISIL members are active on social networking sites? How are they intercepted by Ghost Security?

A: ISIL fares better than any other terrorist groups in organizing and managing its presence on social networking sites and websites. It has managed to relay its message in the cyber world and recruit new members. That’s why we have focused our attention on this group’s activities. Nonetheless, if we discover a website or account with links to other terrorist groups, we will take action against them as well.

Q: Are you going to take on non-Islamic or non-religious fundamental groups made up of Christian, Buddhist or Neo-Nazi extremists?

A: Currently it is not on our agenda, but perhaps in the future.

A: We aim to continue the fight against ISIL and other terrorist groups until we can completely foil their online activities and cause them to lose their effectiveness on the web. We fight against ISIL in the virtual world so that human lives can be saved and protected in the real world and on the ground. We will go ahead with our fight and we will not rest until we eliminate the terror group and its manifestations on the Internet. We are the ghosts they have created.