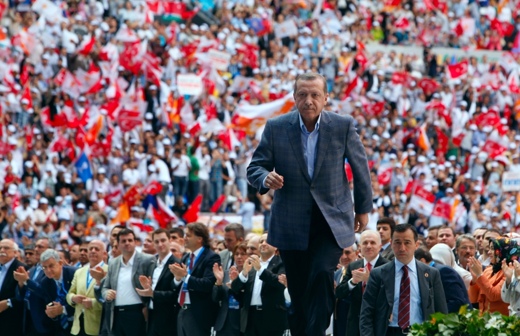 An Iranian daily has reviewed the blow President Erdogan was delivered in the parliamentary vote and said that the Turkish people could properly practice democracy and contain the president's authoritarian ambitions.

Turkey’s parliamentary election is one of the main developments in the Middle East region after Iran’s presidential elections in 2013 and the death of King Abdullah of Saudi Arabia last winter [in January 2015]. In Iran and Saudi Arabia the makeup of the political structure underwent significant change domestically, so did foreign policy inclinations as a result.

Taadol newspaper on June 9 published an analysis by its International Desk editor Narjes Khatoon Barahouee on the Turkish parliamentary elections which were held two days earlier and the severe setback President Recep Tayyip Erdogan and his ruling party suffered in the vote. The piece also compares the changes Turkey can undergo after the vote with the developments in Iran (after the 2013 presidential elections) and Saudi Arabia (in the wake of the death of King Abdullah), and tries to predict the effects a post-elections Turkey could bring about in the region.

The following is the translation of part of that analysis:

The government which rose to power in Iran took steps toward deescalating foreign policy, including talks with Western countries over its nuclear case […]

Following the death of King Abdullah in Saudi Arabia, however, the new king and his son who serves as the kingdom’s defense minister have brought the Al Saud family out of it historical conservatism shell. The newcomers – who have yet to find their feet in their new positions – started to overpower their uncles and cousins on the father side and then got locked in a bitter and adventurous war with Yemen whose impacts on the kingdom are, at best, uncertain.

What happened in Turkey was different from Saudi Arabia but more similar to Iran’s. Despite his remarkably close economic cooperation with Iran, President Erdogan found his foreign policy closer to Saudi Arabia and in confrontation with Iran. In the capacity of president, he was seeking more power so that he could manage Turkey the way he liked. He had even made preparations for that by building a new presidential palace which was inspired by the Ottoman Empire.

Large segments of Turkish society as well as foreign observers were sensing the risk of dictatorship hanging over one of the most dynamic societies in the Middle East, a society whose economic growth and democratic system had turned it into an excellent role model of progress for other nations to follow.

These concerns have been the reason behind resistance by people and political forces in Turkey in recent years in the face of Erdogan’s adventurism. The same concerns caused people not to let the president and his ruling party garner the handsome majority they had secured over the past 13 years in an election which has been named as the most surprising and high-stakes vote in Turkey’s recent history. Not only did they shatter and bury Erdogan’s dreams, but they also spread the good news that the Turkish vote will bring blessings for the country’s parliament and the entire region.

Violating the law, Erdogan had hit the campaign trail dauntlessly and openly asked people to vote for the Justice and Development Party (AKP). Following the election [in which he and his party were dealt a serious setback] he said with a bit of humility that one single party cannot rule in Turkey.

What he said shows how the popular will can affect a country’s fate. In other words, the Turkish people – especially those who are opposed to and critical of Erdogan – were given the opportunity to prove themselves in the eyes of an angry president who denies his opponents and critics and have in recent years constantly threatened his opponents and imprisoned his critics, and salvage the country from the brink of dictatorship.

That’s why the recent elections in Turkey can be seen as a turning point in this country’s contemporary history, a point which could avert the country’s plunge into authoritarianism Erdogan had in mind and flaunt the difference between Turkey and other regional countries such as Egypt.

Although the political fate of Turkey hangs in the balance – if the AKP fails to form a coalition government with another party, another election should be held or a minority government should be forged – one thing is certain: June 7 parliamentary elections showed that democracy has been institutionalized in Turkey and that this relatively well-established democracy with eagle eyes will not allow an individual or a group to go beyond the frameworks envisioned in the Constitution and call themselves the manifestation and embodiment of the country and its interests.

Turkey’s elections will leave positive impacts on the region too, because the parliamentary vote can mark the beginning of a shift in the country’s foreign policy. Turkey and Iran, which are two key players in the Middle East, share political and economic interests in a calm region where peace takes hold.

The ruling party in Turkey has to rethink its dangerous and reckless foreign policy if it ever seeks to do something for its dwindling popularity. Any change in Turkey’s policies such as ending support for terrorist groups in Syria can help gradually restore peace and stability in the region and stop the spread of instability – the conflicts in neighboring Syria and Iraq are just one example – into Turkey.

Although nationalism cannot be a good talking point these days, Turkey’s elections, the lineup of [various] parties and a consensus by different political forces – from the leftists to those with tribal leanings – to stand up to Erdogan’s totalitarianism and put a national issue over communal and tribal demands are all a symbol of nationalism in this country.