A Round-up of Evidence Showing ISIS Created by US 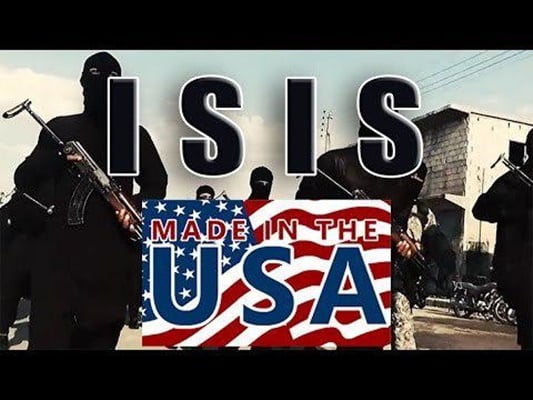 An Iranian news agency has listed piece of evidence that show ISIS terror group was nurtured and protected by the US in recent years.

Last Wednesday, Leader of Iran’s Islamic Revolution Ayatollah Seyyed Ali Khamenei talked about the United States’ key role in creating and supporting the ISIS terrorist group, saying that the issue “was openly mentioned by the current US president in his election campaign. Of course, we were aware of this before.”

“We had some information showing that they were helping ISIS in Iraq in various cases. The Americans helped ISIS sell oil and break the sieges that had been planted,” the Leader said.

Following the remarks, Mizan News Agency on Tuesday published a round-up of all the evidence that prove the US role in creation and promotion of ISIS terrorist group.

Following is an excerpt of the report’s evidence:

1- According to documents leaked by Edward Snowden, the former employee at US National Security Agency, the British, American and Israeli intelligence worked together to create ISIS.

The operation, codenamed Hornet’s Nest, was a plot to disintegrate West Asian countries and protect the Israeli regime.

Snowden said ISIS was created to attract all extremists of the world.

According to the project, the Americans freed a former Al-Qaeda affiliate named Ibrahim al-Badri from an Iraqi prison in 2004 and radicalized him at US-run detention centre Camp Bucca near Kuwait’s border from 2005 to 2009.

The Iraqi national, was then released to form a group made of former Al-Qaeda affiliates in Iraq and become its leader, Abu Bakr Al-Baghdadi.

The intelligence services worked to spread ISIS propaganda across the world and help bring extremists to Syria.

2- The US forces then started aiding ISIS forces and enabled their rise in Syria and Iraq.

The US troops did nothing to stop thousands of ISIS troops using Toyota pickups to carry out a lightning offensive in 2014 that brought large swathes of Iraq under their control.

In another major instance, the US watched ISIS fighters, vehicles and heavy equipment gather on the outskirts of Ramadi before the group took the city in May 2015.

According to US intelligence and military officials speaking to Bloomberg on the condition of anonymity, the US had significant intelligence about the pending Islamic State offensive in Ramadi and for them it was an open secret even.

This is while the US could at least launch airstrikes against the convoys before the battle started. It left the fighting to Iraqi troops, who ultimately abandoned their positions.

Separately, there are reports that Americans have helped Baghdadi to escape from Mosul, the last major stronghold of the terror group in Iraq, when it was being freed by Iraqi forces last year.

An Iranian documentary aired last month sheds light on Washington’s overt and covert support for the ISIS terrorist group in Iraq and Syria.

Named Lord of War, the documentary includes footage retrieved from US drones monitoring ISIS that how Washington aided the terrorist group by not doing anything against its military and economic activities despite its tactical, military and intelligence supremacy.

3- The US was flooding so-called “moderate” militants fighting to bring down the Syrian government with weapons.

But thousands of individuals receiving US aid were turned out to be ISIS members.

A study by Conflict Armament Research (CAR) said last year that sophisticated weapons the US secretly provided to the moderate militants fighting the Syrian government quickly fell into the ISIS hands.

In one instance, the former security head of the Syrian sector of the US base of At Tanf near the border between Syria and Iraq told Sputnik news agency that militants affiliated with the Free Syrian Army training at the base were selling US munitions to ISIS.

“When we found out about this, we told the Americans about it. However, they started to support the commander they placed above us even more. [Militants] sold US-made weapons, vehicles, antitank grenade launchers, M-16 rifles, a large number of them,” Muhammad Assalam said.

4- The US has directly aided ISIS in Syria by bombing Syrian military assets during its attacks.

Several attacks by US air forces against Syrian positions have been followed by ISIS attacks, including an attack to Syrian troops in Deir al-Zour in 2015.

In one of the latest shows of support, the US has threatened to intervene to prevent an operation by the Syrian government to clean up the southwest region of Syria around the city of Dara

The US move should be interpreted as protection for terrorists, as the region is infested with a large number of ISIS terrorists as well as al-Qaeda and associated groups.

5- US President Donald Trump frequently attacked former secretary of state Hillary Clinton and former US president Barack Obama for the rise of ISIS during his election campaign in 2016.

Trump said the two officials have in fact “created ISIS”.

“ISIS is honouring President Obama,” he once said. “He is the founder of ISIS … And I would say the cofounder would be crooked Hillary Clinton.”

6- Last Thursday, US Senator Rand Paul said in a meeting between the newly-appointed US Secretary of State Mike Pompeo and members of the Senate Foreign Affairs Committee that the US has indirectly armed ISIS.

Paul referred to an email leaked last year by WikiLeaks in which former White House Chief of Staff John Podesta told former Secretary of State Hillary Clinton that the US “must stop Saudi Arabia and Qatar from funding ISIS.”

The senator said the remarks indicate the US has been aware “ISIS is getting weapons from Qatar and Saudi Arabia” and yet it has sold the two oil-rich kingdoms huge caches of weaponry.

7- Last year, the former top US diplomat Henry Kissinger warned the Trump administration that defeating ISIS was not to the US interests, as Iran could fill the power vacuum left after the collapse of ISIS.

The 94-year-old Kissinger, who served as secretary of state under Richard Nixon, cautioned that defeating ISIS could lead to a “radical Iranian empire” across the Middle East.

Of note, Clinton has famously acknowledged the US role behind the creation of Taliban in Afghanistan in 1980s, as a bid to push soviet forces out of the country.

There is no reason not to believe the US could have devised a similar plan to target its enemies, including the Syrian government.