A Look at Iranian Newspaper Front Pages on April 13

IFP has taken a look at the front pages of Iranian newspapers on Saturday, April 13, 2019, and picked headlines from 15 of them. IFP has simply translated the headlines and does not vouch for their accuracy.

Iranian papers today widely covered the Iranian nation’s support for the Islamic Revolution Guards Corps and their condemnation of the US’ move to blacklist the IRGC.

The ongoing rescue and relief efforts to help the flood-hit people of Khuzestan and Lorestan provinces also received great coverage in today’s papers.

Abrar:
1- Zarif: Without IRGC, ISIS Would Arrive at Gates of Europe
2- Syria’s UN Envoy: All States, Except for Iran, Russia, Must Leave Syria
3- Mike Pence Accuses Iran of Interfering in Venezuela Affairs 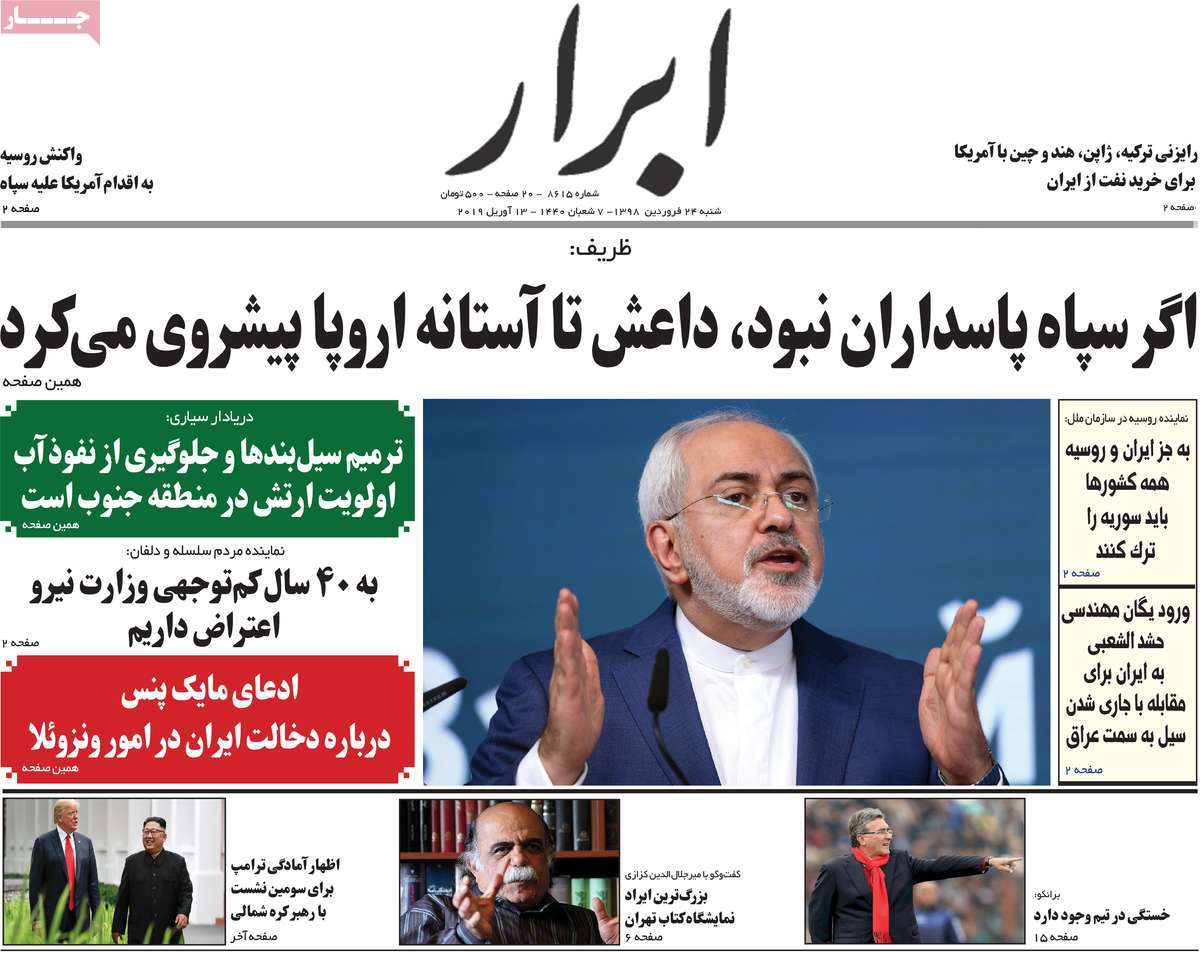 Aftab-e Yazd:
1- Netanyahu to Pave the Way for Trump’s Victory in 2020?
2- Domino of Overthrow of Dictators in Africa
3- Assange Arrested: A Defendant or a Hero? Arman-e Emrooz:
1- National Support for IRGC: Demonstrators Hold Rally against US’ Move in Iran
2- US Congress Opposed to War with Iran
3- Unemployment to Exacerbate Immigration Problem 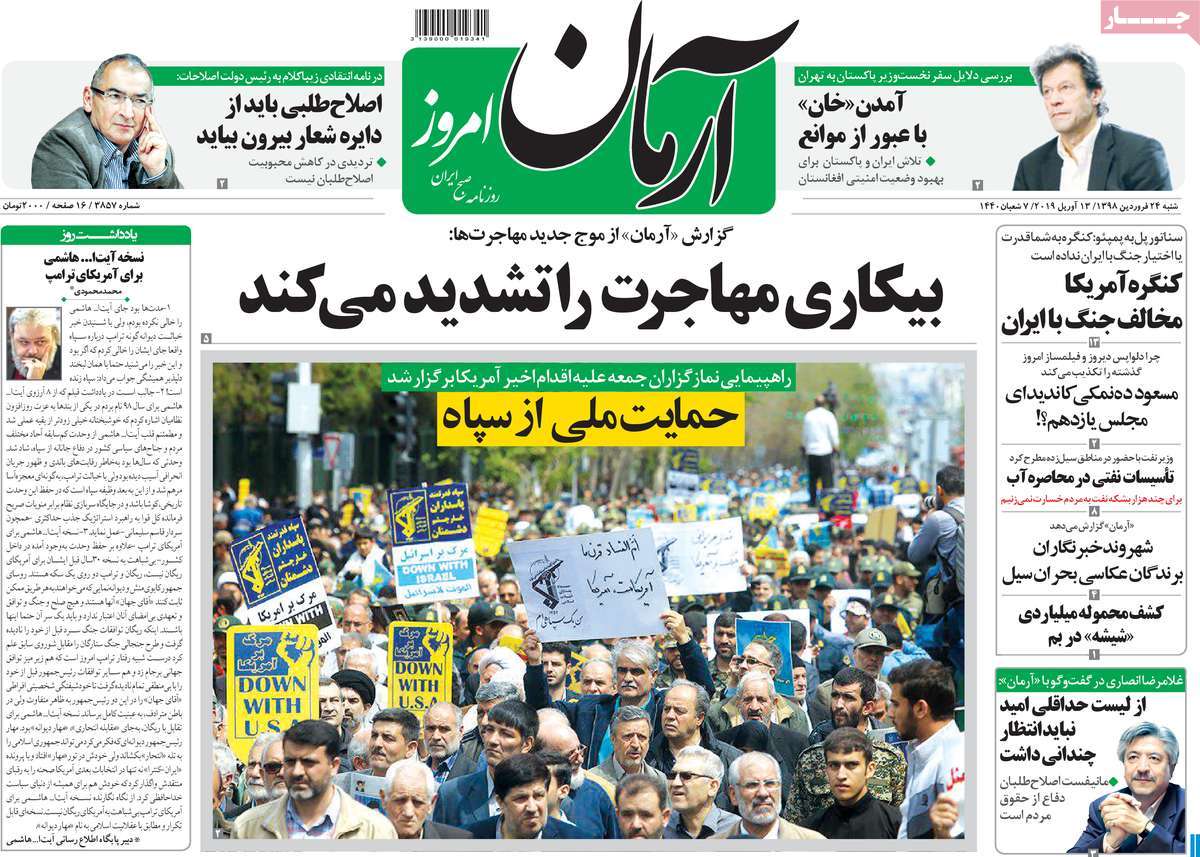 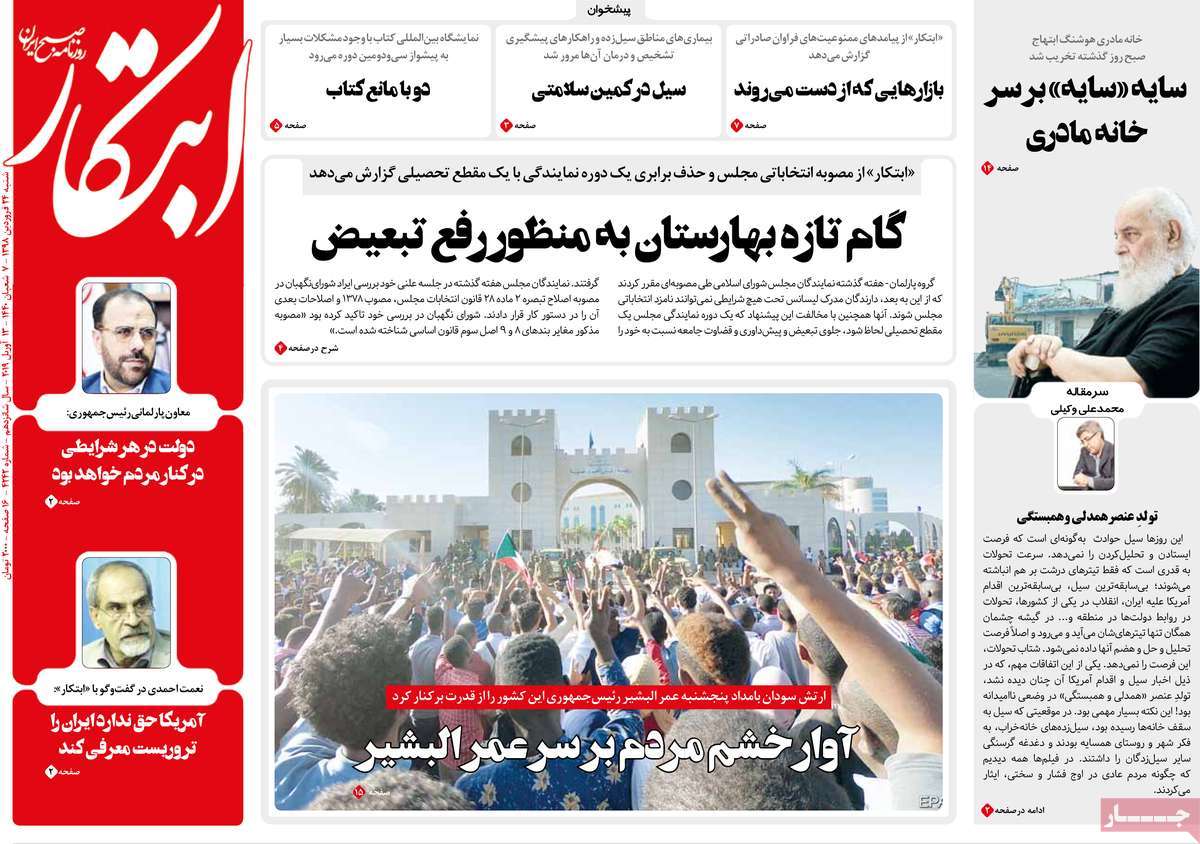 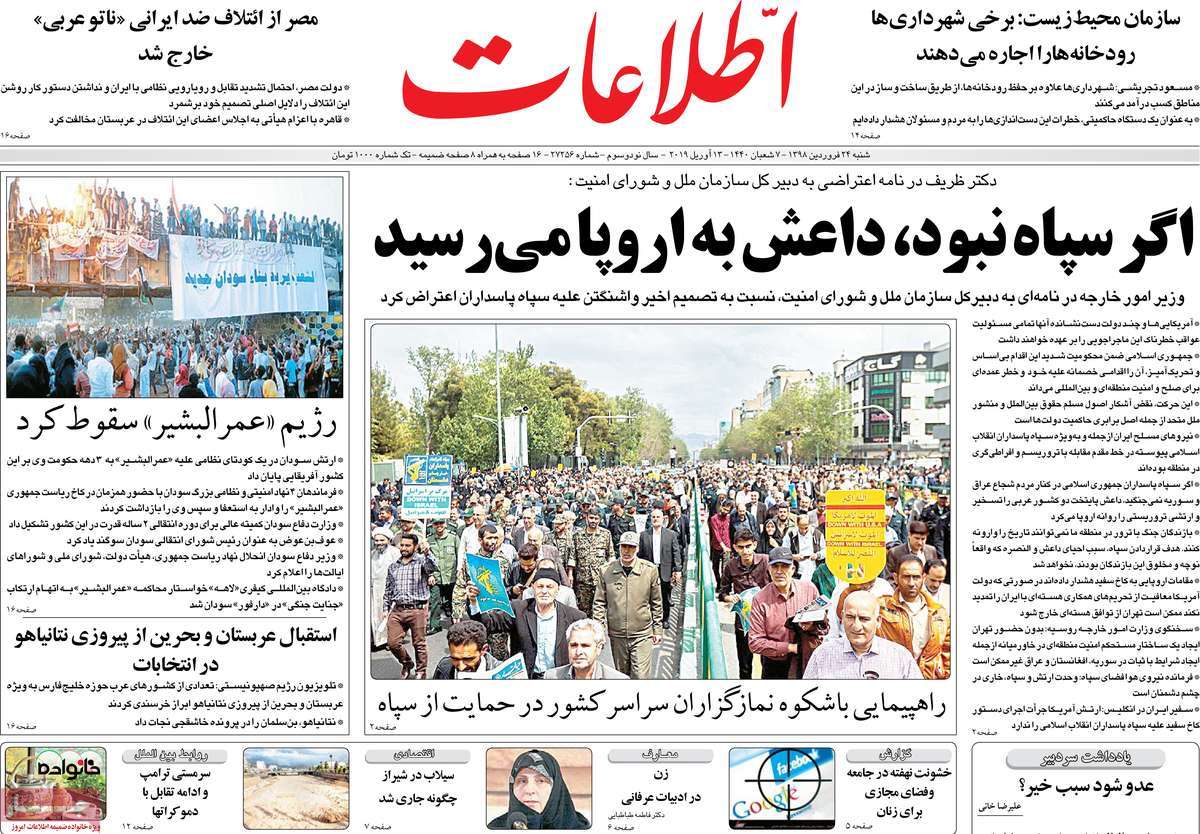 Jame Jam:
1- Epic Resistance of Iranian People in Khuzestan against Flood
* Reminiscent of Eight-Year Sacred Defence against Iraq
2- Worn-Out Game of Politics in Horn of Africa 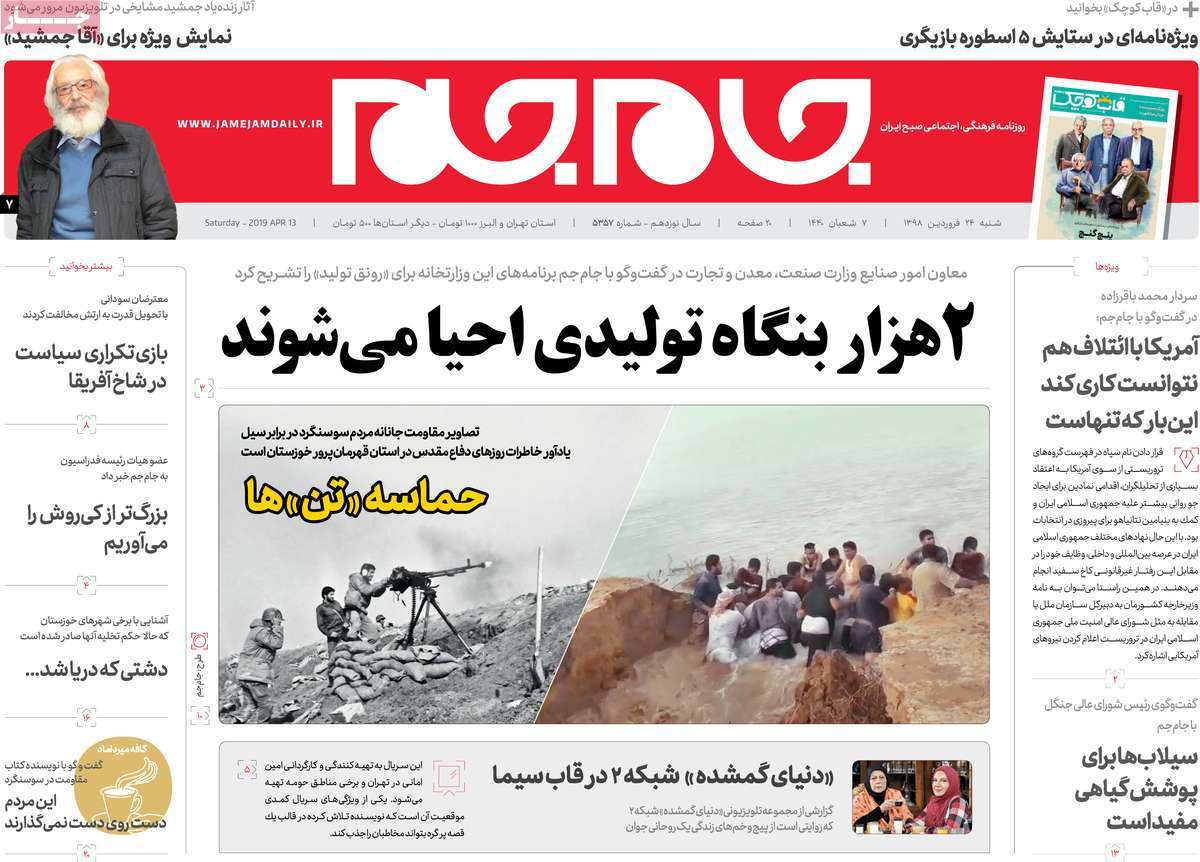 Javan:
1- People: We’re All IRGC Members
* Worshippers in Tehran Hold Rally in Support of IRGC
2- British Claw into Throat of the One Who Disclosed US Crimes
3- People of Khuzestan Fighting Flood One on One 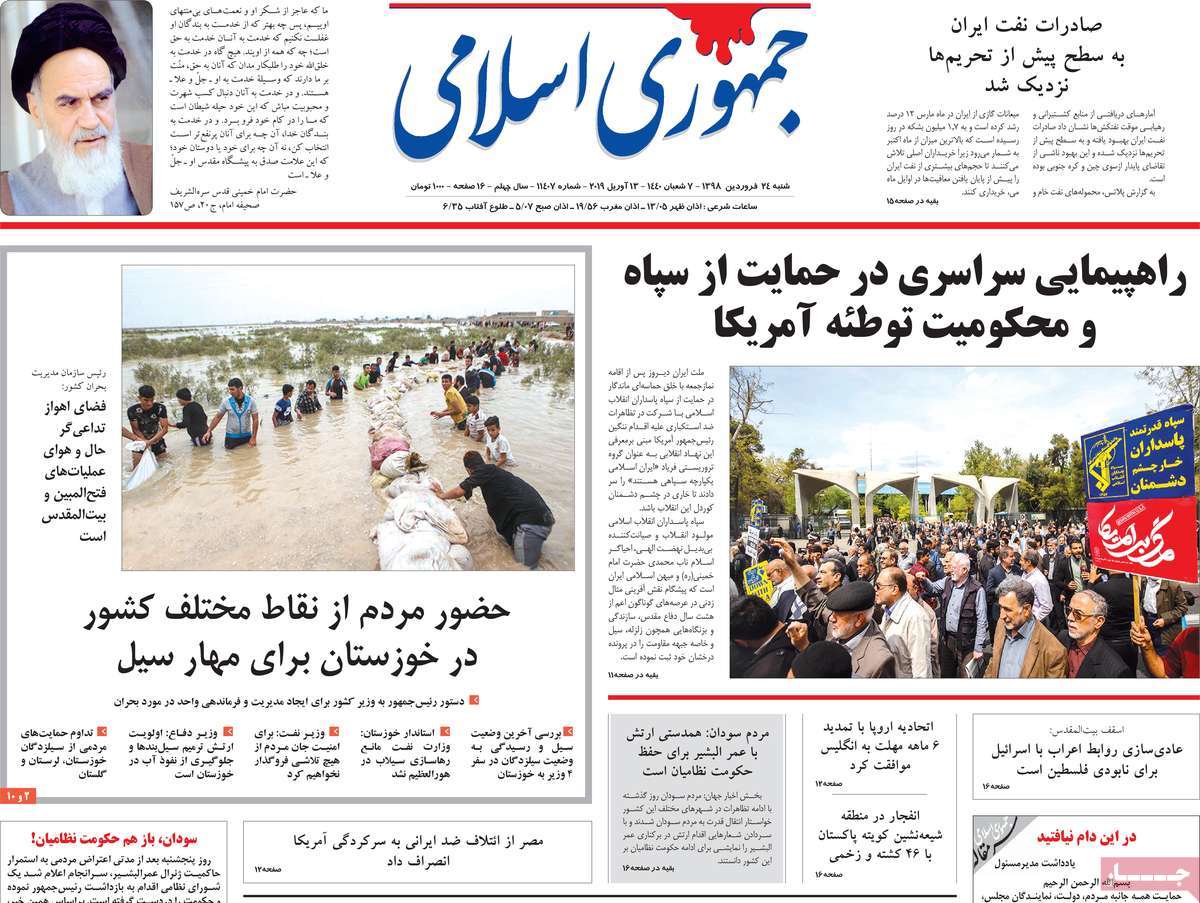 Kayhan:
1- Entire Iran against US in Support of IRGC
2- Defenders of Shrines from Iraq, Afghanistan, Pakistan Rush to Help Flood-Hit People of Khuzestan, Lorestan 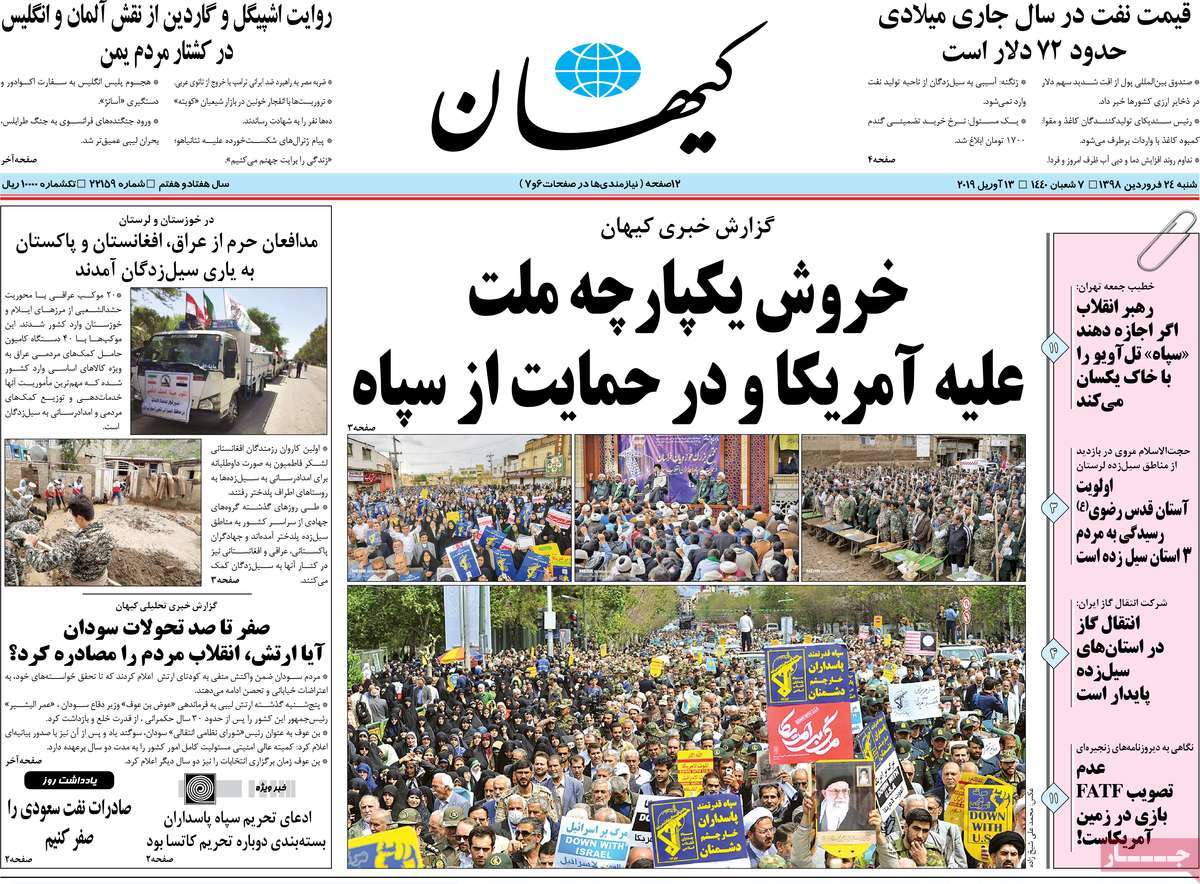 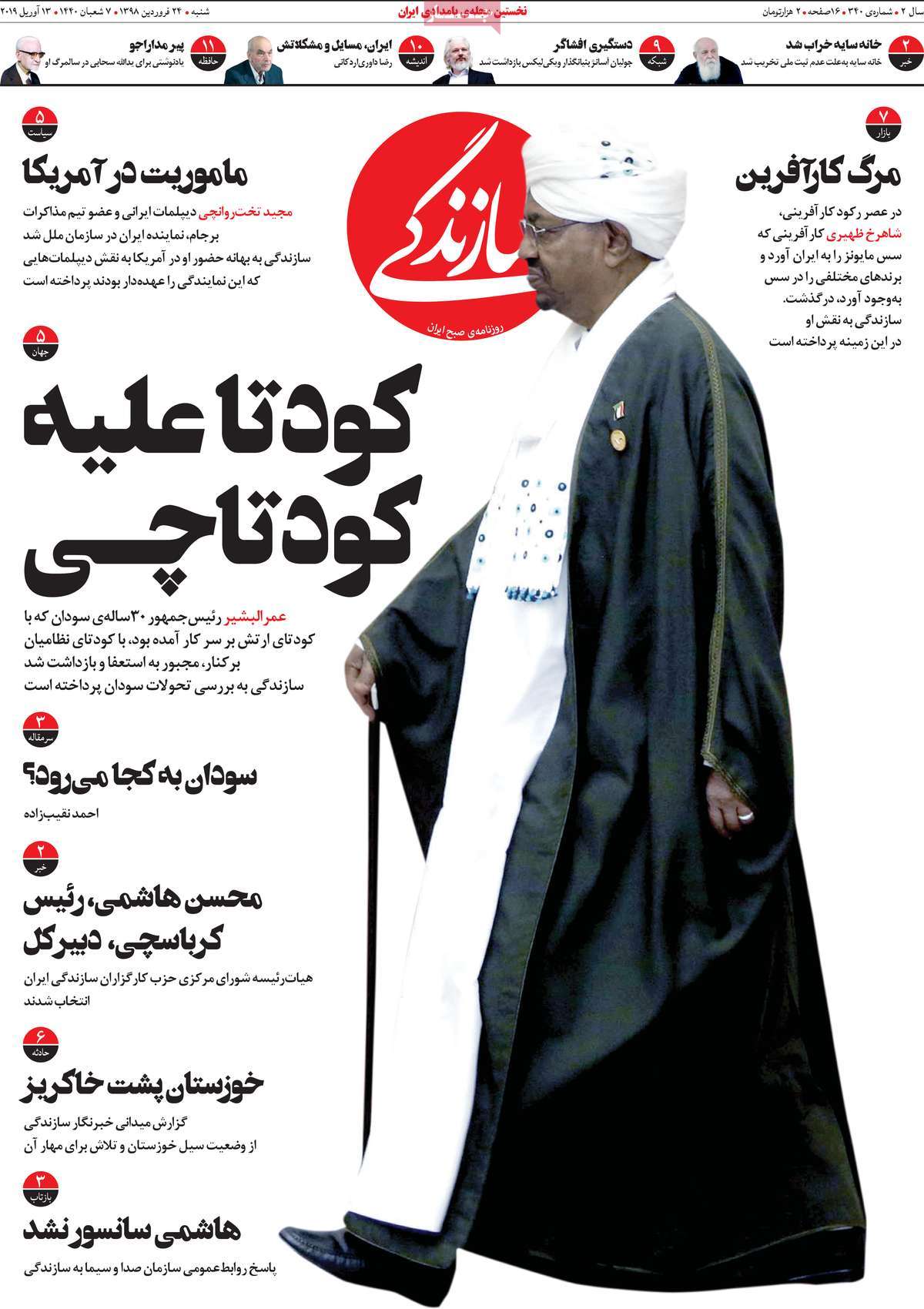 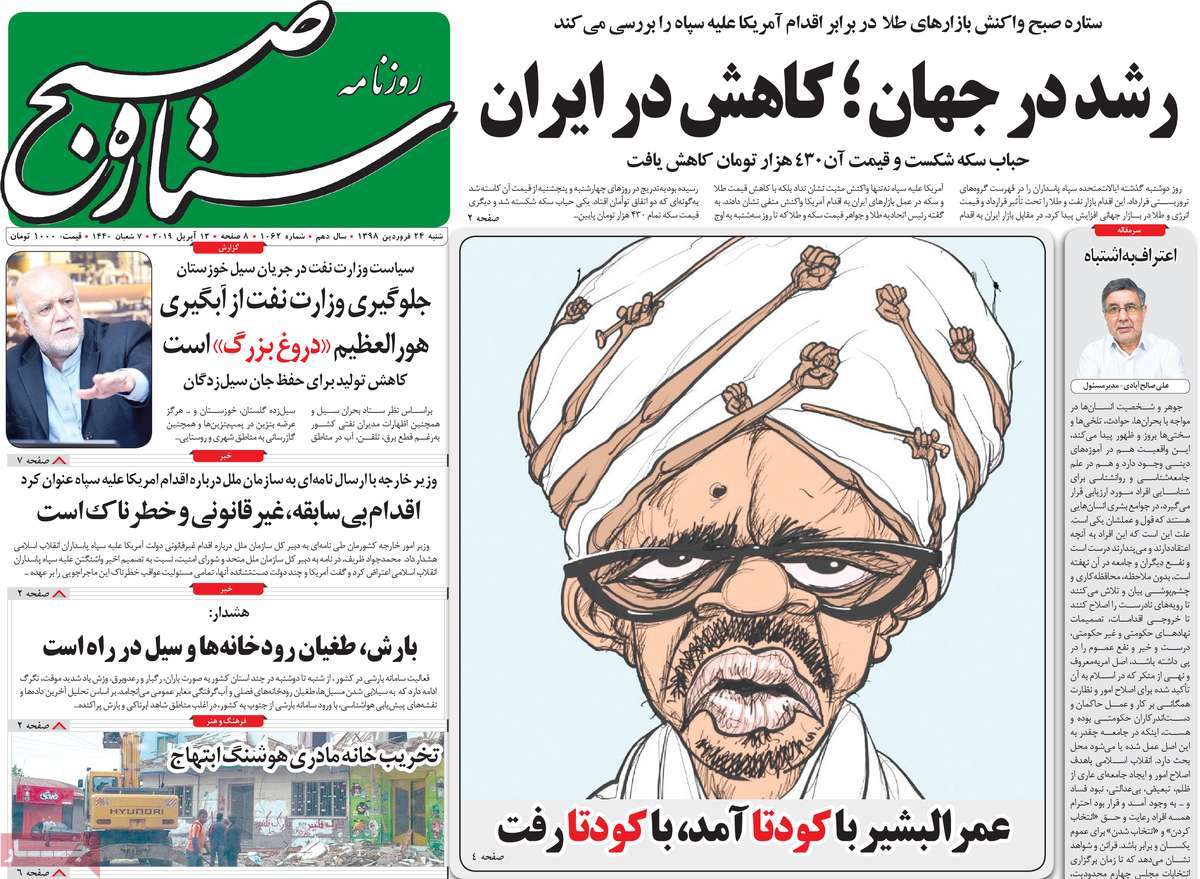 Shahrvand:
1- Cinema, TV Artists Raise Money for Flood-Hit People at Cinema Azadi
2- Third Wave of Relocation in Khuzestan
* Some Leaving Khuzestan for Tehran, Hormozgan, Other Safe Places to Stay Away from Flood Shargh:
1- We Didn’t Have Any Talks with US after JCPOA: Iran Envoy to UK
2- Tehran Friday Prayers Leader: IRGC Can Annihilate Tel Aviv If Leader Permits
3- Sudan without Dictator 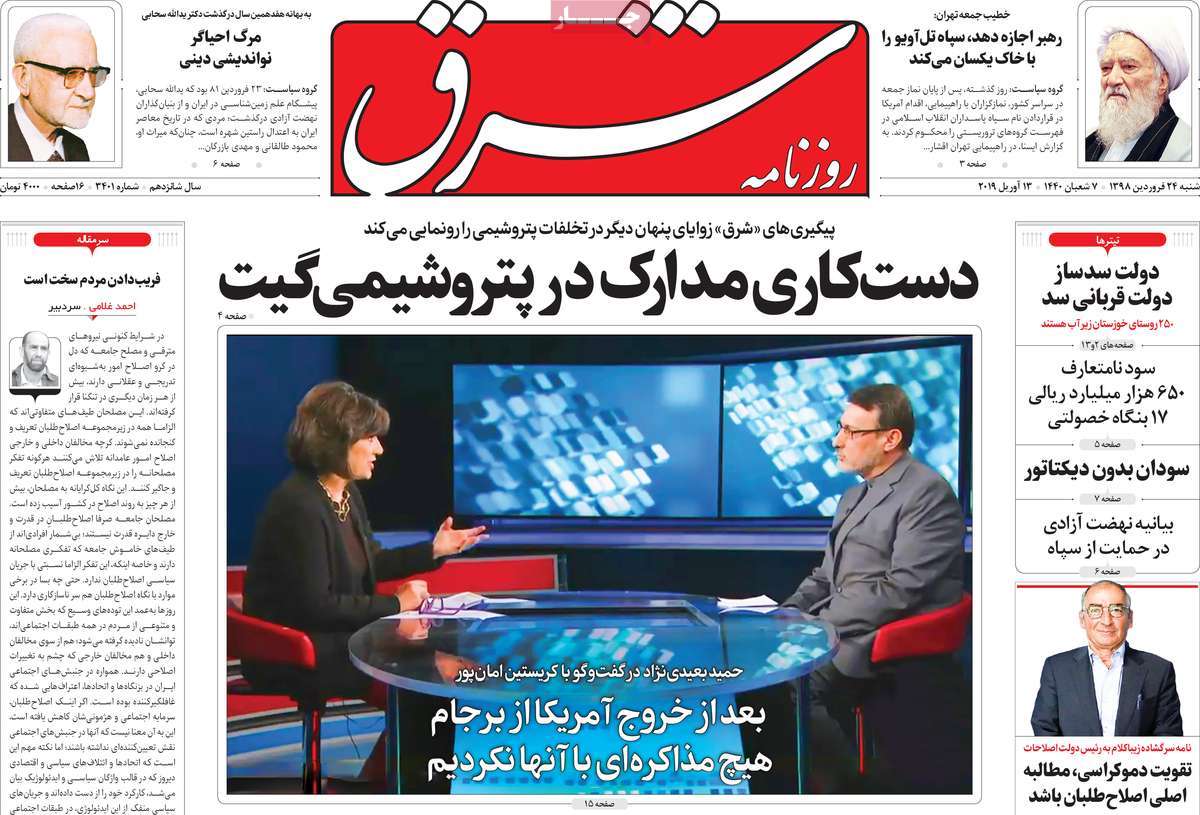