A historic twist and betrayal of nation 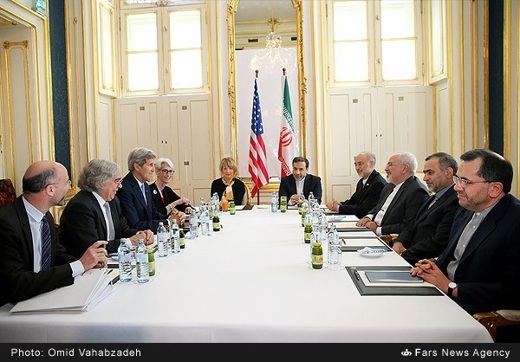 The Kayhan daily has published an opinion piece on nuclear talks, saying some media outlets distort ground realities to influence a generation which have not seen nuclear developments firsthand.

Distortion of ground realities and bending the truth is one of the most effective ways to mislead a society and influence public opinion. This ominous phenomenon will be still more effective when 1) it is about an issue with a historic background and 2) it aims to affect a generation which was not born to see certain events firsthand.

These are the opening sentences of an opinion piece bylined by Hossein Shamsian on Iran’s nuclear talks with P5+1 the Kayhan daily published on June 29. The following is the translation of excerpts of the piece:

Iran is going through a historic stage in its confrontation with its number-one enemy, the US, these days. On a battlefield as vast as the Islamic Revolution, a big, fierce fight is raging over the rights of the Iranian nation. With the warriors of the diplomatic front backed by the nation lining up against the enemy across the negotiating table, some are singing a different tune – instead of showing solidarity – trying to keep society in ignorance by humming the ominous tune, give false clues to the [diplomatic] warriors, and finally prevent the commander from making a decision in keeping with national expediency.

Instead of recalling US crimes and helping people rally around officials, these people are seeking to depict Great Satan, which is a horrible monster, as a kind and mild-mannered angel. The inevitable result would be nothing but disputing the resistance of people on the diplomatic front and negating any resistance to and vigilance against the US, because when you face a kind angel, there is no need to show distrust and defy what she seeks.

What they do is definitely an unforgettable betrayal of the nation and its history. This unfair behavior should not be forgotten under any circumstances. […]

Who are the people who try to distort history and paint a pretty picture of the enemy? […]

First: A group of people are trying to ignore the poor track record of the enemy. This group – that may have taken the toughest stances against the US in the past – talks about anything these days but the US animosity toward a nation which seeks nothing but its independence.

When they raise [people’s] pocketbook issues, insufficiency of credit for the country’s infrastructure or the pain the sanctions have inflicted on people, they never say who has imposed the sanctions and created the problems [for the people]. They say sanctions have put the squeeze on people, but they fail to tell people that the US has slapped these unjust sanctions. […]

Second: Another group does not deny US crimes and meddling but plays down the issue and tries – through pretense and negligence – to divide it into two parts: the enemy’s past which they admit was problematic and its present-day situation [about which they say] we are facing a polite and well-mannered rival. […]

The third group identifies the US as a superpower which has the final say on everything in the world. By playing up the economic and military might of the enemy, on the one hand this group strikes fear into the hearts of those have put up resistance, and on the other, leads thinkers and policymakers to wrongfully assume that all roads lead to Rome. “If you want welfare, industrial might, civilization, arts, sports, morality and politeness, you name it, it should be sought in relations with and submission to the US,” they suggest.

They make such suggestions, but fail to answer the following questions: If the US is the utopia they are suggesting it is, why is it that they keep silent about the 99 percent movement and the million-man marches the poor hold in protest at the conduct of the one percent?  Why is it that the countries which are totally dependent and devoted [to the US] have teetered on the brink of explosion thanks to economic and social inequalities and hardships? What is the reason behind daily protest rallies and massive strikes in European countries and other allies of the US? On which front is Iran – that is deprived of US favors – lagging behind its neighbors that are blessed with the favors the US bestows on its regional stooges?

They fail to answer these questions because in that case events would not unfold according to the [pre-planned] scenario. They fail to admit that Iran is the world’s 17th country in terms of science and 20th in terms of economy and lots of other proud achievements (according to international statistics) thanks to the fact that the country has severed ties with Great Satan. This has placed Iran in a position which seems to be an unattainable dream for many US friends and allies.

Who are those people and what objectives are they pursuing? Part of this mission is accomplished by the media outlets which are fed directly and indirectly by the enemies of the Islamic Revolution. Acting against the professional mission of news media which calls for telling the truth and reflecting the realities, such media dictate their own “dreams and illusions” as “news items” in a bid to make the steps of their savior [the US] sound euphonious. […]

In addition to these media outlets, a number of politicians too are busy painting a nice picture of the enemy in the midst of the historic battle [between Iran and the US]. […] This group – whose members are from political has-beens – poses no threat other than the headache they cause by what they publish every day in “chain” newspapers [a reference to reformist-leading dailies]. They also mislead the enemy by feeding misinformation and sending the wrong signal about their weight and credibility.

What is the real intention of these “makeup people” who paint the face of the US? What do they pursue at this historic crossroads? […] They pursue three objectives. First they try to make the negotiating team feel intimidated by the US, inevitably forcing them into submission to the enemy’s acquisitiveness by inflating the power of the rival and the threat of an imaginary war.

Second, they try to depict the US as a trustworthy country which wishes good for people. This would help impose a distorted and one-sided text on the Iranian nuclear team instead of helping prepare a firm deal which will be subject to no interpretation.

Third, they point to the US as the country which would bring economic relief [for Iran] and instill a misconception into the Iranian team that they need to give in to unjust and inhumane US demands if they seek to do something for the welfare and comfort of the Iranians.

Remarks by the Supreme Leader in his recent meetings, especially the meeting on April 9 or the one with government officials, have clearly and astutely set the establishment’s nuclear red lines, suggesting that nobody is allowed to overstep them and that these wrong and deceptive signals can do nothing to influence the historic decision of the Iranian people, one way or another. What the Supreme Leader has said is a unique yardstick to identify the enemy’s supporters in trying times and tell the [nation’s] traitors and servants apart.