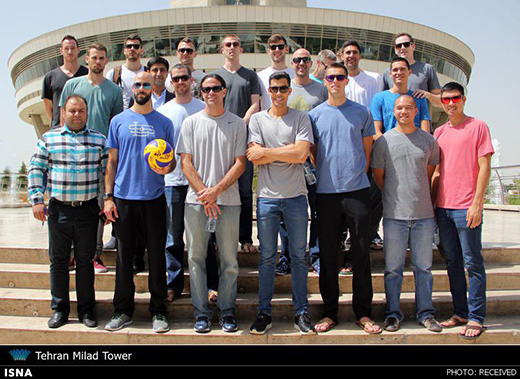 Team USA has had a bird’s eye view of Tehran atop the capital’s Milad Tower, describing Tehran as attractive for foreign visitors.

The US national volleyball team visited different parts of Tehran’s Milad Power on Wednesday (June 17), describing it as one of the key tourist attractions of the Iranian capital which can draw many foreign travelers.

The Iranian Students’ News Agency (ISNA) published a report on June 18 on the US team’s tour of the Tower two days ahead of its first game in the second round of the FIVB Volleyball World League against Iran on Friday night at Tehran’s Azadi Arena. The following is the translation of what members of the US team had to say about the tower and their upcoming match against Iran:

CEO of USA Volleyball Federation Doug Beal said the American people’s knowledge about Iran is limited, adding Iran is home to multiple attractive and must-see places and a large number of tourists travel to Iran to visit its attractions.

As for the Milad Tower tour, he said, “I have visited many towers, including the giant tower in Dubai, but Milad Tower was different, and the US volleyball team found it attractive.”

Beal also said the US team will certainly try to introduce the attractions of the Iranian capital, including Milad Tower, [to the Americans] when it returns home.

He then touched on the game between the US and Iran on Friday and said that we know that a large crowd will turn up to cheer the Iranian side. We hope to play a good game, he added.

Taylor Sander, a member of the US squad, said, “I knew nothing about Milad Tower prior to my trip to Iran. Never could I believe that Iran has the world’s sixth tallest telecoms tower. I’m happy that visiting this attractive tower has been part of the itinerary of our team.”

He further said that he found Milad Tower very attractive. “People in the US are very much interested in towering buildings. Today we could watch Tehran, which is one of the biggest cities in the world, from atop Milad Tower.

Sander also praised the hospitality of the Iranians as yet another attractive part of the trip.

Milad Tower is different for mixing art and architecture

Captain of the US team David Lee, for his part, said Tehran is the city of beauties, adding that Milad Tower is a different tower thanks to the way art and architecture has been mixed in this high-rise, and that it [mix of art and architecture] has added to its attractiveness.

Tehran is one of the cities which has grown rapidly and can turn into a tourist destination for foreign travelers, he said, adding construction of Milad Tower – which is a good example of Tehran’s progress – can create good memories for the tourists.

The US captain then referred to the showdown between his team and Iran and said that the two rival teams are powerful, adding we will definitely see the two teams display a very exciting match on Friday.

At the end of their tour of the massive tower, members of Team USA symbolically signed a volleyball and offered it as a gift to Milad Tower.

[Iran was overpowered by the US in their first and second away matches at 2015 FIVB Volleyball World League with the same 3-1 losses. The Asian champions were also defeated by Poland in their third and fourth matches in the competition, but succeed in earning one point from the European side.

The Iranian squad will line up against the USA on Friday for its first home match. The US has scored 17 points from the first round of the FIVB Volleyball World League is on top of Pool B of the competitions.

A dominant force in Asian volleyball, Iran has become a new powerhouse at the global level, with the FIVB ranking Iran 10th in the latest world standings in September 2014.]