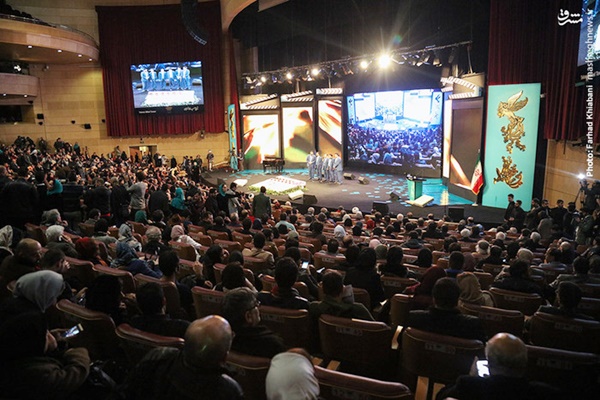 The 35th Fajr Film Festival (FFF) was officially inaugurated at Tehran’s Milad Tower on Saturday with Minister of Culture and Islamic Guidance Reza Salehi-Amiri stating that he believes “in the necessity of an art guild and I am looking to create a basis for the formation of such a system.”

“We are responsible to improve the infrastructure for the (movie) industry,” he said at the top annual cinematic event, which honored four veteran cineastes and awarded the winners of four categories of promotional items, Mehr News Agency reported.

“Iranian cinema today reflects social issues in the community. The number of film productions and ticket sales in recent years show people’s tendency towards the (seventh) art. Movies have a unique role in cultural development.

We have confidence in our filmmakers and believe we can reduce social harm and develop morality and social values with your help,” Salehi-Amiri said, and called the event “the festival of hope and vitality.”

Head of Iran Organization of Cinema Hojatollah Ayoubi pointed to the rise of the young generation of filmmakers.

“This year, half of the movies in the festival are productions of young filmmakers. When I watched the films, I was really amazed. I believe the next fiscal year (starts March 21) is a brilliant year for Iran cinema since we have filmmakers who make movies despite all the constraints and introduce Iranian cinema to the world.”

Addressing the culture minister, he said, “This year, the youth have proved themselves. In this year’s edition, there are unique social films replete with hope. The (young) filmmakers have adopted a sympathetic and in-depth approach to the issues.”

In the Footsteps of Veterans

Ayoubi noted that the young generation of film directors has followed in the footsteps of veterans to keep Iran cinema alive on the global scene.

He praised actress Taraneh Alidoosti, 33, (who plays the lead female role in Iran’s nominee in the best foreign language film category at the Oscars 2017) for her decision not to attend the Academy Awards ceremony next month in a show of support to her countrymen, following the latest visa ban for citizens of seven countries including Iran, issued by US President Donald Trump.

“This is the power of Iran cinema…that an Iranian actress boycotts the Oscars,” Ayoubi said.

Part of the event was dedicated to paying tribute to four veteran cineastes, actor Mohamad Kasebi, 66, producer Gholamreza Mousavi, 65, cinematographer Touraj Mansouri, 62, and screenwriter Farhad Tohidi, 60, who received an honorary Simorgh (the festival statuette of an Iranian legendary bird) and a commendation plaque.

Winners of three categories of the best trailer, best poster and best photo were announced and received their Crystal Simorgh awards and honorary diplomas.