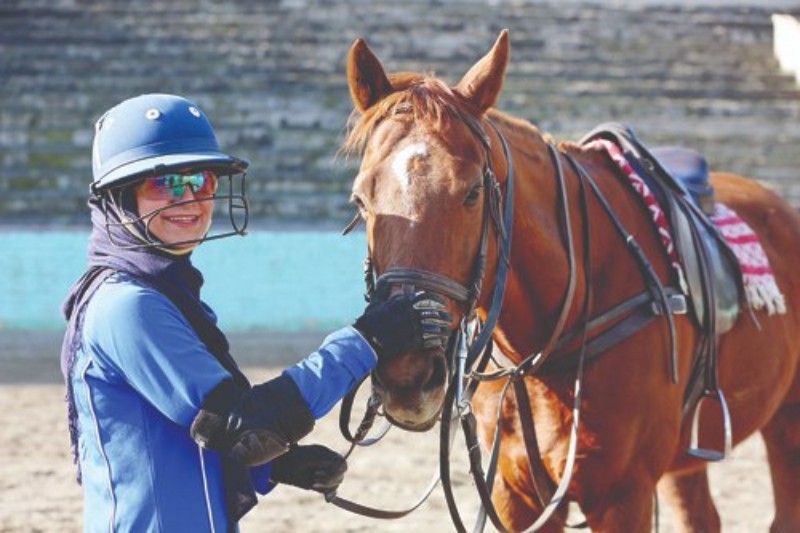 Saeedeh Sadeqi Afjeh is the only and first Iranian female medalist in combat sports done on horseback.

Combat sports done on horseback include sports in which the horse rider should be skillful enough to be able to not only ride horses, but perform combat sports with the bow and arrow, spear and sword.

Sadeqi has been riding horses since childhood, but has been doing this sport professionally for 19 years now. She started sports with swimming at the age of 13. Later on, she tried different sports.

Finally, she chose horseback combat sports as her specialized sport.

She was offered to take up “shooting with air gun” as her sport, but she went to an equestrian club after a while.

“They told me you can win titles in this sport if you are brave. It was then when I began working with the bow and arrow as well,” she says.

She learned how to shoot with the bow and arrow very soon. She was good at horseback riding , too.

So, she soon managed to use both skills together and was able to shoot while on horseback.

In 2007, she took up combat sports on horseback professionally. Saeedeh says in this field, participants hold the bow the way Robin Hood would hold it. The traditional bow and arrow are used in two ways: on horseback and in open fields where shooters would hit targets at distances of 60, 100, 500 and 600 metres. Saeedeh became a member of the national team in this field. The national team included six men and one woman.

That woman was Saeedeh.

Saeedeh says she always longed to compete with an American woman who was very strong, and it happened in South Korea.

“I finished second in those competitions, and that American woman came in third. She would say from the beginning that Iranians are dangerous.

She said Iranians either won’t attend the contest, or if they do they definitely win a title,” she says.

And that is why Saeedeh managed to become world champion in 2011.

“So far, I’ve been the first Iranian woman to have won an international title in this sport,” she says.

2014 Contests in South Korea with Pregnant Horse
However, she failed to win any title in the 2014 South Korea competitions only because her horse was pregnant. Horses are generally given to contenders by the draw. She was unlucky to get that horse.

“Under the law, I was not allowed to beat a pregnant horse in order to make it go faster. Even if there were such a law, I myself wouldn’t have done that,” she says.

“Moreover, a pregnant horse is very careful, so that she wouldn’t hit anywhere. Therefore, she moved very slowly and carefully. That’s why I couldn’t win any titles in those contests,” said Saeedeh.

The International Martial Arts Federation is located in South Korea. Unlike other disciplines in which athletes have to wear special clothes, in this field, participants must wear traditional clothes in international contests in order to present a picture of their historical background and culture to other countries.

In South Korea, countries are required to attend a seminar annually and introduce themselves in ten minutes and explain to the audience about the background of his sport in their countries.

In 2014, it was Iran’s turn to introduce itself, and this responsibility was put on Saeedeh’s shoulders.

She says she is not bad at English. She says she was easily able to prove to everybody that these sports have their roots in Iran.

“It was not a difficult job at all. Looks like everybody knew and admitted that Iran is the cradle of sports such as archery on horseback, spear and sword on horseback, and polo,” she says.

Horse Riding Cure for Depression
She says she loves horses.

“In modern psychology, they use horse riding in many parts of the world to cure depression,” she says.

Horses are very similar to humans.

“There are stubborn horses which won’t change their mind. If they want to give you a hard time, you won’t be able to get a ride on them! Proud, kind or hasty horses jump up and go once you get on them. Like humans, horses feel good one day, and bad another day,” she says.

“Female horses are more cautious and obstinate; male ones are careless and not cautious. They have a community and they would like to live in groups like humans,” she says.

“It is interesting to know that horses communicate with women better. Looks like they can establish emotional bonds with women and understand them more easily,” says Saeedeh.