Should the occupying regime of Israel find itself low on ammunition, it can tap into a stockpile of a billion dollars worth of US weapons arsenal stored in Occupied Territories by the United States for emergencies. So far, the Zionist regime has not requested access to the stockpile during the current assault on Gaza.

The little-known stockpile is officially known as War Reserve Stockpile Ammunition-Israel (WRSA-I) and has been maintained inside Occupied Territories since the 1990s by United States European Command. It is a congressionally approved program that has grown in scope in recent years.

The location of the stockpile as well as the types and quantities of ammunition it stores are classified. However, a Congressional Research Service report from April says “the United States stores missiles, armored vehicles and artillery ammunition” in the stockpile.

A U.S. defense official says “this program consists of U.S. owned and U.S. managed ammunition stockpiles in Israel for use by either U.S. or Israeli forces”. Though the weapons in the stockpile belong to the United States they are essentially for the Zionist regime’s use when they ask for it should they run low on certain stocks of ammunition in emergency situations.

The official said the occupying regime of Israel has not requested to use ammunition stored in this stockpile as it did during the 2006 war with Hezbollah.

The Zionist regime’s access to the American ammunition can be done fairly quickly once there is presidential approval.

“If the president authorizes release to Israel, an “emergency” Foreign Military Sales case is processed by the DoD (Department of Defense) and the ammunition is sold to Israel,” said the official.

Use of the stockpile in case of an emergency “is defined and authorized by the president”, said the official. The transfer of the munitions to Israeli control “can take place in a matter of hours of a presidential authorization”.

The Congressional Research Service Report says “the government of Israel pays for approximately 90% of transportation, storage and maintenance costs associated with the WRSA-I program”.

Iran strongly condemned the killing of Palestinians in the besieged Gaza Strip, urging an immediate end to the Zionist airstrikes and the years-long blockade on the coastal enclave.

“I have made my views clear on other occasions; the President (Hassan Rouhani) has made his views very clear. It is incumbent upon the international community to stop the Israeli aggression against the defenseless people of Gaza, to stop the siege on Gaza, to stop this humanitarian nightmare that has been prevailing in Gaza for the last many years,” Foreign Minister Muhammad Javad Zarif said at a press conference in Vienna.

He added that the UN Security Council and other forces within the international community must put all the pressure that can be brought to stop the siege of a population under “inhuman” conditions and to end Israel’s atrocities.

“That is our position, and we will continue to insist on it,” the Iranian foreign minister said.
He emphasized that every Iranian has his heart go out for the people in the Gaza Strip, particularly for children, women and elderly who are being massacred.

“We support ending Israeli aggression against the people of Gaza and ending the siege which has tried to, in fact, strangulate a whole population,” Zarif pointed out. 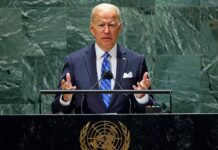 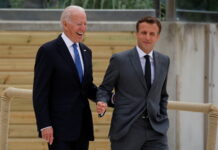 France to return envoy to US after Macron-Biden call