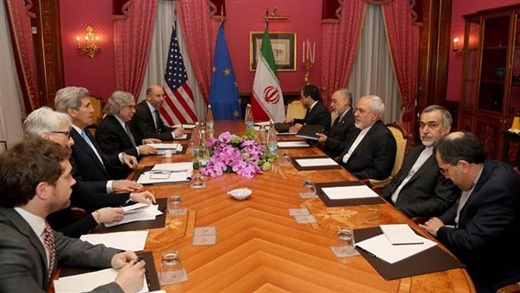 Following his meeting with Kerry, Zarif is scheduled to sit down with his Chinese counterpart Wang Yi in the Swiss city.

Iranian Foreign Minister Mohammad Javad Zarif and US Secretary of State John Kerry have held another meeting as the fifth day of a new round of talks over Tehran’s nuclear program kicks off in Lausanne, Switzerland.

The meeting between the Iranian and US top diplomats is part of broader negotiations between the Islamic Republic and the P5+1 countries aimed at clinching a final deal over Tehran’s nuclear program.

Following his meeting with Kerry, Zarif is also scheduled to sit down with his Chinese counterpart Wang Yi in the Swiss city.

Russian Foreign Minister Sergei Lavrov and British Foreign Secretary Philip Hammond are also expected to join the talks in Lausanne with separate talks scheduled between the two and Zarif on Sunday.

On Saturday, Zarif held separate talks with his German and French counterparts over the outstanding issues between the parties to the negotiations.

He described his talks with Frank-Walter Steinmeier and Laurent Fabius as “very good” and said, “We discussed all the issues that need to be resolved.”

Zarif said, “I think we can in fact make the necessary progress to be able to resolve all the issues and write them down in a text that will become the final agreement. It depends on how long it will take to do that but we are prepared to work diligently in order to move forward and I think that there is every indication that we can in fact move forward.”