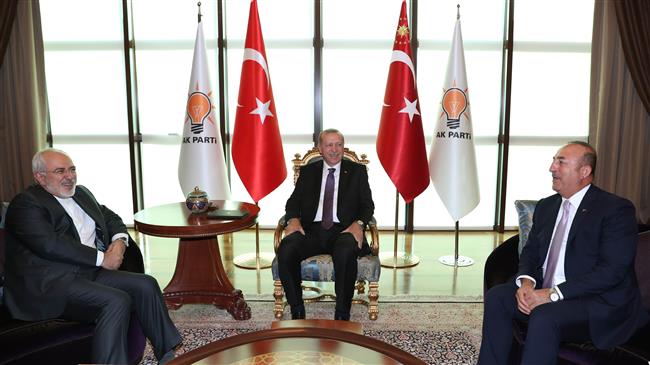 Zarif made the remarks on Wednesday following a surprise visit to Turkey where he met with his counterpart Mevlut Cavusoglu and Turkish President Recep Tayyip Erdogan.

“Our friends in Turkey along with many of Washington’s allies in Europe have reached the conclusion that the US can no longer be depended on as partner,” he said.

He added that the US’ actions show that countries must rethink their further relations, and that Washington’s pressure on regional countries will serve to bring them together.

Following the meeting, Zarif tweeted that the meeting had been successful and had been focused on dealing with Washington’s “behavior”.

“Just finished fruitful consultations with Turkish FM @mevlutcavusoglu, and President @rt_erdogan on bilateral relations and regional cooperation in the face of malign US behavior. Off to #Pakistan tomorrow to meet with new leadership. Our neighbors our priority,” he tweeted.

According to the Anadolu news agency, Cavusoglu said “bilateral ties… (and) Syria” were on the meeting agenda.

Zarif is due to visit Pakistan on Friday to meet the country’s newly-elected Prime Minister Imran Khan.

On Monday, Turkish Finance Minister Berat Albayrak said recent unilateral steps taken by the United States to wage an economic war against Ankara are politically-motivated and could serve to ultimately bolster regional terrorism and the refugee crisis.

Washington and Ankara are entangled in a dispute over an American pastor standing trial in Turkey over terror charges.

Pastor Andrew Brunson has been accused of having links with the outlawed Kurdistan Workers’ Party (PKK) and the Gulen movement, which Turkey blames for the 2016 failed military coup.

Brunson, who has already spent nearly two years behind bars in Turkey, has denied the charges, calling them “shameful and disgusting.” If found guilty, he will face up to 35 years in jail. His imprisonment and then house arrest have caused one of the deepest rows between Turkey and the US.

The US has taken the dispute to the economic front, adopting a series of punitive measures against Turkey, including imposing sanctions on Turkish ministers and doubling of steel and aluminum tariffs, which have led to a sharp decline in Turkey’s currency, the lira.