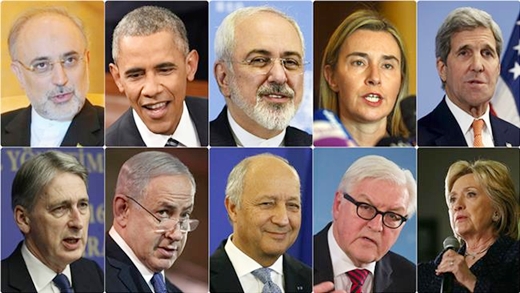 Many world leaders and politicians respond to the implementation of Iran’s historic nuclear deal with world powers.

During a joint press conference held  in Vienna late on Saturday, Iranian Foreign Minister Mohammad Javad Zarif and EU foreign policy chief Federica Mogherini announced that sanctions imposed on Tehran over its nuclear program have been lifted. The announcement was made after the International Atomic Energy Agency (IAEA) confirmed Iran’s commitment to the Joint Comprehensive Plan of Action (JCPOA).

“Today marks the moment that the Iran nuclear agreement transitions from an ambitious set of promises on paper to measurable action in progress,” said US Secretary of State John Kerry after the announcement.

“This achievement demonstrates that international proliferation concerns are best addressed through dialogue and patient diplomacy,” said Ban’s spokesman in a statement. “This is a significant milestone that reflects the good faith effort by all parties to fulfill their agreed commitments,” he added.

In a statement released by the IAEA, the agency’s Director General Yukiyo Amano said that “Relations between Iran and the IAEA now enter a new phase. It is an important day for the international community. I congratulate all those who helped make it a reality.”

Head of the Atomic Energy Organization of Iran (AEOI) Ali Akbar Salehi said that Iran gained its “right” through support from the Iranian nation and Leader of the Islamic Revolution Ayatollah Seyyed Ali Khamenei.

British Foreign Secretary Philip Hammond released a statement saying that “Years of patient and persistent diplomacy, and difficult technical work, have borne fruit as we now implement the deal.”

“At a time when the region is seeing immense challenges and strong tensions, I hope that the spirit of cooperation that marked the conclusion of the deal can also be brought to all the other regional issues,” he said.

He added that the diplomatic victory could lead to success “in defusing other urgent crises and conflicts in the region, especially regarding the civil war in Syria,”

Meanwhile, US President Barack Obama signed an executive order for the removal of sanctions on Iran, the White House announced.

“Iran is still violating UN Security Council resolutions with its ballistic missile program, which should be met with new sanctions designations and firm resolve,” Clinton said.

Iran has always rejected such allegations, arguing that as a committed signatory to the nuclear Non-Proliferation Treaty (NPT) and a member of the IAEA, it has the right to use nuclear technology for peaceful purposes.

Netanyahu added that Israel would “follow the implementation of the deal and warn of any violation.”

Iran and the five permanent members of the UN Security Council – Britain, China, France, Russia and the United States – plus Germany finalized the JCPOA in Vienna, on July 14, 2015.

Under the JCPOA, limits are put on Iran’s nuclear activities in exchange for the removal of sanctions against the Islamic Republic.