World Must Decisively Stand against US’ Unilateralism: Iran 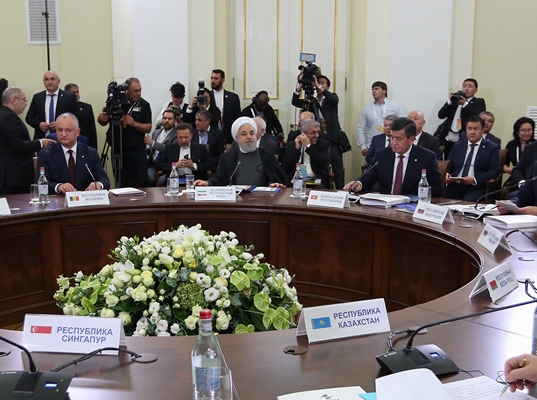 Iranian President Hassan Rouhani has called on the international community, particularly the member states of the Eurasian Economic Union (EAEU), to join hands and stand decisively against the United States’ unilateralism.

Addressing the EAEU Summit on Tuesday in Yerevan, the capital of Armenia, Rouhani welcomed any cooperation with Eurasian states in financial and banking fields, as well as investment through new, effective mechanisms.

He also described the temporary signing of trade agreement between Iran and the Eurasian Economic Union as a sign of Tehran’s inclusive and constructive approach, and invited EAEU investors to take advantage of Iran’s ample potentials and infrastructures for deepening ties.

What follows is the full text of President Rouhani’s statement:

Your Excellency Mr Pashinyan, Honourable Prime Minister of the Republic of Armenia,

I am tremendously happy for the historic opportunity to be able to attend the great summit of Eurasian Economic Union in the beautiful, historical city of Yerevan, at the same time with the preparation of the preliminaries to the implementation of the temporary trade agreement between the Islamic Republic of Iran and the Union. I deem it necessary to thank Mr Pashinyan, the Honourable Prime Minister of Armenia, warmly for hosting this important summit and his warm hospitality.

The Summit Meeting of the Eurasian Economic Union is a unique opportunity for exchanging views and finding solutions for some of the most important regional and international issues and I hope our meeting today would produce fruitful and valuable outcome.

The global system has been founded on multilateralism and joint efforts of all the members of the International Community and therefore all the countries of the world are duty bound and responsible to combat with unilateralism in order to help safeguard international peace, security, stability and order.

The resistance of such countries as the Islamic Republic of Iran against the hostile and unilateral measures of the United States has resulted in inhuman and severe sanctions. The United States in recent years has employed and applied a unilateral approach and ignored its obligations and violated international agreements and bilateral treaties with many other countries such as China and Russia and has targeted even some of its allies. In our belief, the international community should stand against the US hostile and unilateral approach by taking serious decisions and effective measures. The US coercive measures and the use of dollar as weapon constitute an act of economic terrorism that target the life and living of ordinary people.

The implementation of the nuclear deal or the JCPOA as an effective pattern of successful multilateral diplomacy for the settlement of international issues requires the full compliance of all the signatories to the deal and all the UN Member States have been obligated to comply with and support the implementation of its provisions.

The Islamic Republic of Iran expects the signatories to the JCPOA to act in compliance with the deal. Under the present sensitive circumstances, not only the JCPOA participants but all the other UN Member States should make all the necessary efforts to support and safeguard this multilateral achievement in order to strengthen regional and international cooperation, security and stability.

Unfortunately, as the result of the US destructive measures, today we are facing many problems at the world stage in the economic and commercial relations among countries as well as increasing poverty, insecurity, migration and reducing economic growth. And the continuation of such escalatory atmosphere will result in damages which cannot be compensated.   Under such conditions of fear and disappointment in international system, we require regional and multilateral cooperation parallel to multilateralism at the global level. Therefore, the Islamic Republic of Iran firmly supports any collective and regional cooperation within the framework of economic, commercial and political unions such as the Eurasian Economic Union, the Economic Cooperation Organization, the Shanghai Cooperation Organization and the Asian Cooperation Dialogue as the main important tools in regional economic and political integration.

The policy of the Islamic Republic of Iran is based on maintaining peace and stability in the region and the Persian Gulf as well as freedom and security of navigation and shipping in the Strait of Hormuz. Recent incidents have seriously jeopardized such security. Peace and security in the Persian Gulf, the Sea of Oman and the Strait of Hormuz shall be guaranteed with the participation of all the countries of this region. And as I reiterated in this year’s General Assembly of the United Nations, we invite all the countries affected by the developments in the Persian Gulf and the Strait of Hormuz to the Hormuz Peace Endeavour or the HOPE Coalition. This coalition aims to enhance peace, stability, progress and welfare for all the residents of the Strait of Hormuz. It will also lead to mutual understanding and peaceful and friendly relations among them. This initiative encompasses various avenues of cooperation such as the collective supply of energy, freedom of navigation and free movement of oil and other resources from and to the Strait of Hormuz and beyond.

The Islamic Republic of Iran is determined to diversify its economic and trade relations and rely on economy of resilience and more active regional and international cooperation.

The trade agreement between the Islamic Republic of Iran and the Eurasian Economic Union signifies the comprehensive and constructive approach of Iran in harmony with a strong political determination to contribute to the development of multilateral and regional economic and commercial relations. The implementation of this trade agreement would constitute an important step towards strengthening multilateral trade structures.

Iran’s geographical position has provided the possibility of stronger connectivity between Europe and Asia and many countries in the west, east, north and south. We are interested in exploiting such God-given gift in order to contribute to the sustainable development and progress of our country as well as the economic integration of the countries of the region in the best possible manner. In this respect, various rail and road corridors have been designed and constructed with huge investments in order to facilitate transit and transport. Such corridors include the North-South corridor, the Persian Gulf-Black Sea corridor, the Ashgabat Agreement corridor, the ECO rail and road corridor and many airway and aviation corridors. The ports of the Islamic Republic of Iran in the Caspian Sea, the Persian Gulf and the Indian Ocean Rim especially Chabahar Port as well as Iran’s safe rail, road and air networks have created the possibility of stronger connectivity with the neighbouring countries and other continents.

The Eurasian Economic Union is able to realize all its capacity and move towards strategic transit and transport integration and convergence. Therefore, I would like to propose that the member countries of this union devise a strategy for the facilitation of transit in Eurasia in order to simplify and cut transit and transport procedures and regulations as well as to facilitate the traffic of transit and transport operators and passengers and trucks inside Eurasia through designing and developing smart solutions and minimizing obstacles on the way of more facilitated transactions.

The Islamic Republic of Iran has already set up extensive facilities and infrastructure in free trade, industrial and special economic zones particularly in the south and north of the country including the Chabahar Free Zone, Amirabad Free Zone in Mazandaran, Anzali Free Zone in Gilan and Aras Free Zone in East Azerbaijan. We stand ready to provide valuable facilities and more infrastructure for the expansion of our trade relations with the Eurasian Economic Union. Therefore, I would like to take this opportunity to invite the Eurasian Economic Union investors to enjoy and benefit from such facilities and capabilities to enhance mutual relations.

The Islamic Republic of Iran has adopted one of the most comprehensive laws to encourage and support foreign investment, and stands ready to warmly receive and host investors and entrepreneurs of the Eurasian Economic Union and hold investment opportunities forums in the near future. In this respect, we welcome any cooperation with the member states of the Eurasian Economic Forum in financial and banking sectors and investment especially through new and effective mechanisms. I would like to propose that a special ad hoc group is established comprising of the representatives of the Union members and the Islamic Republic of Iran in order to operationalize ideas and initiatives for joint venture and investment in Eurasia.

I hope that the Islamic Republic of Iran would benefit from the contribution and cooperation of friend countries of the Russian Federation, Armenia, Kazakhstan, Kyrgyzstan and Belarus in overcoming the present obstacles and witness the further enhancement of economic and trade relations in addition to good political ties. Here, once again, I stretch the hand of assistance and cooperation to you and I believe that in cooperation with each other, we would be able to introduce to other parts of the world as an effective model the economic relations of our region within the framework of the Eurasian Economic Union.

In conclusion, once again I should like to thank all the high-ranking officials and organizers of this summit. I hope the presence of the heads of state and government in this meeting would pave the way for the Eurasian Economic Union to play a stronger role and enjoy a higher status in the region and the international system.

I thank you for your attention