Without Iran’s Support, Baghdad Would Have Collapsed: Iraqi General 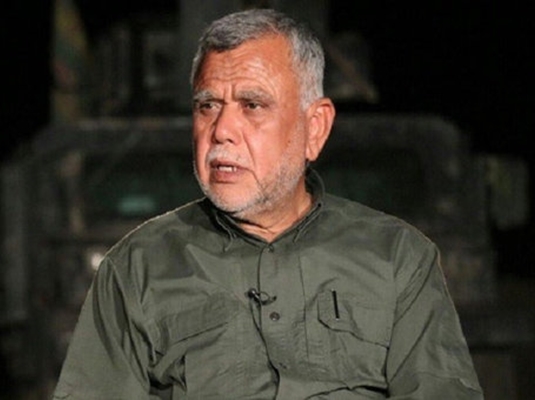 Secretary General of Iraq’s Badr Organization Hadi Al-Amiri has praised Iran for supporting Iraq in its fight against terrorism, saying without Iran’s contribution, the central government of Baghdad would have fallen apart.

“Iranians stood by us as military advisors within a mechanism agreed with Iraqi Prime Minister Haidar Al-Abadi. Today we have a comprehensive security establishment equipped with the required factors to achieve victories,” Al-Amiri said.

In an interview with Alforat TV Channel on Wednesday, Al-Amiri touched on the US Congress’ decision to put the names of some members of Iraq’s Popular Mobilization Units in its list of terrorists and said “we don’t care about the issue because what we are doing is just to defend the dignity of our country.”

He went on to say the Congress’ decision was made with the aim of protecting Israel’s interests in the region.

“The US Congressmen have closed their eyes to what is going on in Iraq. We call on the US military forces as well as its military advisors to leave our country as soon as possible,” he said, as quoted in a Farsi report by Tasnim.

He stressed fight against ISIS had been focused mainly on eradicating the Takfiri group. “We entered the war following a Fatwa (religious decree) by Iraq’s top Shiite cleric Seyyed Ali Sistani. If it had not been for the Fatwa and the following rise of the Iraqi nation, the Iraqi forces would not have the fighting spirit to counter the ISIS threats. The victory was achieved thanks to the Fatwa and the Iraqi public’s uprising.”

The Iraqi politician called the victory of PMU a victory for all Iraq, saying the popular forces will remain united based on the top cleric’s Fatwa.

The secretary general of Badr Organization also said the PMUs are not allowed to fight against the enemies outside Iraq. “Our presence in such wars depends on the agreement of the chief-commander of armed forces.”

He also referred to the fall of the ISIS in Iraq and said the end of military operations against the terrorists does not mean that the group no longer exists because there are still some inactive terror cells in Iraq that should be eliminated.

“Our mission after military action is to engage in intelligence activities to find the elements of ISIS and eliminate them wherever they are,” he added.

Al-Amiri stressed the Iraqi intelligence forces including PMUs are not legally allowed to take part in the elections. “The PMUs commanders can enter elections but only after resigning from their military posts otherwise they can only vote.”

Elsewhere in the interview, the Iraqi politician referred to the latest verdict of the Iraqi Federal Court to declare illegal the results of the recent secession referendum in the Kurdistan Region and said the ruling of the court is a good opportunity for beginning of talks between the central government in Baghdad and the Kurdistan Regional government but the KRG views the verdict negatively.

Al-Amiri also said the central government in Baghdad has not yet taken control of the border areas. “This has already hampered talks between Baghdad and the KRG because some of the main border crossings are still under the control of KRG and Baghdad is angry with it.”