Why Iran Needs Ballistic Missiles: A Missile for a Missile 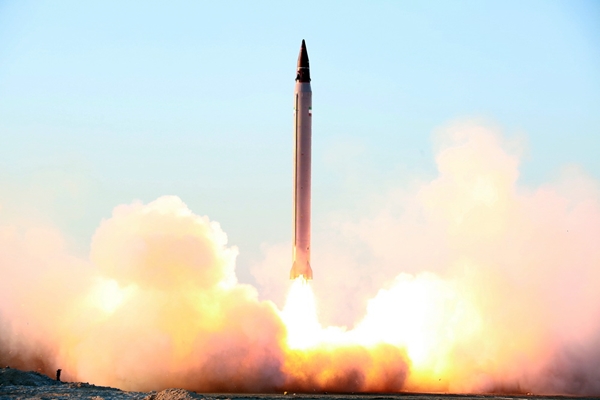 During the eight-year war imposed on Iran by the currently-overthrown Iraqi dictator Saddam Hussein, cities and residential areas, hospitals and schools across Iran, including in the capital city of Tehran, were hit by enemy missiles.

In those years, a bitter slogan came to life, and remains in people’s minds: “The response to a missile is a missile.” This slogan was what the people of Iran demanded from Iranian statesmen and military commanders during the eight-year conflict.

Iranian people, in rallies attended by thousands and even millions, shouted “A missile for a missile,” but their demands were not met, since Iran did not have missiles. The world, however, just watched.

At the very end of 2014, US President Barack Obama highlighted this bitter truth in an interview with National Public Radio (NPR). In those days, the deal between Iran and world powers over Tehran’s nuclear energy program had not yet been signed. Obama said, “Iran suffered from a terrible war with Iraq, in which millions of their countrymen were lost. They have legitimate defense concerns.”

Kobra Asupar, in her article in Javan newspaper, revives the expression “A missile for a missile”. The article is a review of a small part of Iran’s contemporary history, and reminds Iranians of a difficult time.

Here is the full text of the article, which urges the international community to deal with Iran’s missile program in the same way as that of the US or Israel.

Having settled the issue of alleged concerns over Iran’s nuclear program, the US and its Arab allies are now worried about Iran’s missile program. As could be predicted, the US is preparing the grounds for a new JCPOA [Joint Comprehensive Plan of Action – the text of the nuclear deal finalized by Tehran and the six world powers back in July 2015]. Using media propaganda and psychological warfare, the US presented its own (and its allies’) problem with Iran’s nuclear technology as an international issue, and now that it has managed to resolve this, it is jubilantly proceeding to address the next issues. This time, it is Iran’s missile program!

Back on April 7, US Secretary of State John Kerry referred to Iran’s ballistic missile activity, and said, “We say very clearly to Iran that we’re prepared to work a new arrangement to find a peaceful solution to these issues… We look for Iran to make it clear to everybody that they are prepared to cease these kinds of activities that raise questions about credibility and questions about intention.”

It seems quite ridiculous if you think about it carefully; the world’s largest manufacturer and exporter of military equipment and weapons, and the country that enjoys the world’s most advanced missile systems is concerned by Iran’s missile program! Even more ridiculously, it expects Iran to acknowledge and understand its irrational concern, and even to voice its preparedness to resolve the problem. It is laughable that the US Secretary of State wants the intentions and objectives behind Iran’s missile program to be clarified! For what purpose is a missile used? Isn’t it clear? Of course, the US uses them aggressively, while Iran wants them for self-defence. The Americans are unaware of this; however, as mentioned, the US is seeking to internationalize its own personal problems, and those of its Arab allies, over Iran’s missile program.

The US is worried about Iran’s missile system; it has the right to be worried, because the missile system prevents Washington from realizing its objectives regarding Iran. An Iran with ballistic missiles is dramatically different from an Iran without them. With ballistic missiles, Iran would never be treated in the same way as Yemen, Iraq, and Afghanistan. Therefore, the US would have to forget about the military option which it once had on the table.

Progress and capability are terms which discourage Americans from using aggressive rhetoric against Iran. Right at the time when the nuclear deal was being celebrated in Iran, the United Nations Security Council, thanks to the ever-present concerns of a polite and smart United States, approved a resolution that imposed restrictions on Iran’s testing of ballistic missiles. This way, the JCPOA could not derail the path of the USA’s permanent hostility towards the Islamic Republic. In those days, President Hassan Rouhani’s administration did not take the resolution seriously enough, and even tried to downplay it, but as time passed, it came to be seen that the concerns over the resolution were not undue. This time, sanctions may be imposed on the country on the pretext of its missile program. The US is likely to highlight any unethical behavior, and this is what destroys the building of trust.

Nevertheless, we should not let anyone treat Iran in an especially different way. We do not have any problem; it was the West’s behaviour that taught the world, Iran in particular, that as long as aggression and hegemony dominates the world, it is not possible to establish security without homegrown military advances, particularly missiles, or else your country would be invaded militarily.

For eight years, the Iranian people paid a heavy price, both physically and financially, for such global ferocity during the 1980s war imposed by Iraq. Now, we have the current conditions in Palestine, Afghanistan, Iraq, Syria, Yemen, and the like in front of us. Whatever solution the ever-concerned “global” community has found and implemented for American or Israeli missiles should be used for Iranian missiles as well. If their missile systems are dismantled, those in Iran should be treated in the same way. If they abandon their missiles, Iran would do the same, but their missile systems are upgraded on a daily basis; no one is there to stop them. They are encouraged and supported, and they are constantly making rhetorical military threats against Iran. Under such circumstances, it would be better for them to keep quiet on the Islamic Republic of Iran’s defense system. A missile for a missile, and negotiation for negotiation!

Once Washington and Tel Aviv dismantle their missiles, Iran would do the same. But until that time, they had better avoid talking about Iran’s defences.