Violation of Nuclear Deal to Cost US Dearly: Iran 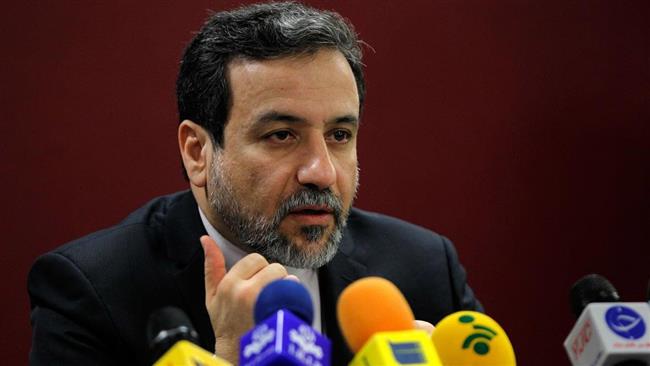 A top Iranian diplomat has warned the US against the 'serious price' of breaching the nuclear deal between Tehran and world powers, saying the Islamic Republic is prepared to respond to any violation.

Addressing a Friday meeting of Japan’s Sasakawa Peace Foundation, Iranian Deputy Foreign Minister for Legal and International Affairs Abbas Araqchi said if any party to the deal, called the Joint Comprehensive Plan of Action (JCPOA), violates its terms, they will have to pay a “serious cost.”

Araqchi denounced the new US sanctions against Iran over its missile program as “unacceptable” and argued that Tehran’s missile program, which relies on Iranian people’s capabilities, is solely defensive and deterrent.

Iran and the five permanent members of the UN Security Council – the United States, Britain, France, Russia and China – plus Germany reached the JCPOA on July 14, 2015 and began implementing it in January 2016.

However, the US Senate and Treasury Department have imposed new sanctions against the Islamic Republic and several Iranian companies and individuals in recent months over its national missile program, which is not in breach of the JCPOA.

Araqchi’s comments come as the Iranian parliament (Majlis) is set to vote on a motion which incorporates a host of retaliatory measures in the face of US “acts of terror” and “adventurism” in the region.

The bill, which was passed by the Majlis’ Committee on National Security and Foreign Policy on Wednesday, will be put on the parliament’s agenda next Sunday, said Hossein Naqavi Hosseini, the committee’s spokesman, in a Thursday interview with the IRIB.

It “takes into consideration the aspects of US hostile measures in the region and their behavior in different areas, [including] acts of terrorism and human rights violations, will be put under close monitoring,” he added.

The bill allocates some $609 million to several state bodies, including the Foreign Ministry, Ministry of Finance and Economic Affairs, the Judiciary, the Islamic Revolution Guards Corps (IRGC) and its Quds Force, to monitor and probe US actions in the region, the lawmaker said.

Iranian lawmakers had passed the single-urgency motion with 93 percent of the votes, referring it to the National Security and Foreign Policy Committee for further consultation with different state organizations and legislative bodies, Naqavi Hosseini said.

The motion comes in response to the US violations of the Joint Comprehensive Plan of Action (JCPOA) on Iran’s nuclear energy program and Washington’s new sanctions against Tehran’s missile activities, the latest round of which was adopted last month.

‘Iran’s source of power is its people’

Elsewhere in his remarks in Japan, Araqchi elaborated on Iran’s role in the Middle East, describing the Islamic Republic as the most stable and secure country in the tense region.

Iran, contrary to many other countries, gains power from its people, Araqchi said.

He went on to enumerate the key challenges facing the Middle East, including poverty and economic disparity, undemocratic regimes, extremism and terrorism as well as the Israeli occupation of Palestinian territories.

Araqchi described Takfiri terrorism as the main challenge in the Middle East, which jeopardizes the entire global community and called for a collective campaign by all countries to eradicate the phenomenon.