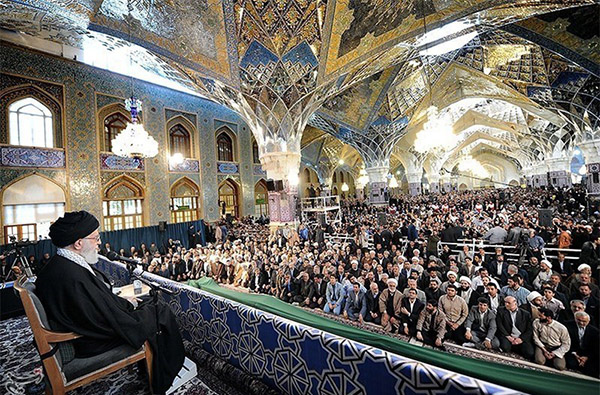 Leader of the Islamic Revolution Ayatollah Seyyed Ali Khamenei says the US seeks to restore over Iran the hegemony and influence that Washington exerted during the reign of the regime that was toppled by the 1979 Iranian Revolution.

“They (the Americans) are moving in this direction in a bid to be able to reinstate their previous hegemony,” Ayatollah Khamenei told a large crowd of pilgrims in the holy city of Mashhad on the first day of Persian New Year on Sunday.

The Leader said Iran’s 1979 Islamic Revolution liberated the nation of Washington’s deep-rooted grip, adding that Iranians proved that it is possible to stand up to the US. He said the revolution handed the country back to the nation, its true owners.

Before the revolution, Ayatollah Khamenei said, that US used to plunder Iran’s riches and the ousted Pahlavi regime was the main base of the UK and the US in the region.

The Leader reiterated that the Iranian nation has no issues with the American people but the US administration is the enemy of Iran.

‘US not honoring JCPOA’

Pointing to Iran’s nuclear agreement with the P5+1 group of countries, known as the Joint Comprehensive Plan of Action (JCPOA), Ayatollah Khamenei said the other side, under various pretexts and through deception, is not fully implementing its side of the deal such as removing all obstacles to Iran’s banking transactions or unfreezing the country’s assets abroad.

“In the agreement we reached with the Americans on the nuclear issue, the Americans did not deliver on their pledges… Today, all cross Western countries and those who are under their impact, our banking restrictions are still facing problem and repatriation of our assets are facing problem,” said Ayatollah Khamenei, adding that “they fear the Americans.”

Elsewhere, Ayatollah Khamenei said there is no guarantee that President Barack Obama’s successor would “fulfill these minimum obligations.”

“The US presidential candidates are vying with each other in inveighing against Iran…These are [proof of] enmity,” said the Leader.

Ayatollah Khamenei said the Secretary of the Treasury Jack Lew is making ceaseless efforts in order to prevent Iran from benefiting from the JCPOA results.

Regarding his choice of an economic motto for the New Year, namely “Resistance Economy; Plan and Action,” the Leader said that the West seeks to imply that Iranians have only one of two choices, namely either to come to terms with the US or suffer economic hardships.

The Leader said the West seeks to instill and propagate the notion that Iranians must either bow to the demands of the US or suffer the consequences. Ayatollah Khamenei warned that submission to the wishes of the US is tantamount to backing down from one’s stances and a loss of independence.

Ayatollah Khamenei said the West would like the Iranians to back down from its demands such as on the issue of Palestine and turn into what the US would like it to be and like some regional states be reconciled with “the Zionist enemy.”

The Leader said the enemy, if not resisted, will gradually expand its demands to the point where it will question the very founding principles of the Islamic Republic and seek to change its essence and substance.

Ayatollah Khamenei called for an increase in the productivity level in Iran, particularly in the energy sector, adding this can save billions of dollars.