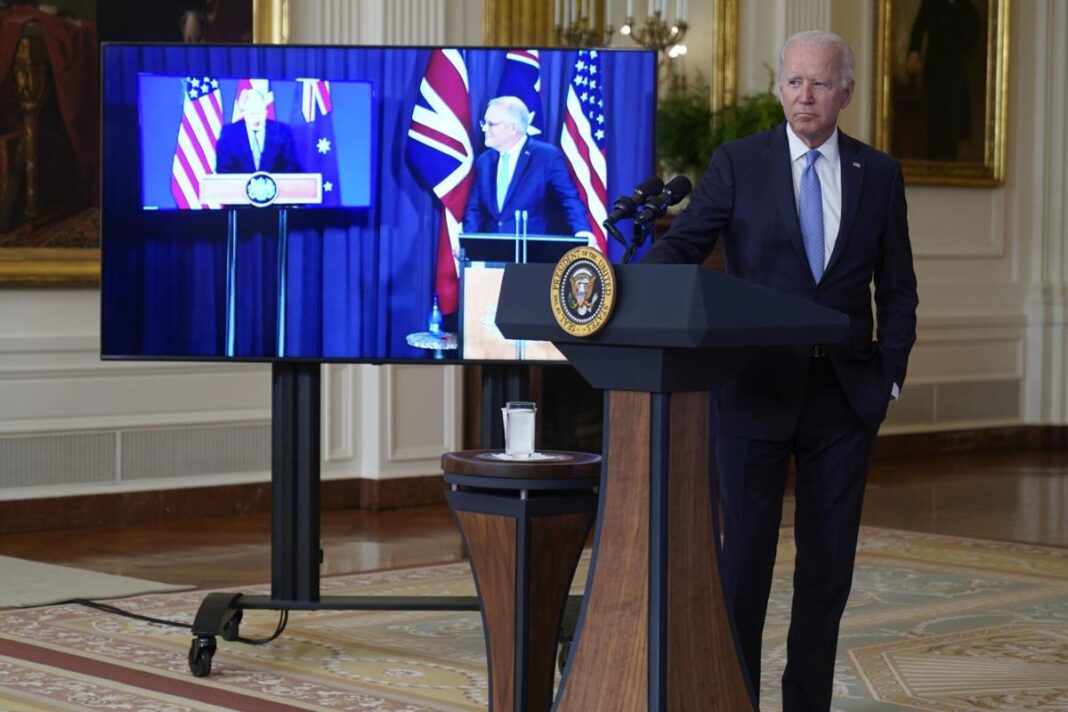 The US, UK and Australia are setting up a trilateral security partnership aimed at confronting China, which will include helping Australia to build nuclear-powered submarines.

President Joe Biden just announced a new working group with Britain and Australia to share advanced technologies — including the acquisition of nuclear-powered submarines — in a thinly veiled bid to counter China.

The trio, now known by the acronym AUKUS, will make it easier for the three countries to share information and know-how in key technological areas like artificial intelligence, cyber, quantum, underwater systems, and long-range strike capabilities.

“This is about investing in our greatest source of strength, our alliances and updating them to better meet the threats of today and tomorrow,” Biden said from the White House in between two monitors showing the other world leaders.

“AUKUS — it sounds strange, all these acronyms, but it’s a good one,” he added.

Morrison stated “we must now take our partnership to a new level”, while Johnson added, “We’re adding a new chapter in our friendship.”

All three countries will work over the next 18 months to figure out how best to deliver the technology, which the U.S. traditionally has only shared with the U.K., the official announced. U.S. officials and experts noted that Australia currently doesn’t have the requisite fissile material to run a nuclear-powered submarine, meaning the next year and a half of negotiations will likely feature nuclear-material transfer discussions.

Washington and Canberra signed a gold-standard “123 agreement” in 2010 in which Australia promised not to enrich or reprocess nuclear material sent to it by the U.S.

Australia doesn’t seek a nuclear weapon, Morrison and Biden emphasized. Still, a senior U.S. administration official previewing the remarks Wednesday morning said of the nuclear-powered submarines that “this technology is extremely sensitive. This is frankly an exception to our policy in many respects. I do not anticipate that this will be undertaken in other circumstances going forward”.

There’s nothing explicitly about China in the three-way deal, but two U.S. officials noted that the subtext of the announcement is that this is another move by Western allies to push back on China’s rise in the military and technology arenas.

“This is a surprising and extremely welcome sign of the Biden administration’s willingness to empower close allies like Australia through the provision of highly advanced defence technology assistance — something that Washington has rarely been willing to do,” said Ashley Townshend, director of foreign policy and defense programming at the United States Center in Sydney.

“It suggests a new and more strategic approach to working collectively with allies on Indo-Pacific defence priorities,” Townshend added.

Canberra will abandon a $90 billion submarine deal with France and will instead acquire American-made nuclear-powered submarines, with help from the U.K. The French deal had long been in trouble, with the Naval Group, the French shipbuilder tasked with constructing the 12 submarines, and the Australian government sparring over design changes and cost increases over the past several years.

Neither Naval Group nor the French government has commented on the change in direction.

A new class of nuclear-powered submarines would give Washington and its allies in the Pacific a powerful new tool to attempt to contain Chinese military expansion, and would follow on the current deployment of a British aircraft carrier to the region, and recent transits by French and German warships to the South China Sea.

The U.S. and U.K. have long partnered on their nuclear-powered submarine programs, sharing technology across their various classes of ships. Bringing Australia into the fold would be a major step in increasing the ability of the three countries to operate together undersea across the Pacific, as well as adding a powerful allied punch in the region that is currently lacking.

Another U.S. official said that any sale of submarines to Australia would take several years. But in the interim, there will be a push for more American nuclear submarines to make port calls in Australia to show presence. Late last year, the U.S. wrapped up an agreement with Norway to expand and upgrade a port in the Arctic to allow American nuclear-powered submarines to dock and resupply, a major move for expanded operations in the High North where the powerful Russian Northern Fleet holds sway.

Pentagon officials have already started working with Congress to try and smooth the path for more industrial cooperation with Australia and the U.K., a process that could take some time as U.S.-based defense companies and members of Congress will likely tread carefully about sharing technology, and potentially offshoring some jobs.

“We’re working with Congress to make sure that we have that authority to invest in Australia and the U.K.,” Jesse Salazar, the Pentagon’s deputy assistant secretary for industrial policy, stated at an event at George Mason University on Wednesday.

Beijing has a growing missile arsenal at its disposal and its forces are increasingly aggressive, sailing naval ships near Japanese and American waters in recent days. It’s part of China’s effort to assert its primacy in the Indo-Pacific and lay claim to disputed territories. Chinese officials say territory that falls within the country’s “nine-dash line” in the South China Sea belongs to Beijing.

In response, the U.S. continues to build partnerships with other nations that serve as a bulwark against China. One such group is known as “the Quad”, comprised of the U.S., Japan, Australia, and India. Formed in its current iteration in 2017, the four-nation grouping is cautious about explicitly saying that its economic, technological, and military cooperation is about thwarting Beijing’s aims, but analysts say the Quad wouldn’t be as robust today if it weren’t for China’s continued aggressions.

On Sept. 24, all four Quad-nation heads will meet at the White House for the first-ever in-person, leader-level gathering of the group.

Japan has long been wary of Chinese intentions and provocations in the East China Sea, but Australia and India have seen more recent flashpoints.

A trade war between China and Australia has worsened relations between the countries. The dispute, which began in April 2020 after Prime Minister Scott Morrison asked for an inquiry into the origins of Covid-19, has cost the two nations roughly $4 billion. Josh Frydenberg, Australia’s treasurer, this month accused Beijing of trying to exert “political pressure” with penalties on Australian products.

And China-India relations have also been tense, with recent fatal standoffs at their long-disputed border high in the Himalayas.