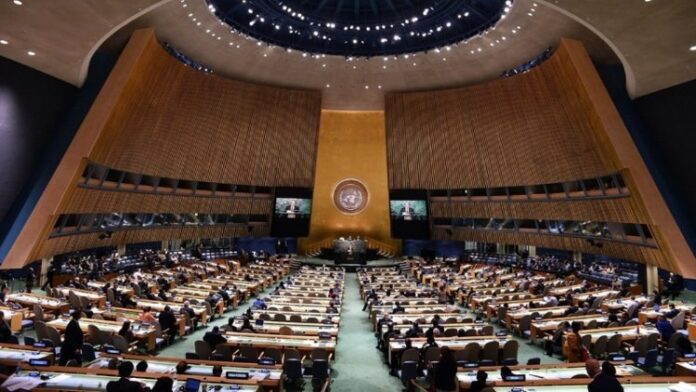 Iran says the American leaders and authorities together with a host of criminals called the B-Team are seeking to hijack the UN forum in order to attack and accuse independent countries, including the Islamic Republic.

The remarks were made by Iran’s Foreign Ministry spokesman Seyyed Abbas Mousavi in a piece published by the Iran newspaper on Monday.

“However, despite all subversive acts adopted and restrictions imposed by the US government to prevent foreign delegations, particularly Iran’s team, from entering the UN headquarters in New York, the presence of the Iranian president and foreign minister as well as their entourage at the General Assembly meeting plus the other programs held on the sidelines of the event turned into a major opportunity to display Iran’s dignity and might,” he added.

What follows is the full text of his piece entitled “Diplomacy of Honour and Power in Shaddad’s Paradise”:

The 74th meeting of the UN General Assembly has started and is underway in the city of New York in the third week of September as usual. New York can be described as the hub of hegemony and modern Shaddad’s Paradise because the United States, especially under President Donald Trump, has turned into a symbol of arrogance and vanity, even in the eyes of his own friends and allies. The US nurses the idea of America’s superiority over everything and everybody and the dominance of an American lifestyle in the world. This is an evil dream which will never come true given the willpower of freedom-seeking nations and the existence of independent political systems and thanks to the justice-oriented ideology and paradigm of pure Islam which Iran is promoting.

Annual and rotating meetings of the UN, especially the annual UN General Assembly meeting attended by heads of state, leaders, presidents and foreign ministers of an overwhelming majority of countries, are an ideal opportunity for independent and freedom-seeking countries to make their voice heard across the globe loud and clear and in the best way possible.

In recent years, especially with the current ruling elite led by Trump coming to power – elite who look more like mafia groups and gangs of New York in the 19th and first half of the 20th century rather than political and responsible rulers – American leaders and authorities together with a host of criminals called the B-Team are seeking to hijack the UN forum in order to attack and accuse independent countries, including the Islamic Republic of Iran. However, despite all subversive acts adopted and restrictions imposed by the US government to prevent foreign delegations, particularly Iran’s team, from entering the UN headquarters in New York, the presence of the Iranian president and foreign minister as well as their entourage at the General Assembly meeting plus the other programs held on the sidelines of the event turned into a major opportunity to display Iran’s dignity and might.

Perhaps this year’s General Assembly meeting was different from that of previous years due to the existing circumstances, the international situation, the complexity of the situation ruling the West Asia region, the escalation of animosity and hostility by the US and crisis-provoking elements of B-Team toward the Islamic Republic of Iran, and the occurrence of major developments on the ground in Yemen, Syria and Lebanon. In the meeting, which was marked by the usual ploy of hegemonic powers to threaten and restrict freedom-seeking and independent nations, the Iranian president and foreign minister were able to speak from a position of dignity, wisdom and expediency with reliance on the support of the Iranian nation and guidelines of Leader of the Islamic Revolution Ayatollah Seyyed Ali Khamenei and by focusing on soft diplomacy along with the hard power of the Establishment which has the upper hand in security-political equations in the region. By the admission of friend and foe alike, this year’s UN General Assembly meeting not only provided a broad arena for the Islamic Republic of Iran’s prudent diplomacy, but also turned into a field for the political isolation, humiliation and reprehension of US leaders.

During his short stay, the respected Iranian president adopted a very active and dynamic diplomacy by taking part in numerous meetings with world leaders and heads of state and foreign ministers from different Western and non-Western countries, attending meetings held on the fringes of the main event, giving exclusive interviews even with the most radical American and international media outlets, and more importantly, and offering plans and initiatives and proposals in order to settle regional crises and the issue of the Iran nuclear deal known as the Joint Comprehensive Plan of Action (JCPOA), which, in turn, was a show of Iran’s dignity.

Incontrovertibly, the apex of Iran’s dignity-oriented diplomacy was manifested in the Iranian president’s speech at the UN General Assembly, a forum where the president used the language of logic and a tranquil tone to highlight human and ethical principles and reiterate the Iranian nation’s abidance by its commitments and the other parties’ non-compliance and breach of promises. Accordingly, he shed light on the path that would offer a solution to the current nonessential crisis, which is the fallout from the United States’ excessive demands and breach of obligations.

More importantly, the presentation of an idea called “The Coalition of Hope Plan; The Hormuz Peace Endeavour” along with other plans and initiatives, including the initiative of forming a forum for regional dialogue and the idea of concluding a non-aggression treaty with neighbouring countries, bear witness to the peace-loving nature of the great Iranian nation.

The most significant part of the president’s speech was a “No” to the proposal of holding talks while under sanctions and threats, and that the great Iranian nation and Establishment will stand firm to safeguard national principles, values, interests and security the same way that it stands ready for peace. Active and innovative diplomacy (diplomatic resistance) is a major and essential part of the Iranian nation’s maximum resistance.