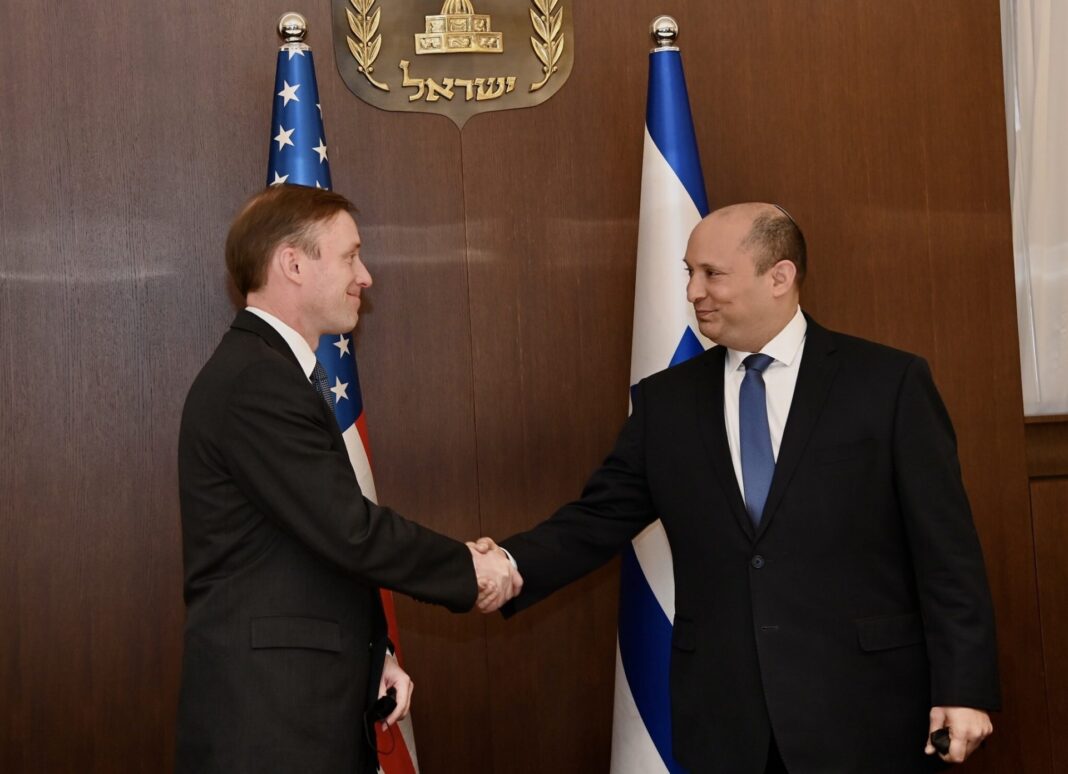 Four senior Israeli officials who attended meetings in Jerusalem with US National Security Adviser Jake Sullivan told Axios they came away reassured that Washington is ready to take a harder line on Iran if necessary and to take Tel Aviv’s views into account. He has sketched out three possible near-term scenarios on Iran’s nuclear program, according to Israeli officials.

1. An agreement within the next several weeks to return to full compliance with the 2015 deal, which he was skeptical would be achieved.

2. A “freeze for freeze” interim agreement to stop Iran from further accelerating its program.

3. No deal and new sanctions and pressure on Iran.

As the nuclear talks resumed in Vienna, anxiety was growing in the Prime Minister’s Office over the idea that the Joe Biden administration would seek a partial agreement that would provide Iran with sanctions relief without any nuclear rollback.

The idea of a possible “freeze for freeze” agreement was discussed during Sullivan’s meetings with Prime Minister Naftali Bennett, Foreign Minister Yair Lapid and Defense Minister Benny Gantz, all three of whom told Sullivan they oppose such a step, Israeli officials say.

Such a deal could prevent Iran from enriching uranium to weapons-grade levels. But Lapid told Sullivan that Israel already operates as though Iran has 90% enriched uranium, “and we don’t think there is any need to pay them not to do it”, according to one Israeli official.

Tehran denies seeking nuclear weapons, stressing it wants to master nuclear technology for peaceful purposes. Iranian officials have also stressed the country reserves the right to respond to any adventurism by the United States and Israel.

One senior Israeli official stated Bennett appreciated the fact that Sullivan made the trip despite the many other pressing issues the Biden administration is facing, and saw it as a signal that the White House is attentive to Israel’s concerns. The official added that the meeting was very substantive and could have bearing on both countries’ policies.

“For the first time, both sides really understood each other. Over time, there was ripening on both sides and we feel a bit more reassured after today,” the senior official noted.

Another senior Israeli official concluded after meeting with Sullivan that the Biden administration “is in a better place than we thought” on Iran, and the policy gaps are smaller than previously believed.

Sullivan told Bennett at the top of their meeting that Biden sent him to Jerusalem on Christmas week because he thought it was important “to sit together and develop a common strategy, a common outlook” on Iran and find a way forward that secures the interests of both US and Israel.

Sullivan also led a meeting of a US-Israel working group on Iran Wednesday along with his Israeli counterpart, Eyal Hulata. They discussed “the need to confront all aspects of the threat posed by Iran, including its nuclear program, destabilizing activities in the region, and support for terrorist proxy groups”, according to a White House statement.

Two Israeli officials who attended the meetings noted Sullivan made it clear that the window for further talks in Vienna could close by the end of January or the beginning of February.

Sullivan expressed skepticism about the chances of reaching a full agreement by then, the officials stated.

Bennett, Lapid and Gantz, meanwhile, argued that an interim agreement would offer a lifeline to the Iranian economy, with some of that money flowing to “Iranian proxies” that threaten Israel.

The Iranians have also rejected the idea of an interim agreement that does not provide full relief from US sanctions, and they contend that they’re negotiating in good faith for a return to the 2015 deal despite US suspicions that they’re only playing for time.