US Refuses to Veto Anti-Israel Resolution in UNSC 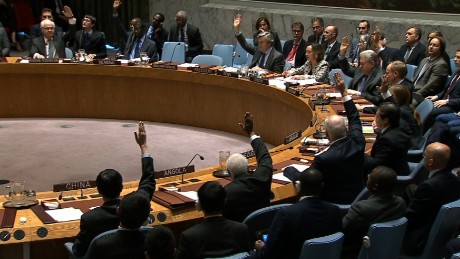 According to a report by IFP, Resolution 2334 was approved with 14 member states voting in favour, none voting against and one abstention — the United States.

There was applause in the chamber following the vote, which represented perhaps the final bitter chapter in the years of antagonism between President Barack Obama’s administration and Netanyahu’s government.

In an intense flurry of diplomacy that unfolded in the two days before the vote, a senior Israeli official had accused the United States of abandoning Tel Aviv with its refusal to block the resolution with a veto.

The Palestinian Authority hailed “a day of victory” and Palestinians were delighted by their rare diplomatic coup.

“This is a victory for the people and for the cause, and it opens doors wide for the demand of sanctions on settlements,” said Mustafa Barghouti, a Palestinian leader.

Speaking at the Security Council after the vote, US Ambassador Samantha Power said the decision underlined the Council’s long-standing position that “the settlements have no legal validity.” She claimed the US position was “fully in line with the bipartisan history” of how US presidents have approached the issue for decades.

The US did not agree with every word of the resolution, she said, and therefore had not voted in favor. But “we cannot stand in the way of this resolution,” she said, in the quest for “two states living side by side in peace and security.”

“The settlement problem has gotten so much worse,” she said, that it was now endangering that solution. “One has to make a choice between settlements and separation,” she said.