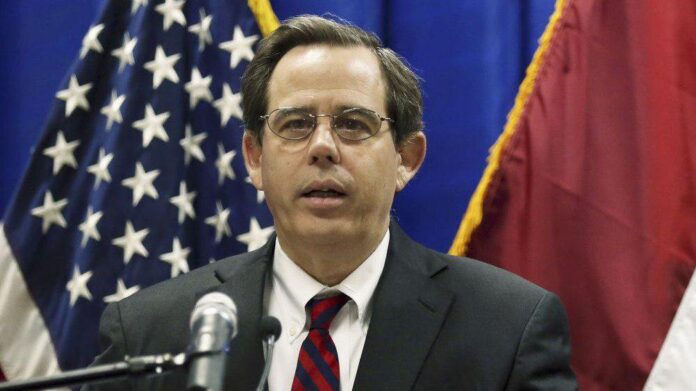 The US Acting Assistant Secretary of State Stuart Jones gave one of the most awkward press conference responses ever witnessed to a question about democracy in Iran and Saudi Arabia.

A reporter’s question about the recent elections held in Iran and the attitude of Saudi Arabia to democracy led to an awkward 20-second silence by a senior US foreign affairs official.

The US Acting Assistant Secretary of State for the Near East Affairs Bureau, freshly returned from accompanying President Donald Trump and Secretary of State Rex Tillerson to Saudi Arabia, seemed completely stumped by the relatively straightforward reporter’s question.

He was asked: “While you were over there, the Secretary criticised the conduct of the Iranian elections and Iran’s record on democracy. He did so standing next to Saudi officials. How do you characterise Saudi Arabia’s commitment to democracy, and does the administration believe that democracy is a buffer or a barrier against extremism?”

And then the senior State Department official fell completely silent, according to The Independent. For 16 seconds, although to Mr Jones it may have seemed more like an eternity.

During all these seconds, Jones raced through his mind thinking of a half-decent answer to a basic question about an apparent double standard.

The answer Jones landed on eventually was underwhelming, to put it mildly.

“I think what we say is that, uh, at this meeting, we were able to make significant progress with Saudi and GCC partners and, uh, both make a strong statement against extremism and also, um, and also putting in, putting in place certain measures through this GCC mechanism where we can combat extremism.”

“Clearly one source of extremism – one source – one terrorism threat is coming from Iran. And that’s coming from a part of the Iranian apparatus that is not at all responsive to its electorate,” he added.

The most amazing thing about all of this is that Jones is a long-time State professional. He’s not some flunky who was given a plum job thanks to some obscure White House connection. Start Department business is Jones’ bread and butter, Washington Examiner reported.

That he was so utterly unprepared to defend Washington’s apparent Saudi/Iran double standard is astounding. It suggests the State Department has not put in the time grappling with this issue. It also suggests few, if any, have bothered to ask the question.