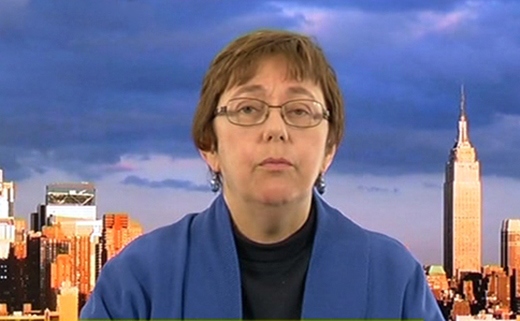 Sara Flounders, a senior member of the International Action Center, says that American media which are run by figures with militaristic mentality seek to hide the content of the valuable message of Iran’s Supreme Leader Ayatollah Khamenei to the youth in Europe and North America from the Americans, in particular the youth.

What comes next is the translation of an interview with Sara Flounders the Islamic Republic News Agency (IRNA) posted on its website on February 24:

The American author and anti-war activist described the letter of the Leader as immensely important and told IRNA that she had read the message which was released at a perfect time.

Flounders is a senior member of the International Action Center founded by former US Attorney General Ramsey Clark.

Flounders, who is in Lebanon to take part in a gathering dubbed international justice for Palestine, said that in the letter the Leader has appealed to the youth to conduct in-depth studies about Islam and its teachings, so that they could secure an insight into the objectives of the enemies of Islam who seek to paint an unrealistic image of this great religion.

She stressed that the enemies of Islam seek to set the stage for continued aggressions against Islamic countries.