Iranian Deputy Foreign Minister Seyyed Abbas Araqchi has blasted the US’ policy of exerting maximum pressure on Tehran, saying the hostile policy has resulted in the adoption of a policy of maximum resistance in Iran.

Araqchi made the remarks in a meeting with Saleh al-Arouri, the deputy chairman of the political bureau of the Palestinian Islamic Resistance Movement (Hamas), and his entourage in Tehran.

“This policy is another miscalculation by the US which has resulted in the Iranian people’s ‘maximum resistance’ policy.”

“The US will definitely achieve nothing through this policy,” Araqchi added.

Elsewhere in his remarks, he stressed that supporting Palestine is an inseparable part of the Islamic Revolution, and Iran will continue to back Palestine and counter the illegitimate goals pursued by the US and the Zionist regime in the region.

“The American ‘Deal of the Century’ initiative, which has been proposed with the aim of ending the issue of Palestine, stems from the miscalculation of the US and the Zionist regime, and is doomed to failure because of the integrated resistance of the Palestinian people and the axis of resistance,” Araqchi noted. 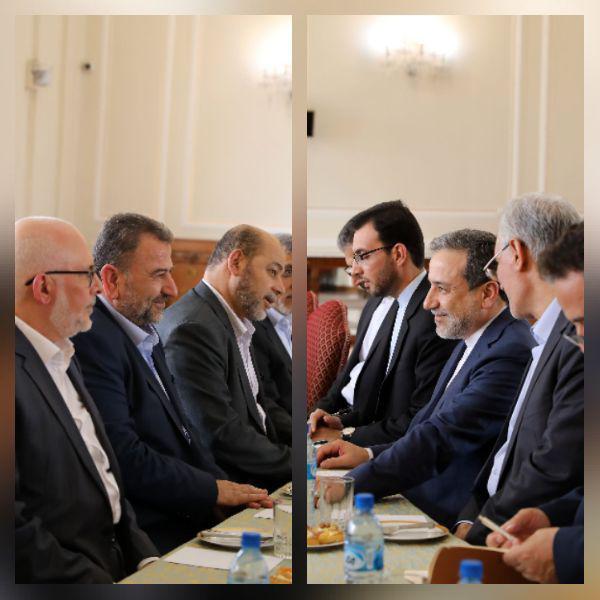 He also highlighted the need for forming a coalition of Muslim states to take a united stance in opposition to the initiative and in support of the liberation of Palestine.

In turn, the Hamas official appreciated Iran’s stances in support of Palestine, and underlined the movement’s solidarity with the Islamic Republic against the hostile acts of the US and the Zionist regime.

Presenting a report on the latest developments of Palestine, Al-Arouri pointed to the so-called ‘Deal of the Century’ and it pursues three major issues: the fate of the Holy Quds, the Palestinian refugees, and the siege of Gaza Strip.

The Hamas official said the Zionist-American initiative is aimed at providing maximum benefits for the occupying regime and creating new regional arrangements focused on the regime.

Al-Arouri also underlined the necessity of countering the dangerous initiative, and called for the Islamic countries’ joint effort to liberate Palestine and return refugees.