Why did the US House speaker invite Israeli PM to Washington? 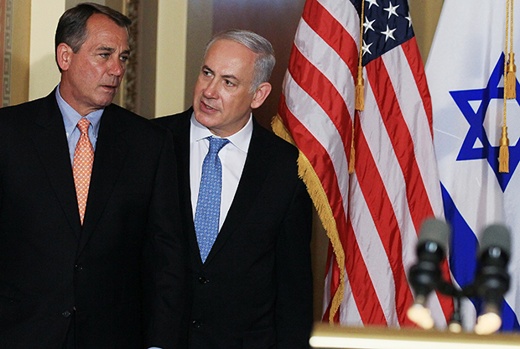 An invitation by the Republican speaker of the House to the Israeli prime minister to address a joint session of Congress without consulting the White House is a token of appreciation by Republicans to Israel.

In an unprecedented move, Speaker of the US House of Representatives John Boehner, (R. Ohio), has invited Israeli Prime Minister Benjamin Netanyahu to address a joint session of Congress in March on what he claims are grave threats posed by Iran and radical Islam. The following is a partial translation of an analysis on the matter released by Tasnim News Agency on January 25:

Over the recent years, especially since the failure of the Middle East peace process in the late 1990s and the 9/11attacks on America in 2001, regional and global developments have brought the Republicans in the US and the Likud Party in Israel closer together. As a result, a majority of Zionist lobbyists in the US have thrown their weight behind the Republicans.

Among other things, their support has contributed to a recent GOP victory in midterm elections and their winning back the Senate. The Republican victory came despite the fact that pledges by President Obama to lift the US economy out of recession, a legacy of President George W. Bush, and to withdraw American troops from Iraq and Afghanistan were both honored.

Boehner’s decision to bypass the White House to invite Netanyahu for a speech in Congress is more of a scenario orchestrated by the Zionist regime than an innovative initiative by him in reaction to the recent remarks of the US president on raising taxes or his threats to veto a fresh round of sanctions against Iran as far as nuclear talks remain ongoing. In fact, by extending an invitation to Netanyahu to deliver a speech on Capitol Hill, John Boehner has repaid a favor.

There is striking similarity between the remarks of Boehner to justify the invitation and the opportunistic comments of Netanyahu in the aftermath of suspicious security developments in Paris.

Netanyahu, and right-wing Israelis at large, seek three objectives all at once: First, they want to prompt nuclear talks between Iran and P5+1 to fall apart, second, they want to prevent the formation of a Palestinian state, and third, they seek to have the Jewish nation-state bill approved.