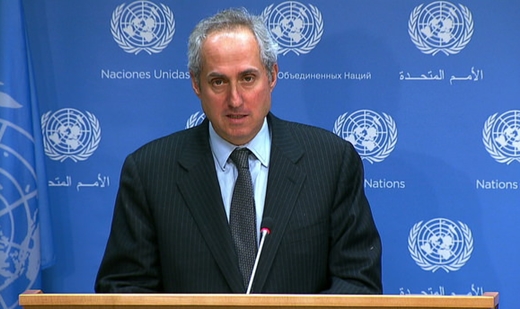 The United Nations on Friday suggested it would be willing to assist in a dispute between Tehran and Washington after Iran requested UN help in convincing the United States to stop what the Islamic Republic says are violations of state immunity.

Foreign Minister Mohammad Javad Zarif wrote to UN Secretary General Ban Ki-moon on Thursday to ask him to intervene with his ‘good offices’ after the top US court ruled that $2 billion in frozen Iranian assets must be paid to American victims of attacks blamed on Tehran.

‘We’ll obviously take a look at it,’ he told reporters.

‘As a matter of principle … the Secretary-General’s good offices are always available should both parties to whatever tensions or issue request it,’ Dujarric added.

‘To the extent that this letter was prompted by the recent Supreme Court decision in the Bank Markazi v. Peterson case, we believe the US laws and the application of those laws by the courts … comport with international law,’ he said.

Iran has become increasingly frustrated at what Tehran has said is the failure of the United States to keep its promises regarding sanctions relief agreed under an historic nuclear deal struck last year by Iran and six world powers.

In the letter, released by the Iranian UN mission, Zarif asked Ban to help secure the release of frozen Iranian assets in US banks and persuade Washington to stop interfering with Iran’s international commercial and financial transactions.

Kerry said Washington was not preventing anyone from doing legitimate business with Iran.

Tehran has called on the United States to do more to remove obstacles to the financial sector so that businesses feel comfortable investing in Iran without fear of penalties.