Ukrainians march in Kyiv as concerns rise over Russian invasion 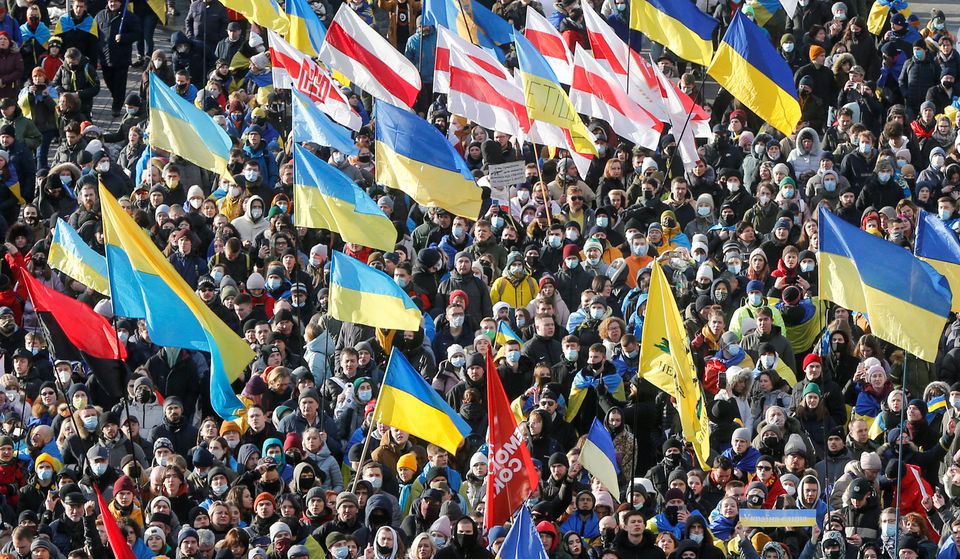 Thousands of protesters convened in Ukraine's capital city of Kyiv on Saturday to show unity amid increasing concerns over a Russian invasion.

Ukrainians filed through the centre of Kyiv in a column, chanting “Glory to Ukraine” and carrying Ukrainian flags and banners that said “Ukrainians will resist” and “Invaders must die”.

Ukrainian President Volodymyr Zelenskiy, who attended police drills in southern Kherson region, stated a Russian attack could happen at any time, but pushed back against what he called excessive amounts of information about a major looming war.

“The best friend of our enemies is panic in our country. And all this information is just provoking panic and can’t help us,” he continued, adding, “I can’t agree or disagree with what hasn’t happened yet. So far, there is no full-scale war in Ukraine.”

Ukrainian defense officials have announced they are ready to fight back against Russia amid reports that it could invade the former Soviet state any day.

“Do not doubt, the Armed Forces are absolutely ready to fight back and will not give up the Ukrainian lands!” Ukrainian Defense Minister Oleksii Reznikov said in a statement Saturday.

The commander in chief of Ukraine’s armed forces, Lt. Gen. Valerii Zaluzhnyi, stated in a statement that the Ukrainian military is ready to meet Russian forces with “Stingers,” not “flowers.”

“We are constantly improving our defense capabilities, coherence of units and military skills. We have created combat formations and managed to deploy the Territorial Defense Forces in a short time and arm them with ATGMs and MANPADS. We have strengthened the defense of Kyiv. We went through the war and received proper training,” Zaluzhnyi continued.

“Therefore, they are ready to meet enemies not with flowers, but with Stingers, Javelins and NLAW. Welcome to hell!” he added, referring to several types of weapons.

Over the last few months, the US and UK have been accusing Russia of planning to invade Ukraine, which Moscow has vehemently denied, dismissing the allegations as “fake news.” Ukraine has also urged Western media and politicians who are warning of an “imminent” invasion to stop fueling panic.

Russia has repeatedly expressed concern over the continuing expansion of NATO towards Russia’s borders – in particular, the idea of Ukraine potentially joining the military bloc. Moscow has called Kiev’s aspirations to join NATO a “red line,” and attempted to restart dialogue with the US and NATO with proposals for security guarantees in December. After a series of talks, the US and NATO rejected Moscow’s demands, which included guarantees to halt the eastward expansion of the military bloc and the deployment of offensive weapons along Russia’s borders.