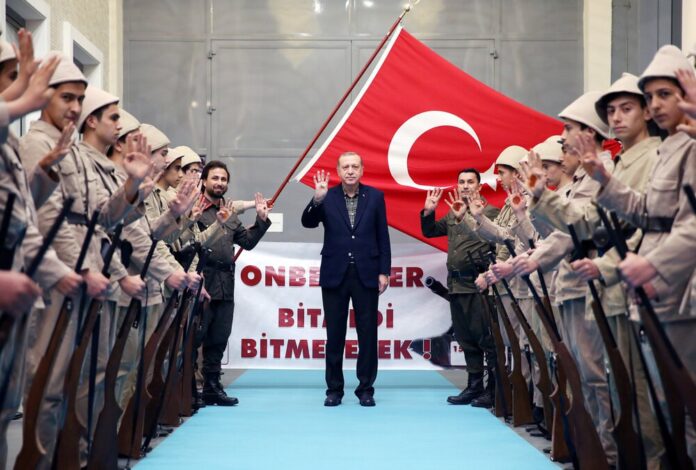 An Iranian expert of Turkish developments says Recep Tayyip Erdoğan is pursuing a policy of balancing power between the United States and Russia in Syria and is walking on a tightrope the two sides of which are controlled by Washington and Moscow.

Seyyed Ali Qaem-Maqami says Russia and the US do not want to lose Turkey or move the country completely towards another trail.

Qaem-Maqami has stated in an interview with Khabar Online that the clashes in northeast Syria have been decreased in recent days due to the fact that Syrian Kurdish forces have withdrawn from the region under the agreement between Russia and Turkey.

“However, they are still looking for help from the Americans. They do not know what Washington agreed upon with Erdoğan behind closed doors. The US, as it seems, has preferred the Syrian oil to supporting the Kurds. Putin, meanwhile, has taken his share from Erdoğan. Meanwhile, the central government still is not allowed to enter these areas!”

Qaem-Maqami believes that in the current situation, Syria has actually disintegrated.

Q: Turkish officials have not announced whether they intend to strike again after the ceasefire. The latest news comes from the Turkish ambassador to Syria, who said that Ankara has no plans to launch a new offensive in northeast Syria. What does Erdoğan want in Syria in general, and what would be the result?

A: Turkish President Recep Tayyip Erdoğan has backed terrorist groups since the beginning of the terrorists’ war against the Ba’athist government in Syria. The Salafi Takfiri terrorist groups have now been renamed to “Syrian National Army” under the command of the Turkish army and intelligence. The Istanbul-based “National Coalition for Syrian Revolution and Opposition Forces” has announced Abdurrahman Mustafa as the Prime Minister of interim government of Syria. The Syrian National Army or Jaish al-Watani is also considered as the interim government’s army.

Erdoğan considers Syrian President Bashar al-Assad and the Syrian Armed Forces illegitimate. He is trying to occupy all the areas of northern Syria and leave their control to Jaish al-Watani to prevent the Syrian Armed Forces from entering these areas. He would then relocate about two million Syrian refugees residing in Turkey to the region.

Erdoğan has even threatened to confront the Syrian Armed Forces if they enter northern Syria, including the east of Euphrates, especially Afrin, Idlib and Jarabulus. Erdoğan also said that Manbij and Ayn al-Arab should be under the control of the Turkish army and Jaish al-Watani.

Based on the 13-point agreement with the US, Turkey launched Operation Peace Spring and entered the area between Tal Abyad and Ras al-Ain at a depth of 32 kilometres and a length of 120 kilometres. Turkey fought with the Syrian Democratic Forces and the People’s Defense Units affiliated with the “Kurdistan Communities Union under Abdullah Ocalan” using US intelligence, military and weapons supports.

About 800 people from the Syrian Democratic Forces and the People’s Defense Units are said to be killed. According to Erdoğan, more than thirty civilians and Turkish nationals and 130 Syrian nationals of Jaish al-Watani were killed in Operation Peace Spring. According to the agreement between Turkey and the US, the Syrian Democratic Forces were supposed to withdraw from the M-4 highway near the Operation Springs area.

Meanwhile, the United States has announced that the forces have withdrawn from the M-4 highway. However, the Turkish Foreign and Defense Ministry insisted that the claim must be confirmed by the Turkish military and intelligence, and if the forces of the People’s Defense Units are seen beyond the highways, the Turkish army will destroy them. One of the sections of the US-Turkey agreement was that the US must not announce new sanctions against Turkey during the ceasefire in the area of Operation Peace Spring, and remove the previous sanctions after the withdrawal of Turkish forces and ending the operation. However, the US Congress approved two bills of recognising “Armenian genocide” and “new sanctions against Turkey.”

Q: What was the agreement between Erdoğan and Putin? Has the president of Turkey been able to keep Putin agreed with the continuation of the operation?

A: Turkish President Recep Tayyip Erdoğan and his Russian counterpart Vladimir Putin signed a 10-point agreement in Sochi. According to the agreement, the Syrian Democratic Forces and People’s Defense Units based in the areas between Tal Abyad and Jarabulus in the west of the Operational Area of Peace Spring must withdraw. They must also withdraw from Ras al-Ain to the Iraqi borders in the east of the Operational Area of Peace Spring in a depth of 32 kilometres. Russia also announced that 34,000 troops of the People’s Defense Units with three thousand heavy weapons had withdrawn below the safe zone line.

Erdoğan has said that Turkey should control 444 km of eastern Euphrates, but the United States and Russia are blocking the Turkish army and Jaish al-Watani militia from entering the area.

The areas of the eastern Euphrates have rich sources of mines, oil and gas, water and dams, agriculture and animal husbandry. The United States and Turkey are working together to deprive the Syrian government and army of these economic and energy resources.

Erdoğan claims he is not eyeing Syrian lands, but his practical policy proves the contrary. Erdoğan and Mevlüt Çavuşoğlu claim the Turkish military has the right to enter Syria on the basis of the Adana Agreement on Combating Terrorism, and is entitled to defend itself and preserve the survival of the Turkish government. However, he has also threatened to back Jaish al-Watani’s battle with the Syrian Armed Forces under Bashar al-Assad’s command.

Q: Considering the Putin-Erdoğan agreement, what is going on between the US and Russia? And what is the danger for Iran in particular?

A: The United States directly and Russia indirectly have protected Syrian Democratic Forces and People’s Defense Units. The 10-point agreement between Turkey and Russia has allowed part of the Syrian Arab Armed Forces under the command of Bashar al-Assad to enter the areas of Manbij, Ayn al-Arab, Hasakah, Qamishli, Cizre and Kamaliyah. As a result, Erdoğan’s plan to occupy northeast Euphrates has failed.

The US will remain in Syria to maintain the security and illegitimate aggressive interests of the racist Israeli regime. The US goal is to disrupt or threaten the process of establishing and expanding Iran-Iraq relations with Syria. The United States will occupy areas of western Iraq and eastern Syria. As Donald Trump, Centcom and the Pentagon claim, they will prevent the killing of Kurds and will not allow the security of Syria and Iraq’s oil and energy resources to be compromised.

Recep Tayyip Erdoğan is pursuing a policy of balancing power between the United States and Russia in Syria and moving on a path that is controlled by Washington and Moscow. This political expert also believes that Russia and the US do not want to lose Turkey or move the country completely towards another path.  In the current situation, Syria has actually disintegrated.

Q: In your opinion, why does Erdoğan pursue this policy? Has he become politically motivated at home or has the coup time removals had a negative impact on his image?

A: Recep Tayyip Erdoğan has removed all the leadership and founders of the AKP. There is intense conflict within the party. A number of AKP leaders and MPs have been ousted or forced to resign at the behest of Erdoğan.

Dissatisfaction with the presidential system has increased. The AKP’s internal opposition insists that individual dominion has been created and that the AKP has distanced from its principles. The rent and nepotism is established in the Turkish parties and government. At least half of Turkey’s political and social community wants a return to a democratic parliamentary government. Erdogan’s presidency has packed down and disenfranchised parliament and the judiciary.

According to opposition parties, particularly the National Salvation Party run by the late Necmettin Erbakan, Erdogan’s policy towards Syria has resulted in the destruction and killing of the Syrian people and has served the interests of Zionist. Erdoğan sees his position is being weakened in domestic politics. Therefore, he is trying to silence and control all dissidents through outbound operations and incite a sense of nationalism and militarism. This as the opposition parties in Turkish parliament have been forced to extend Turkish military overseas operations license in Iraq and Syria for another year on October 31. Otherwise, Erdoğan would accuse them of being traitor and supporters of terrorism.

Recep Tayyip Erdoğan claims he is fighting infidels in Syria, but the US and NATO are Turkey’s strategic allies in this fight.

Q: Given Erdoğan’s position inside Turkey, is it in his interest to continue this role? What role does Turkey exactly play in the Middle East?

A: Erdoğan considers Syrian President Bashar al-Assad and the Syrian Armed Forces under Assad illegitimate. Following the US occupation of Iraq in 2003, new political and strategic developments in the Middle East began, and the regional countries of the two blocs got involved in fierce confrontation and intense competition. On one hand, there was an anti-Zionist resistance front consisted of Iran, Syria, Lebanon’s Hezbollah, the Palestinian people, Hamas and the Palestinian Islamic Jihad movement. On the other hand, the Zionist anti-resistance front consisted of the United States, Britain, Israel and the reactionary regimes of the Persian Gulf was organised and got united.

Syria has signed a strategic partnership agreement with Iran and Russia to save itself from isolation. Iran turned into Syria’s biggest political and economic patron. That’s because Iran, Syria, Palestine and Hamas were and are still facing dangerous enemies and occupiers such as the US and Israel. The United States has tried to divide the Muslim and Arab world into two blocks, the “Shiite Crescent” and the “Sunni Axis”, and to portray the so-called Iranian-led Shiite Crescent as a threat to the Sunni and Arab world.

The United States and the Israeli regime mobilised the regimes of Al Saud, the United Arab Emirates, Qatar, Turkey and Egypt. One of the goals of the imperialist and Zionist axis was to occupy, destroy, and dismantle Syria as the link between the anti-Zionist resistance movements. This role was assigned to the AKP led by Recep Tayyip Erdoğan.

Turkish government must cooperate sincerely with anti-Zionist resistance and assist the front to expel the US from Syria. It must cooperate with the government of Bashar al-Assad and the Syrian Armed Forces, and withdraw from Syria and hand over the entire Syrian state to the Syrian government and army. Otherwise, the claim to support the territorial integrity and political and national unity of Syria is meaningless.