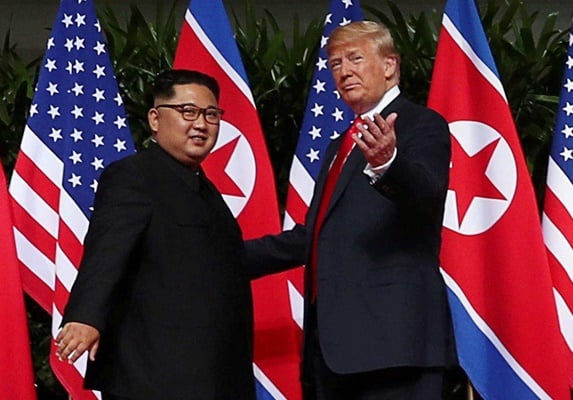 An Iranian political analyst believes the agreement signed by US President Donald Trump and North Korean leader Kim Jong-un on Tuesday can prepare the grounds for the possible reunification of the two Koreas.

The meeting between Trump and Kim came in a situation that the verbal attacks between the two head of states could have prevented the visit. However, they finally met in Singapore on June 12. The meeting made the headlines in the world and had a lot of repercussions.

Nevertheless, there are still doubts about the future of negotiations. Trump and Kim signed a document after their visit, and it is said that North Korea has accepted nuclear disarmament, but the question is that would Trump be able to handle Kim Jong-un’s requests to prevent the failure of talks?

Khabar Online news website has conducted an interview with Ardeshir Sanai, a university lecturer and international affairs expert on the issue:

Q: What was the importance of meeting between Trump and Kim Jong-un? What makes this visit historic?

A: This meeting was one of the most significant events that occurred in the 21st century and could be considered as a milestone in the history of international relations. The significance of this meeting doubles when we see the two leaders are radicals. The president of the United States, who has a particular viewpoint on world affairs and foreign policy in the United States, has shown he is not willing to withdraw from his previous positions that he had in his campaigns. On the other hand, the North Korean leader, after his father’s death, has always been one of the most radical decision-makers in North Korea, both in domestic and foreign affairs, and it seemed that he would not show the slightest flexibility.

Q: Kim Jong-un has shown he does not believe so much in changes. Do you think this visit can be a start for future changes?

A: The visit will have a very significant impact on North Korea’s political fate, its regime, the issue of nuclear weapons, and the crisis on the Korean Peninsula, and it seems Trump is winning one of the greatest achievements of his presidency. On the other hand, North Korea will eventually be disarmed and possibly move towards the end of the two-Korea era and begin the process of reunification with the South.

Q: Do you think that this move can be compared with Iran’s nuclear agreement process, and is it expected to improve Iran-US relations?

A: It seems that the visit could affect the Iran-US relationship, and as we saw, Trump referred to Iran in his remarks after the historic meeting. With the withdrawal of the United States from the JCPOA and the imposition of sanctions by the due date, this meeting could lead to further US pressure on the Islamic Republic of Iran. In this way, the United States would resolve almost all the problems with the countries that George W. Bush called the “Axis of Evil”, and it remains to be seen what will happen to the Iran’s case.

Q: Do you think this meeting and agreement will be sustainable? What are the doubts about it?

A: No agreement has yet been reached, and this is the beginning for negotiations in the future. But, given North Korea’s conditions, there is no solution left for the country, and it ought to finally move towards accepting the other party’s demands after several decades. The economic conditions and the domestic situation in North Korea are so devastating that someone like Kim has been forced to come to the negotiating table to resolve problems with the United States.