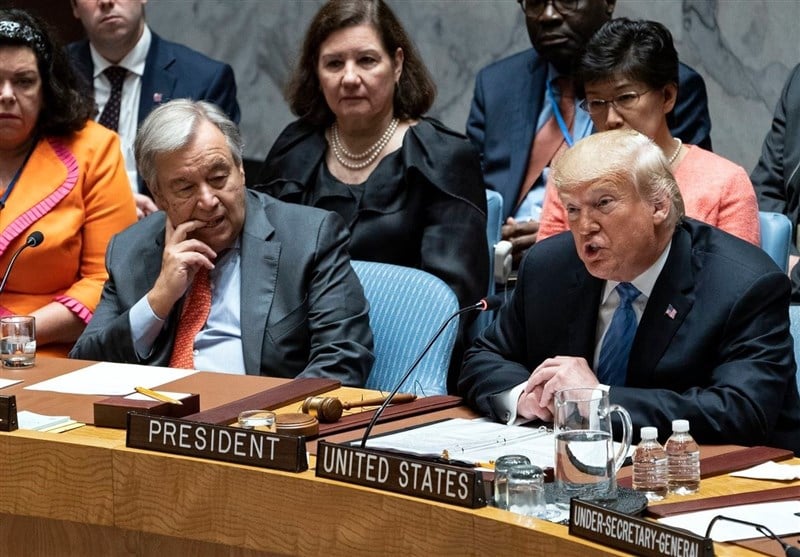 US President Donald Trump presided over his first UN Security Council session but faced opposition from member states on his unilateral policy, particularly on Iran issue.

The UN Security Council meeting on the non-proliferation of weapons of mass destruction was held Wednesday, one day after trump attacked Iran at his General Assembly speech.

During the Wednesday session of the UNSC, Trump renewed old allegations against Iran and reiterated his harsh criticism of Iran.

“I ask all members of the Security Council to work with the United States to ensure the Iranian regime changes its behavior and never acquires a nuclear bomb,” he said.

“A regime with this track record must never be allowed to possess a nuclear weapon,” Trump said, as he justified his decision to withdraw from the 2015 nuclear deal, and to reimpose economic sanctions.

However he also thanked all three countries for pulling back from an offensive against militants in Idlib.

After Trump, French President Emanuel Macron said that a “serious crisis of confidence” has emerged after US President Donald Trump’s decision to withdraw from the Iran nuclear deal.

In his message before the UN Security Council, Macron said that while the 2015 deal is “imperfect”, it ensures that Iran would not be able to obtain nuclear weapons.

He added that since the deal was signed, the “pathways of the signatories of the JCPOA have diverged…but we still, all of us here, retain the same objective of preventing Iran from obtaining nuclear weapons, and guaranteeing strict international control on the peaceful use of their nuclear programme”.

Bolivian leader Evo Morales launched a blistering critique of US policy toward Iran as well as Trump’s immigration policies that resulted in the separation of migrant children from their parents.

Bolivian President Evo Morales went further, linking Trump’s actions to a broader US history of intervention in countries such as Iran.

“In 1953, the United States financed, planned and implemented a coup d’etat against a democratically-elected government,” he said, referring to Iran. “After that, for many decades the United States supported an authoritarian government that allowed the profits from oil companies to line the pockets of transnational countries.”

“This situation endured until the revolution of 1979,” Morales added. “And now that Iran has retaken control of its own resources, it is once again the victim of a US siege.”

The session came a day after Trump anti-Iran remarks at General Assembly meeting. Iranian President Hassan Rouhani responded to Trump’s anti-Iran remarks, saying the US administration is violating the rules of international law by withdrawing from the 2015 nuclear deal that Iran reached with six world powers, including the US.

He also emphasized that the US is pushing other countries to violate the Iran deal, known as the Joint Comprehensive Plan of Action (JCPOA), and that it is threatening all countries and international organizations with punishment if they comply with Security Council Resolution 2231, which endorsed the JCPOA.