General Kenneth McKenzie, the commander of US Central Command, has acknowledged the capability of Iranian ballistic missiles with high precision.

The top general has warned that Iran has a “very capable” ballistic missile program, calling it “the one thing the Iranians have done over the last three to five years.”

Iran has shown its missiles have a proven ability to strike targets with precision, McKenzie noted.

In January 2020, Tehran launched more than a dozen ballistic missiles from launch sites at three bases in western Iran that hit two Iraqi bases, Al Asad and Erbil, where hundreds of Americans were stationed. The missiles turned buildings, aircraft and living quarters into smoldering rubble. No one died, as most had managed to shelter in underground bunkers and trenches, but concussions from the blasts injured at least 100 American troops.

“Those missiles hit within tens of meters of their targets,” McKenzie stated, noting, “The one thing the Iranians have done over the last three-to-five years is they built a very capable ballistic missile platform.”

Iran has called the January 2020 operation “only a slap across the face” of the United States, stressing that “military moves like this are not enough, and the Americans corruption-stirring presence should come to an end”. 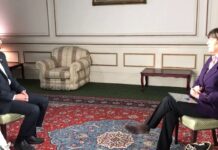