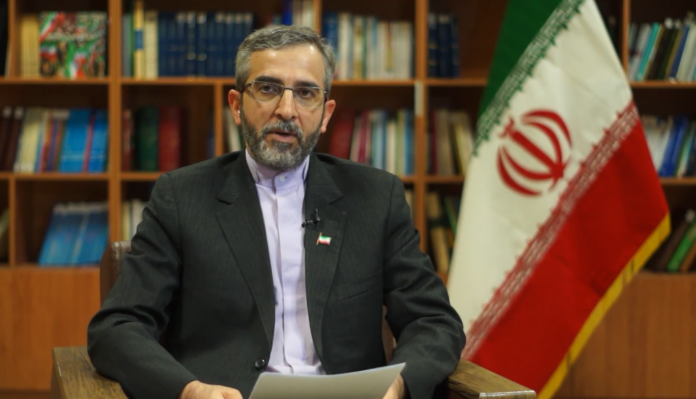 Iran’s Deputy Foreign Minister Ali Bagheri has stated Tehran will not negotiate on its defense and security capabilities with the world powers. The top nuclear negotiator has stressed Iran requires a commitment that the United States will not again leave the nuclear deal.

Iran requires a commitment that the US will not again leave the nuclear deal signed with world powers in 2015, Bagheri told The Guardian.

He said that talks in Vienna between Tehran and other signatories had failed to reach agreement on a means of verifying that US sanctions had both been lifted and had a practical impact on trade with Iran.

“We need verification, and this remains unresolved. It is one of the issues that remains not finalised. It is not enough for the ink to be put on the agreement,” he added.

Bagheri did not rule out an independent body being responsible for verification.

The Vienna talks are due to recommence at the end of the month after being suspended by Iran, after the June election of a new president, Ebrahim Raisi.

Bagheri is touring European capitals to set out the Iranian negotiating position.

Iran has announced it will not take its own steps back into full compliance with the deal until verification of US actions has been secured. Iran has been increasing its uranium stockpile and use of advanced centrifuges beyond the limits set in the deal. It has limited the access of the UN nuclear inspectorate.

Defending his demand that the US give a guarantee that it will comply with the agreement, Bagheri stated that “this is about an agreement not a policy. If there is a peace agreement between two states, it has the effect of a treaty. This is international law. It is not intended that domestic laws of the US can prevail over an international agreement. That is against international law”.

He noted he wanted European powers to give their own guarantees that they will trade with Iran, regardless of the US position, possibly by using a blocking statute nullifying the effect of US sanctions on European firms that trade with Iran.

Bagheri denied that Iran had been stalling on the talks’ resumption in an effort to develop its own nuclear program, saying it was natural for a new government to take time to prepare its negotiating position and to hold bilateral talks with the other parties.

The official repeated calls for all US sanctions linked to the nuclear deal to be lifted.

Iran views sanctions that the US says were imposed for Iranian acts of terrorism or human rights abuses as linked to the nuclear deal, and therefore requiring lifting.

He also ruled out discussions on Iran’s missile and security program being included in the agreement.

He stated, “The JCPOA (Joint Comprehensive Plan of Action) has a clear framework and other issues are not relevant. We are not going to negotiate on our defence capabilities or our security.”

He added, “Iran’s relations with other countries did not need a guardian.”

He denied his negotiating stance was so tough that it would be impossible to reach an agreement in Vienna.

“We are just saying that in accordance with the JCPOA the sanctions should be lifted. We did a deal, and our view is that it should be implemented,” he continued.

Asked if he was requiring the Vienna talks to go back to the start, he announced, “What is important is not from where we started, but what is important is that we achieve a deal that has practical results for the parties. Our main objective is to remove the illegal sanctions that they have imposed on the Iranian nation in breach of UN resolutions. Any sanctions in breach of the JCPOA imposed by President Obama and President Trump have to be lifted. That is the agreement set out the JCPOA.”