The Dedication of an Iranian Doctor now Commemorated in Iraqi Schoolbooks 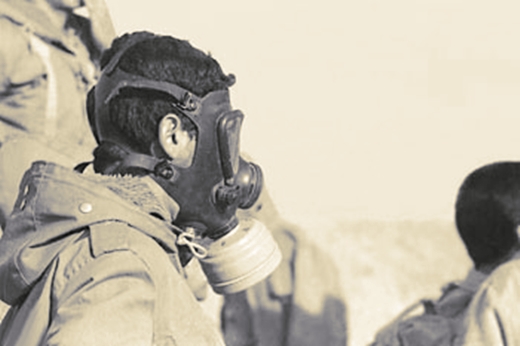 Authorities from the Iraqi education system have decided to dedicate the subject of one of the lessons in the fourth grade book to an Iranian doctor who saved tens of children who had been poisoned by chemical weapons in Halabja.

Hamshahri writes: What do heroes look like? How did they become heroes? How did their names become immortal?

There are thousands of stories of real people, not imaginary, who at just the right moment of a person’s life, become unforgettable heroes. They are those who made fateful decisions which affected their past, present and future.

Dr. Heshmatollah Veisi, an Iranian doctor, is one of those heroes.  He saved tens of children who were the victims of the chemical attack in Halabja.

Now, as a sign of gratitude, Iraqi educational authorities have decided to make him the subject of a lesson in the fourth grade textbook. They want to narrate the story of a brave man who put himself in danger, and who saved many children. They were neither his relatives, nor from his country. This is not how the story ends, however. Years later, he reunited two of the children from the Halabja chemical attack with their families.

I talked to him about those days in Iraq.

Your name and your life story is being recorded in schoolbooks. This seems like a great honour.

Yes. It’s the story of children who were affected by chemical attacks in Halabja. They want to thank an Iranian who was a victim of a chemical attack himself. The lesson will be titled, “I am an Iranian.”

How did you feel when you found out that your name would be published in a different country, and knowing that children would know you as “The dedicated doctor”?

It’s difficult to describe. It’s not as if I want to be world-famous. God knows that I didn’t do it for praise. The day I went to Halabja, I didn’t consider my health, nor did I think that I’d be praised someday. I went there because the victims were innocent children who couldn’t do anything about it. I was a victim of chemical weapons myself, and I knew that only people like us had experienced such pain and suffering. I could sympathize with them. How could someone do what I did, without knowing what those children were going through? No-one would have volunteered for such a job, and those kids would have been abandoned. I invented a medicine to improve the lungs of chemical attack victims, but didn’t use it myself. I tried to make sure that this medicine would be available to everyone around the world for free. I promised myself to give my life and my money for my country. I dedicated my health then, and now I can dedicate my wealth. I’m proud to be an Iranian who can help others worldwide. I became a member of Medecins Sans Frontieres, to fulfil that desire. I’m an Iranian, and the compassion of Iranians is unlimited – the world should know that.

You were also affected by chemical weapons?

Yes, in the Kerbala 5 operation, in Shalamcheh. They dropped chemical weapons on us. Even though I was just a non-combatant, I was affected. I was transferred to Baghiatallah Hospital in Tehran. I was admitted there when I heard Imam Khomeini’s speech asking for us to go and help the disaster-stricken people of Halabja. I couldn’t remain in the hospital after hearing that, so I went. When I told my uncle I was going there, he tried to stop me, but when my mother heard, she gave me permission to go. She saw me off with eyes full of tears, but she wanted me to help others.

Tell us about Halabja. What did you see there?

Disaster is not a strong enough word to describe what I saw. There were corpses everywhere. A child who couldn’t even climb down the steps to get out of a house. An 8-year-old who was cradling his baby sister, not knowing what to do, but imitating his mother by trying to give milk to the baby. A mother who had tried to save her baby, but failed. An infant only a few months old left in a corner, whose mother had tried to save her other children. So many had been blinded. Many were crying from the burns in their eyes, and many more lost their eyes entirely. Even the photos of those days can’t show the pain and tragedy that was there. Iraq dropped three types of chemicals on Halabja on March 15-16 1988 – mustard gas, toxic gases and nerve agents. We set up our tents immediately. Everyone was bringing children, often not their own, or who was too young to know what it meant to lose parents, but was crying with pain. I didn’t know what to do, faced with such inhumanity.

How were the medical facilities there?

Almost nothing. I had a small bag with me, with a few bandages and first aid medicines. I helped those kids as much as I could, then took 17 younger children back to Kermanshahr. We put those kids in a pool and washed them, then admitted them to Tehran and Kermanshahr hospitals.

Do you know what happened to them afterwards?

I was separated from the kids for a while, since I was suffering from chemical inhalation myself, and was not in a good condition. When I recovered, I searched for them. It’s hardly an exaggeration to say I scoured the earth for them. I found 40 kids from the Halabja disaster in Tehran and Kermanshahr graveyards. On their headstones, it was written, “Unidentified Martyr.” That was it, until 2 years ago, I found out that one of the kids, called Ali, had gone back to Kermanshahr to look for his parents. He was one of the kids I’d saved. A family from Mashhad, who had children themselves, was in Kermanshahr during the war. When they saw Ali, they adopted him. Later, they told him the truth, and just 2 years ago, Ali decided to go and find his family. I helped him find his family, who live in Iraq now. I found another girl called Maryam last year, and helped her to find her parents last year.