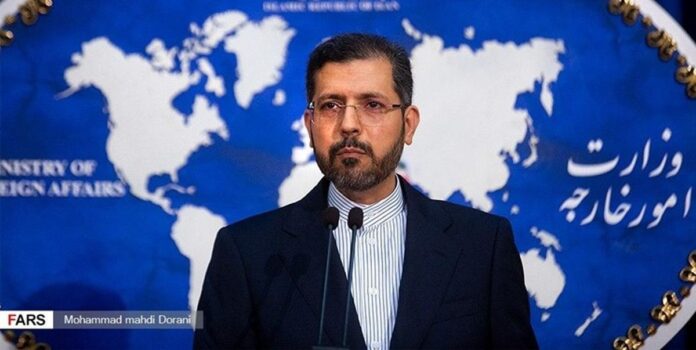 The Iranian foreign ministry spokesman has dismissed a call by Saudi Arabia and Bahrain to be included in any possible international talks on Iran.

“Tehran’s message to these countries is that Iran is the anchor of stability in the region.

Iran is a historical country in the region, and like an elder brother, has tried to condone others’ mistakes, but they should know what their status is and to what extent they can talk,” said the spokesman in a Monday press conference.

“Some countries put all their credibility on the line to achieve their objective during the tenure of the outgoing US president. They spent their own people’s money to buy security for a few days. Obviously, they are worried today,” Khatibzadeh added.

Khatibzadeh’s comments came after Saudi Arabia and Bahrain called for Persian Gulf States to be consulted on any potential negotiations with Iran.

Saudi Foreign Minister Prince Faisal bin Farhan had demanded that the kingdom be “fully consulted” on “what goes on regarding negotiations with Iran.”

In his Monday remarks, Khatibzadeh recommend that “Saudi Arabia and its rulers note the problems they have created every day for their own people as well as for the people of the Muslim world and the Arab world can be resolved only if they correct the approach they have adopted, and that they will gain nothing by playing blame games.”

He further said that unfortunately, some Takfiris schools are being run with money provided by Saudi Arabia and some other countries.

“The sooner they stop moving on this wrong path, the better it will be for the region and for themselves as well as for the dear people of Saudi Arabia.”

The spokeman said, “Saudi people deserve to have better policies rather than seeing their rulers setting their eyes on the bloody hands of some transregional players such as Israel and the United States.”