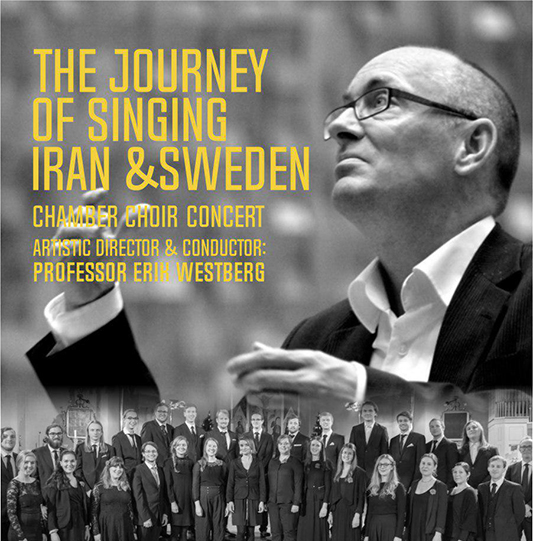 Tehran is hosting a musical performance of Swedish and European music on Saturday that will be performed by the Chamber Choir of the School of Music in Pitea.

The event scheduled for April 15 is formally known as ‘Iran-Sweden Journey of Singing.’ The show starts at 9 pm at Niavaran Cultural Center’s Persian Gulf Hall.

The group comprises 35 choir singers and is headed by artistic director and conductor Erik Westberg — who studied choral conducting at the Royal College of Music in Stockholm.

The musical performance has been organized by the Swedish Embassy in Tehran along with Artasam Cultural Center. Headed by Zamani, Artasam institute started work in 2016 as an organizer of cultural and artistic events.

According to Zamani, the Swedish choir will also meet with musicians in Isfahan. “They will be exchanging choral repertoires and practice together.”

After having toured Europe, the US, Brazil and Africa, this is the first time the choir is performing in the Middle East.

Journeys of Singing are a series of events which look to promote cultural and artistic exchange between nations. “We believe that the best way to transition to globalization is through artistic and cultural exchange with a focus on local cultural identity,” Zamani said.

“This induces natural communication and dialogue among different cultures and nations, which is more effective.”

The first edition of the Journey of Singing was held last year in Tehran when two German choir conductors, Markus Detterbeck and Jan Schumacher, held a workshop and competitions for Iranian choirs. The winning Iranian choirs will attend a musical festival slated for May 25-28 in Germany, Zamani said.

The Chamber Choir of the School of Music in Pitea at Lulea University of Technology was founded in 1990 by Westberg. The choir has performed works by composers such as Bach, Brahms and Mendelssohn and has several recorded albums.