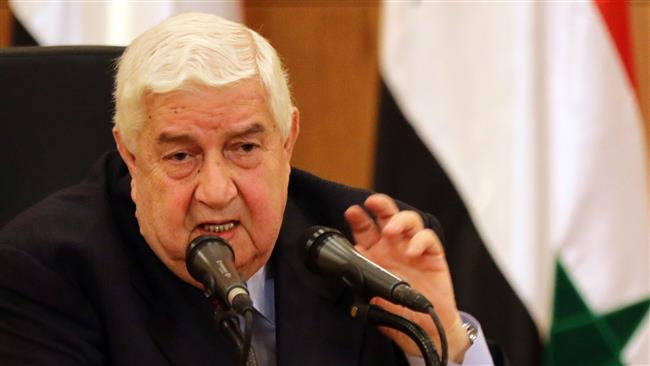 Syrian Foreign Minister Walid al-Muallem has warned against any foreign ground intervention in his country after reports emerged that Saudi Arabia and Turkey are considering the dispatch of troops to Syria.

“Any ground intervention on Syrian territory without government authorization would amount to an aggression that must be resisted,” Muallem said at a news conference in the Syrian capital, Damascus, on Saturday.

The senior Syrian official said that potential aggressors would return dead to their countries.

“Let no one think they can attack Syria or violate its sovereignty because I assure you any aggressor will return to their country in a wooden coffin, whether they be Saudis or Turks,” he warned.

Moscow “registers a growing number of signs of hidden preparation of the Turkish Armed Forces for active actions on the territory of Syria,” Konashenkov added.

Ankara has rejected the claim, saying it has no plan “of staging a military campaign or ground incursion in Syria.”

On the same day, Saudi Arabia voiced readiness to participate in any ground operations in Syria if the US-led coalition, which is allegedly targeting terrorists in Syria, decides to start such operations. US State Department spokesman John Kirby also welcomed the Saudi decision.

“I don’t think they will do what they say about using ground forces, but at the same time, when I look at their crazy decisions made not just in Yemen but in other areas nothing can be ruled out,” Muallem said, alluding to the Saudi military campaign against Yemen.

Saudi Arabia is a member of the so-called US-led coalition that has been conducting air raids against what are claimed to be the Daesh terrorists inside Syria without any authorization from the Syrian government or a UN mandate since September 2014.The US-led strikes have, on many occasions, targeted Syria’s infrastructures and left many civilians dead.

The Syrian foreign minister also blamed the Saudi-backed opposition delegation for the suspension of international talks aimed at finding a political solution to the ongoing conflict in Syria.

A fresh round of UN-brokered peace talks between Syrian warring sides suspended in the Swiss city of Geneva on Wednesday. The Geneva negotiations were halted after the so-called High Negotiations Committee (HNC), a Saudi-backed anti-Damascus opposition group, failed to show up.

Muallem added that the opposition delegation decided to walk away from the negotiations after victories made by the Syrian army, saying that Saudi Arabia, Qatar and Turkey have been trying to undermine UN efforts to hold a dialog between the government and the opposition.

He said Damascus is ready to negotiate with the opposition without any preconditions.

“Everyone should realize, on top of all [the UN Special Envoy for Syria Staffan] de Mistura, that Syria is going for a Syrian-Syrian dialog without any preconditions and will not comply with any precondition set by any party whatsoever,” he said.

The nearly five-year long conflict in Syria has killed more than 260,000 people and forced millions from their homes since its onset in 2011.