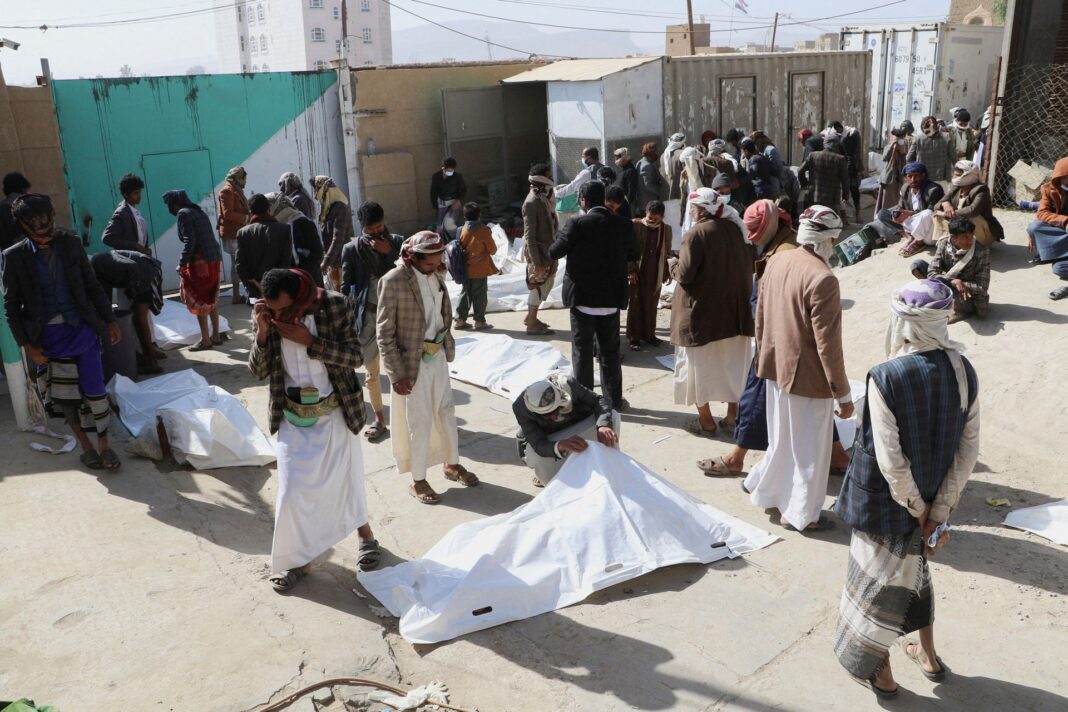 Yemeni people who were lucky to survive the recent Saudi coalition raids on Saada prison, recount the scary misery they went through, calling it war crime.

Yemeni detainee Mohammed Ali Salem was lucky a missile fired by fighter jets of the Saudi-led coalition on the next ward caused a wave strong enough to shatter the door of his cell.

That was how he was able to escape before a second bomb fell.

“When they struck Ward 8… the door opened from the pressure and we walked out. God granted us safety, thank God,” he said, recounting the dawn attacks that targeted the detention center where he was held on Friday.

Others, wrapped in white body bags, were not that lucky. At least 80 people were killed when missiles hit a detention center in the Yemeni province of Saada.

Save the Children announced in a statement three children were also reportedly killed by air raids on Friday in the western city of Hodeidah.

The raids, which followed missile and drone attacks on the United Arab Emirates on January 17, have caused an international uproar and brought back attention to a forgotten and deadly conflict.

The Saudi-led coalition denied on Saturday targeting the detention center and added that it was not on no-targeting lists agreed upon with the United Nations and did not meet the standards stipulated by the Third Geneva Convention for Prisoners of War, according to the state news agency.

The attacks, the deadliest in more than two years, came amid an unprecedented escalation in the seven-year conflict with clashes raging over the control of Yemen’s oil-rich regions Shabwa and Marib, and an uptick in cross-border attacks.

The attacks on Abu Dhabi followed dozens of similar attacks on Saudi Arabian cities with armed drones and ballistic missiles.

In Saada, hundreds of people gathered around lined-up body bags on Saturday near the concrete rubble of the detention center, seeking information about their relatives. Some were checking the bodies hoping to identify their loved ones.

“We came from Amran province on a visit to find out that the prison has been hit by warplanes. This is another crime to be added to their other crimes,” said Salman Badi, one of the relatives.

Sultan al-Qahim, whose face was burned in the attack, stated he lost consciousness after a third bomb fell.

“I was sitting with my mates in our ward and then the warplane came and hit with a first strike. And a while later, two more hit. After that, nothing,” he noted in the Republican hospital in Saada, where most of the wounded have been treated.

The United Nations has called for “prompt, effective and transparent investigations into these incidents to ensure accountability”.