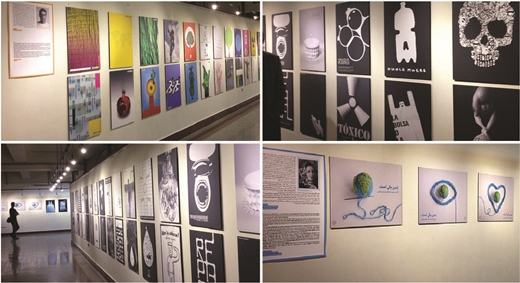 One of the most important steps needed to be taken towards improving the environment is to raise public awareness, and artistic work, ranging from films to paintings and graphic design, can set the scene for such accomplishment.

Parisa Tashakkori is an Iranian graphic designer whose works of art mostly carry environmental implications. Being a jury member for poster contests in Mexico, France, and Iran are some of her career highlights.

She was also awarded with an honorary diploma in the international design and illustration festival COW!!! in Ukraine in 2007, came in third in the 10th international poster triennial Ekoplagat in Slovakia in 2005, and was the prizewinner in the graphics category in Tehran in 2002.

The Tehran Times interviewed Tashakkori on the sidelines of the Fifth International Green Film Festival in Tehran. Tashakkori was also in charge of the international visual arts exhibition of the festival and managed to add Mexican and Brazilian graphic arts to the exhibition.

Here, Tashakkori explains her motives and the importance of the art in encouraging environmental preservation.

Q: What made you decide to choose environmental challenges as your main focus?

A: In 2001, as I was looking for a topic for my bachelor’s degree thesis, I used to go to the library to search through documents and books. I was looking for a radical subject which was not so widely discussed. After months of research and study, specifically on UNESCO magazines, I started to understand how important and serious environmental problems are in the world.

I checked with my professor, who welcomed my idea and introduced me to another professor. We decided to concentrate on environmental posters, and in the theoretical part of the thesis, I went through the activities of the artists who had tried to raise public awareness about environmental catastrophes.

Q: How can art foster environmentalism among the public?

A: The impact of art on environmental culture and its stewardship is more than you can imagine. In almost all communities, the artists are role models for the public and that’s why they can promote environmental culture. Graphic designers in particular can play a key role in raising the awareness and visual literacy of the public.

Images are more effective communicators and it has been proven that an image can convey a message much more quickly than a written text. Professional graphic designers can readily interpret the environmental crisis and the strategies to respond and phase out the crisis in a way that is easy to comprehend and appreciate for the public. By facilitating mutual understanding through their works of art, they can even involve the public to solve complex environmental issues.

Q: How can artists be encouraged to cooperate in addressing environmental problems?

A: I believe that artists have the potential to take part in projects tackling such issues and are interested in working in this field. What matters is for officials to ask them to work in this field. A good example of such cooperation is Tehran’s municipality’s efforts in setting up billboards in the city seeking social reforms. These have been designed by professional graphic designers for the past few years.

Q: How do you evaluate art exhibitions in Iran?

A: Unfortunately, in Iran artworks which are rather good often have no more meaning than a piece of paper, and become just a pile of trash after the exhibition, especially posters. The designers are forgotten too, and the award-winners’ works are never put to good use. That’s why there are hardly any memorable graphic designs about environmental events in Iran. The posters for these events are usually designed by unprofessional designers at the very last minute.

Even when we achieve some positive results in this field, the director will be changed, and all the hard work will be lost.

Q: How do you suggest improving such festivals and exhibitions?

A: We can take such festivals and exhibitions to the streets. Unlike paintings, which are kept in art galleries and showcased to artists and their friends, posters belong to the streets, where their audiences are. The public needs to see the posters closely, know what’s happening around them and even tear them down to show their objections.

How should a housewife know that plastic bags or bleach are detrimental to the environment without being informed about their damages? I’m sure that if they knew about their harmful effects, they would stop using them and would change their lifestyles.

Posters are not being used efficiently in Iran. I strongly believe that environmental predicaments are so significant that they need to be broadcast on TV as well as showcased on the streets.