Story of Afghan Woman Who Went from Refugee to Military Pilot 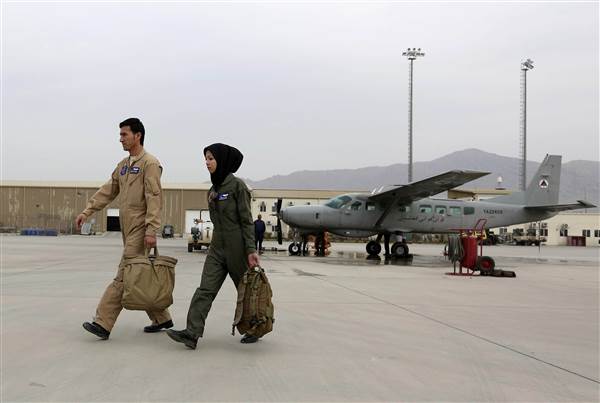 This is what happened to Safia Ferozi, the second Afghan female pilot, who was a refugee during her childhood.

According to a Farsi report by YJC, Captain Safia Ferozi, 26, who spent her childhood as a refugee, is now a shining example of how an Afghan woman can be successful.

Safia pilots a Cessna 208 Caravan turboprop to transport army forces. She is married to another pilot whom she met in her unit of service. They are both members of a small Afghan Air Force, which has a key role in fighting against Taliban insurgents.

Ferozi and her family left their home in Kabul and sought asylum in Pakistan during Afghan Civil Wars in the 1990s. They returned to their country just after the fall of Taliban in 2001.

Before she finished high school, Safia saw an advertising message on television which invited women to join army forces. So she enrolled in The National Military Academy of Afghanistan after her graduation; however, students were announced after a while that the Afghan Air Force intended to employ women to take pilot courses.

Among 13 female students, Safia was the only one who managed to pass all entrance exams and receive training.  She met Captain Mohammd Javad Najafi while being trained in Herat in western Afghanistan. They got married two years ago, and have an 8-month-old daughter named “Narges”. Her husband always encouraged Safia in her ambitions.

Captain Ferozi finished her training courses in 2015, and is one of two Afghan female pilots in recent three decades. During 1980s, several female pilots worked under the supervision of The Soviet Union in Afghanistan. Niloofar Rahmani, who began her career at 2013, was the first Afghan female pilot in 30 years, and the first to pilot a fixed-wing aircraft. Now she is in the US to receive training in navigation of large transport planes such as Lockheed C-130 Hercules. However, she recently declared that she will seek asylum in the US and won’t come back to Afghanistan.

General Mohammad Radmanesh, the spokesman of Afghan Ministry of Defense, announced that 195,000 army forces serve in Afghanistan, among them are 1,800 women. He went on to say that in the next seven years, women are due to form 10% of Afghan military forces.