Special Attractions You Must See in Iran Have you ever heard about Badab-e Surt? What about the hottest place on Earth? Have you ever seen Mangrove Forests? If you like to visit these places, and much more, it’s time for planning a trip to Iran.

Thanks to the amazing nature of Iran, and diverse weather conditions of the country, there are a number of special attractions in Iran.

Here, we are going to briefly introduce some of the most beautiful and breathtaking attractions in Iran to choose your best Iran tours.

One of the must-see places in Iran, especially for those who have an interest in geology is the Badab-e Surt. It is located in Mazandaran Province in northern Iran, about 100 kilometres south of the city of Sari.

The area consists of golden, orange, and red stepped terraces of sedimentary rock, formed by deposits of minerals carried from nearby hot springs.

The two springs of the travertine landscape have medicinal properties; and the glistening flats are amongst the most photogenic sites in Iran.

To take a wonderful picture of this amazing natural wonder, we highly suggest having a visit to the place early in the morning or at sunset.

Mount Damavand may not be the most beautiful landscape in Iran, but for sure it is the most popular one among all local people. People living in Tehran, who have the chance to see the snow-covered peak of Mount Damavand on a clear day, love the mount in particular.

The fame and popularity of this peak among locals can be compared with the love of Japanese people for the Fujiyama Mountain.

Mount Damavand is actually Iran’s tallest summit and the highest point in the Middle East with 5,671 metres’ height.

To go on trekking and skiing on Mount Damavand, please read more about Skiing in Damavand or check our ski tours.

In Farsi ‘Lut’ literally means bare land without water and devoid of vegetation. The desert is situated in the south-east of the country. Its eastern part displays a low plateau covered with salt flats, while the center displays a series of parallel ridges and furrows.

From June to October, strong winds sweep across this arid area. In 2016, this famous attraction of Iran was inscribed on UNESCO’s World Heritage List. The desert is a large salt desert, and actually the world’s 27th-largest desert with an area of 51,800 square kilometers (20,000 square miles).

The main attraction areas of Lut desert, include Gandom Berian, Shahdad Kalut, and Rig Yelan. In addition, the desert is home to diverse animal life, including insects, reptiles, and desert foxes.

Lake Urmia, previously known as Lake Rezaiyeh, is located in the northwest of Azerbaijan District. According to the latest country subdivisions, Lake Urmia lies between East Azerbaijan and West Azerbaijan Provinces.

After Anzali Lagoon, The National Park of Lake Urmia is one of the most interesting natural habitats in Iran.

The UNESCO has registered this ecosystem as an internationally protected area. Iranian Department of Environment has also identified most parts of this lake as a national park.

Lake Urmia is the biggest inland lake in Iran and the second Salt Lake in the world. It is the largest water of Western Asia which is located in the northwest of Iranian Plateau.

The lake is mostly fed by Zarrinehrud, Siminehrud, Aji Chay, Gadar, Shahar Chay, Nazlou, and Zola rivers; and has a salty water.

The UNESCO registered the Shushtar Historical Hydraulic System with all its items as a World Heritage Site in 2009; referring to the system as a “masterpiece of creative genius”.

An interconnected set of bridges, weirs, dams, mills, water cascades, canals and tunnels has shaped the hydraulic system. The main material used in the complex is granite, plaster of lime and mortar.

The famous French archeologist; Jane Dieulafoy referred this ancient attraction of Iran to the largest industrial complex before the Industrial Revolution.

If you would like to visit this amazing construction, and at the same time interested in photography, our Iran West’s Photography Tour is the best choice for you. 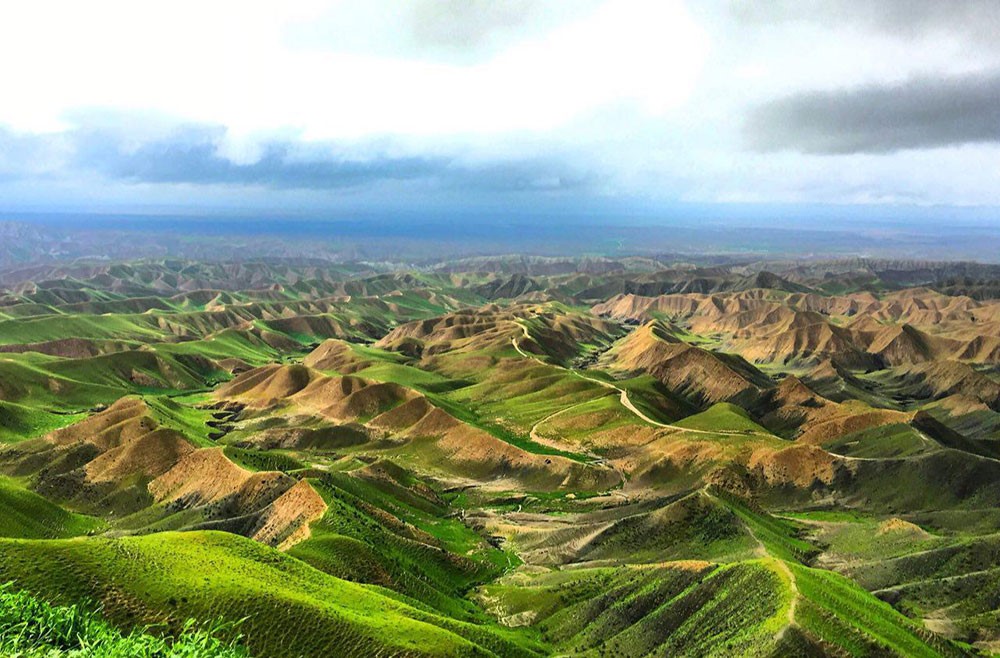 Turkmen Sahra (meaning Plain of Turkmen) is for sure one of the most beautiful landscapes in Iran. The region is located in the northeast of the country, near the Caspian Sea, bordering Turkmenistan country. The majority of the inhabitants of the Turkmen.

There are breathtaking rolling green hills remain virtually untouched and tricky to access without your own car. One focal point to head to is the Khaled Nabi cemetery, notable for its tombstones.

Qeshm Island is a beautiful island with a unique GeoPark in the southern part of Iran, located in the Persian Gulf. This amazing island is home to some of the unique and amazing wildlife and monuments.

The culture of its residents is a mixture of Iranian and Arabian cultures; due to the fact they are living in the middle of two regions.

If you are interested in visiting some less-seen and remote places, Qeshm Island would be an ideal place for you.

The island has beautiful landscapes with a great sandy beach, in addition to a number of attractions; to name Chah Kooh canyon, Harra Forest, Kharbas caves, Salt caves, and Portuguese Castle.

One of the most amazing ecotourism sites in Qeshm Island and Iran is the Mangrove Forest. The vegetation covers about 2,000 meters2 in southern parts of the country.

The tree trunks become visible and invisible along with the sea level’s rise and fall during the day; which is caused by the combination of the effects of the gravitational forces exerted by the Moon and the Sun and the rotation of Earth.

These trunks have amazing usage and filter the salty water of the sea. 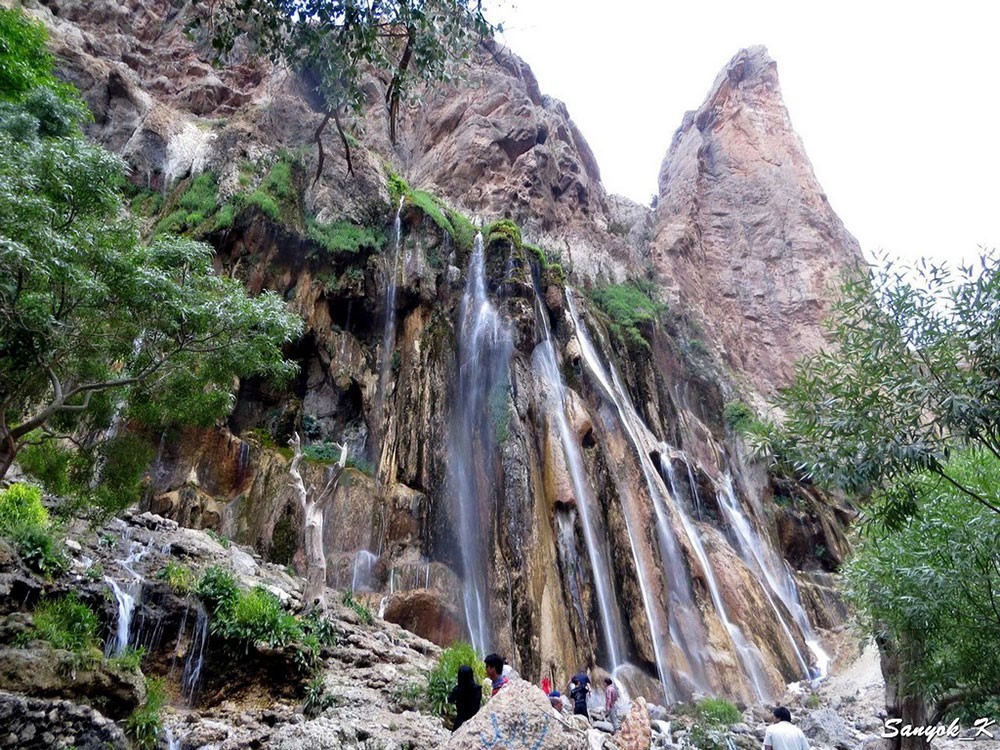 The amazing Margoon Waterfall is secretly hidden inside the mountains of Sepidan region. This area is heaven for nature lovers due to its spectacular fountains and rivers.

There are numerous flowers on both sides of the way through the waterfall. It is worth to mention that the best time to travel to Margoon Waterfall is during spring and summer; as in wintertime the road might be snowy and it is dangerous for you to reach the place.

You can drive to the waterfall, but you have to park your car about 800 meters before the waterfall entrance; because no vehicle can pass through further. Also, you have to do a little hiking to get to this lovely place.

If you are interested in visiting this amazing waterfall, you can join us in our Iran Nomadic Escapade Tour.

The ziggurat of Tchogha Zanbil is the largest and the best-preserved one with this architecture. The complex listed as the first Iranian site in the UNESCO World Heritage list in 1979.

The complex consists of an enormous ziggurat, which is believed to be the home to priests and servants. There are 3 walls around the ziggurat to protect the main building and help you identified the main town.

The ziggurat has a 105-meter length on each side and about 25-meter height in 5 levels. It had been crowned with a temple.

To visit some of the most special attractions in Iran, including the Tchogha Zanbil Ziggurat, join our Iranian World Treasures Tour. The UNESCO listed the city of Bam and its cultural landscape as a World Heritage Site in 2004. The most interesting site of the city is the Arg-e Bam (Bam Citadel) with a history of 2,000 years at the Parthian Empire (248 BC – 224 AD).

Arg-e Bam can be divided into two main sections. The rulers’ quarters are located in the heart of the citadel, on an elevated floor that makes overseeing the city more convenient.

However, most of the buildings were constructed during the Safavid dynasty. It was the crossroad at the most important trade routes. The Citadel is the best example of a fortified medieval town built in mud layers. Unfortunately, most of the citadel was destroyed after the earthquake of 2003.

To visit this wonderful citadel, amazing gardens of date and citrus in Bam, and enjoy the marvelous weather of Bam in fall and spring, join us at our Iran Epic Cities Tours.

The Ali Sadr cave with 11 kilometers length is the world’s largest water cave. It is situated 75 kilometers to the northeast of Hamedan; in the heart of mountains called Subashi in the Kaboudar-Ahang town.

The main chamber of the cave is 100 meters by 50 meters and 40 meters high. With a network of channels, lakes, and watery passageways spreading out over several kilometers, Ali Sadr Cave is one of the largest subterranean water complexes in the world.

To go inside this breathtaking cave and watch one of the most beautiful caves in the world, take a look at our Encrypted Iran Tour.

Now that you are more familiar with special attractions in Iran, why not plan a trip to the country and watch these amazing places?

Don’t forget to benefit from our 20% discount on all our Iran tour packages from the first of December, till the end of February.

We, at Eavar Travel Agency, as a leading Iran Tour Operator, always try to deliver our services with the best quality and price.

It is important for us to not only deliver great services but also provide an unforgettable experience for all of our clients.