Shamkhani, Hammond call for boosting all out ties 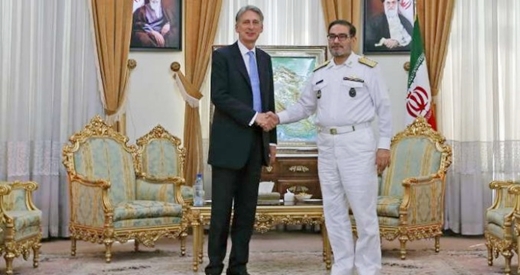 Iran expects the British government to change its approach toward Iran and stay away from non-constructive misunderstandings, said Shamkhani in the meeting with Hammond.

Shamkhani told Hammond that moving toward sustainable relations based on trust-building can secure the mutual interests of Iran and Britain.

The Iranian official said that Iran expects the British government to change its views toward Iran and keep away from non-constructive misunderstandings.

Shamkhani said that understanding the real source of Islamic Republic’s power by the British government can help boost ties between Tehran and London.

He said that the Islamic Republic of Iran’s power has its roots in the nation’s support and the Supreme Leader’s insight, adding that Iran adopted a balanced and stabilizing regional and international policies.

Shamkhani referred to Iran’s warnings about the spread of terrorism in the region, saying that the fight against terrorism and extremism needs respect for national sovereignty and independence of governments.

Iran and Britain have a similar stance toward the fight against ISIL, regional stability and closer economic cooperation, the official noted.

He said that supporting the nations which have been subjected to oppression by bullying powers to reclaim their legitimate rights is part of Iran’s foreign policy.

The British foreign secretary, for his part, stressed the important role of Iran in the settlement of regional problems, including terrorism.

London is keen on boosting sustainable ties with Iran in all fields, including economic and regional cooperation, he noted.