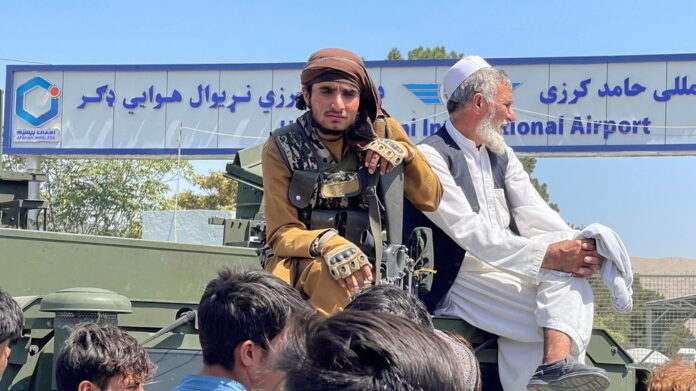 The Taliban might think about selling military hardware abandoned by the United States and its NATO allies in Afghanistan if humanitarian situation takes a serious turn for the worse, Russia warns.

“A very dangerous aspect is that we all know about the large number of weapons, which the Americans and generally NATO forces have left behind in Afghanistan. That said, there are no signs, so these are purely my conjectures but, based on logic, just imagine that instead of state structures, terrorist groups interested in buying these weapons, begin turning to the Taliban. This may prompt the Taliban to start thinking about that if they are left without any means to keep the country alive,” Special Russian Presidential Representative for Afghanistan and Director of the Foreign Ministry’s Second Asian Department Zamir Kabulov said.

In this situation, if the West decided “to stifle” Afghanistan “with the gaunt hand of hunger” under the new authorities, “this would yield a completely counter-productive result,” Kabulov added.

The Taliban radical militant group launched a large-scale offensive to seize control of Afghanistan after the United States declared its intention in the spring of this year to withdraw its troops from the country.

On August 15, the Taliban swept into Kabul without encountering any resistance while Afghan President Ashraf Ghani stepped down and fled the country. The Taliban declared on September 6 that they had taken control of all of Afghan territory, and on September 7 they unveiled an interim government in Afghanistan that has not been recognized by any country so far.

The Taliban are waging a real war on militants of the Islamic State terrorist organization on the territory of Afghanistan, Kabulov stated.

“The Taliban are waging a ruthless war on IS militants. In the course of a brief talk with [Russian Foreign Minister] Sergey Lavrov before the beginning of the Moscow format meeting, they told him about heavy casualties in this war. This confirms what we said earlier that the Taliban and now the current Afghan authorities are really fighting against the IS,” the Russian envoy noted.

Almost all participants of the Moscow consultations on Afghanistan expressed their readiness to consider recognizing the country’s new government, he continued.

“Clearly, Afghanistan’s delegation was hopeful of securing support and official recognition of Afghanistan’s new interim government. Almost all participants, with a few exceptions, highlighted their readiness to seriously consider the matter, but sort of in response to the authorities’ positive reaction with regard to all related issues. On many things, they [the new Afghan authorities] reiterated the statements they had made before. This concerns terrorism, drug trafficking and the need to make sure that Afghanistan’s territory is not used for attacks on the security of neighboring and other states. These were important aspects so we agreed to continue the work,” Kabulov noted.

The freezing of Afghanistan’s assets in the US and EU is ridiculous, they should be unfrozen, which Moscow will be pushing for, Kabulov said.

“Out of $9.5 bln worth of assets of the state over $8 bln [have been frozen] in the US, whereas $1.5 bln, as we are told, have been frozen in Europe. This is absolutely ridiculous, they should be unfrozen,” he added.

The national reserves are not connected with the Taliban movement (banned in Russia) and belong to the Afghan people, Kabulov noted.

“This was reflected in the Moscow-format final document. This should be addressed, and we will continue pushing for [unfreezing] with other international partners,” he stated.

Kabulov considers it necessary to give the reserves belonging to the Afghan people back to them since “if the west attempts to stifle Afghanistan’s new power” using hunger this may lead to the development of the drug industry and weapons trade from Afghan territory.

If the west wants it, it is on the right track. The impoverished Afghan population, whose share rises each day, will only have two ways out: to join the destructive international terrorist groups to earn keep somehow, or to emigrate to Europe on a mass scale, which Europe opposes, at least rhetorically. If they want something different, they should do everything to encourage the Afghan people to stay at home, but for that they should be provided with emergency humanitarian aid at the first stage, and with jobs at the second stage, so that the situation for each separate Afghan family is stable and predictable,” he explained.