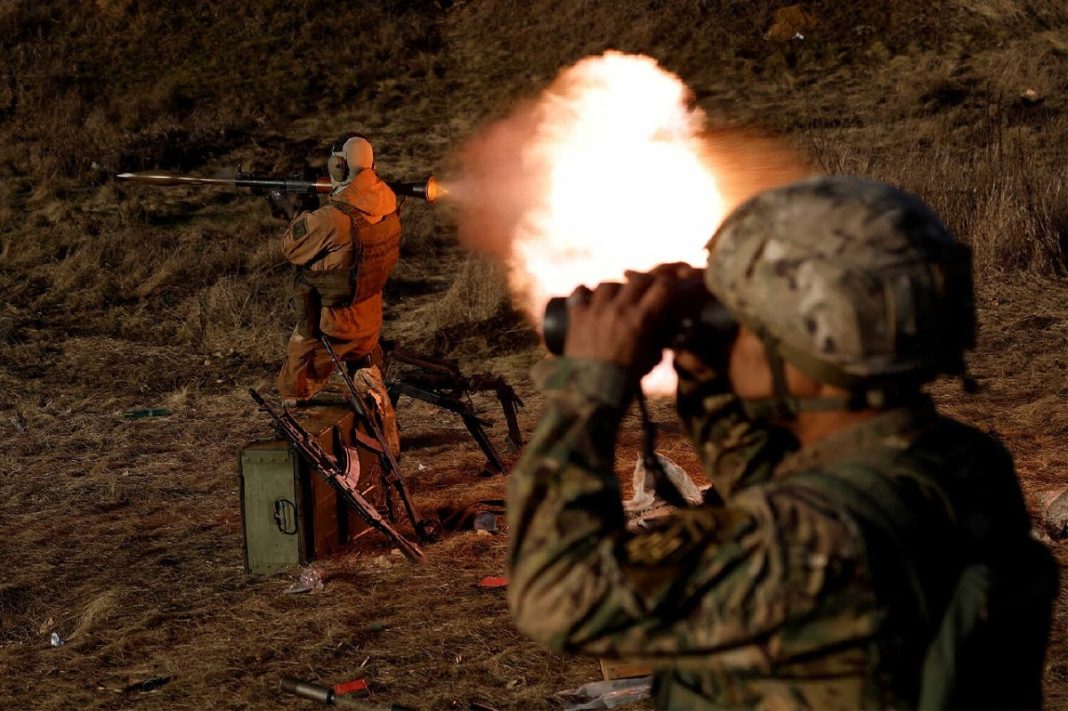 “This information is as true as the data that they have destroyed all of our HIMARS,” Sergiy Cherevaty, spokesman for the Eastern group of the Ukrainian armed forces, told the Suspilne media outlet, referring to high mobility artillery rocket systems (HIMARS) supplied by the United States.

Later, speaking to the BBC, Cherevaty called the claim “propaganda”.

Two Reuters reporters who visited the dormitories where the soldiers had allegedly been killed said there were no signs of a mass casualty event.

Sweden’s Prime Minister has said the Nordic country is confident Turkey will approve its application to join NATO, but said Stockholm cannot meet some of Ankara’s conditions.

“Turkey both confirms that we have done what we said we would do, but they also say that they want things that we cannot or do not want to give them,” Prime Minister Ulf Kristersson told a defence think-tank conference in Sweden, without specifying which conditions to which he referred.

Finland and Sweden signed a three-way agreement with Turkey in 2022 aimed at overcoming objections to their membership to NATO.

But Turkey has continued to block the bid, with Ankara saying the countries have not done enough to crack down on groups it considers to be “terrorist” organisations and to extradite people suspected of “terror-related” crimes. Turkish officials have most recently bristled at Sweden’s top court’s refusal to extradite journalist Bulent Kenes, who Turkey accuses of helping to plot a failed 2016 coup.

Moscow has said its army conducted a deadly “retaliatory strike” in the eastern Ukrainian city of Kramatorsk.

Russia’s defence ministry did not say when the strike occurred, but claimed “more than 600 Ukrainian servicemen were killed” when two buildings used as barracks were targeted in the city in the eastern region of Donetsk. The casualty number could not immediately be independently verified, but would represent one of the deadliest single attacks since Russia’s invasion of Ukraine began on February 24, 2022.

The ministry added the attack was in response to a Ukrainian strike at the beginning of the year on the Russian-occupied town of Makiivka, in which Russia said 89 of its troops were killed.

Ukraine did not immediately respond to the claim.

Earlier on Sunday, Pavlo Kyrylenko, the head of the Donetsk regional administration, noted Russia had launched seven rocket attacks on Kramatorsk, saying that “an educational institution, an industrial facility and a garage cooperative” had been damaged.

He stated there were no casualties.

Ukraine’s Prime Minister Denys Shmyhal said the war has resulted in a minefield of 250,000sq km (96,526sq miles) in the war-torn nation.

“It is currently the largest minefield in the world,” Shmyhal told South Korea’s Yonhap news agency.

The mined area, according to Shmyhal, is equivalent to more than 40 percent of Ukraine’s total land area.

“It’s not only making it difficult for people to travel, but also causing major disruptions in farming, which is one of our main industries,” he added.

As a result of “Russia’s armed aggression”, one person was killed and another eight wounded in the eastern region of Donetsk over the past 24 hours, Kyrylo Tymoshenko, deputy head of the Ukrainian president’s office, has said.

Overnight bombing by Russia in eastern Ukraine has killed at least one person, local officials confirmed.

A 50-year-old man died in the northeastern region of Kharkiv, Oleh Sinehubov, the region’s governor said on the Telegram messaging app.

The Russian invasion of Ukraine has unleashed the largest wave of refugees since WWII, the UN refugee body has said.

“More that 7.9 million people have fled the country, and another 5.9 million are internally displaced,” the UNHCR representative in Germany, Katharina Lumpp, said.

The total figure of almost 14 million represents more than a third of the country’s total population of around 41 million.

Two thermal power plants were damaged by Ukrainian shelling in Russian-controlled parts of the country’s Donetsk region, according to Moscow-installed officials on Sunday.

Preliminary information indicated injuries in the shelling in Zuhres and Novyi Svit, the officials stated on their Telegram monitoring channel.

Ukraine almost never publicly claims responsibility for attacks inside Russia or on Russian-controlled territory in Ukraine.

Ukrainian President Volodymyr Zelensky signed a decree on Sunday introducing sanctions against Russian film director Nikita Mikhalkov and 118 others, according to a document published on the website of Ukraine’s presidential office.

The sanctions include blocked bank accounts, the suspension of economic and financial obligations, the cessation of cultural exchanges and cooperation, a ban on entering Ukraine, the revocation of Ukrainian state awards and others. These restrictions will be in effect for ten years.

The Western aid to Ukraine is a working money laundering scheme, Head of Chechnya Ramzan Kadyrov said on his Telegram channel.

“I see that some are worried about the foreign aid to Ukraine. Do not worry! This is a working money laundering scheme. Western and Ukrainian officials will embezzle these funds, and no more than 15% of the entire aid will reach the trenches,” he stated.

Kadyrov also noted that there is no need to worry about hostilities currently happening on Russian territory.

“These are our regions, which opted to join our state for the sake of protection of their people from Satanist actions of Ukrainian and NATO nationalists,” he added.

Time is not on Kiev’s side in Ukrainian conflict: former US officials

Ukraine’s economy and military potential are currently fully dependent on the Western support while time is not on the side of Ukraine, ex-US Secretary of State Condoleeza Rice (in office 2005-2009) and former US Secretary of Defense Robert Gates (in office from 2006 to 2011) said in a joint opinion piece published by the Washington Post on its website on Saturday.

They assert that Ukraine’s economy and military capability entirely depend on supplies from the West, above all, from the US. If the Ukrainian army does not achieve a major breakthrough, Western pressure on Kiev to negotiate a ceasefire “will grow as months of military stalemate pass,” the authors note.

According to them, “the only way to avoid such a scenario is for the United States and its allies to urgently provide Ukraine with a dramatic increase in military supplies and capability — sufficient to deter a renewed Russian offensive and to enable Ukraine to push back Russian forces in the east and south.”

“What is needed now are decisions by the United States and its allies to provide the Ukrainians the additional military equipment they need — above all, mobile armor,” the former US officials write.

According to the Pentagon’s estimates, since the onset of Russia’s special military operation in Ukraine, the US has provided over $24.2 bln in military aid to Kiev. Russian Foreign Minister Sergey Lavrov and other Russian officials have repeatedly noted the danger of Western weapon supplies to Ukraine ending up in other regions. Russian Ambassador to the US Anatoly Antonov cautioned that the militarization of Ukraine by the West directly threatens European and global security.

US asks Italy to send air defense systems to Ukraine

The US has asked Italy to provide air defence systems to Ukraine during a conversation between two officials.

National security adviser Jake Sullivan asked Francesco Talo, an adviser to the Italian PM, Giorgia Meloni, for Rome to provide the systems as soon as possible, according to the Italian newspaper La Repubblica.

Sullivan referred to the Italian-French SAMP/T air defence system, according to undisclosed sources in Washington quoted by the newspaper.

After a conversation with Meloni, President Volodymyr Zelenskiy announced on 27 December that Italy was considering supplying Ukraine with air defence systems.